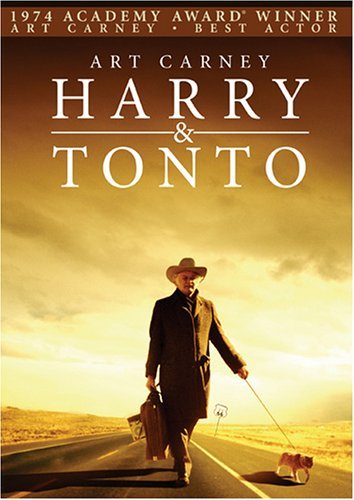 This review is of the TV-14 edited version of the film. All thoughts below should be addressed as such as a review of the unedited version would be more negative
Harry and Tonto is a movie with a fairly basic premise. The two of them are going on a big adventure and getting to see the world. Nothing wrong with that in the slightest of course but I would say the execution was not very good at all. It ends up being rather boring a lot of the time but the writing is always very weak. It reminds me of some Woody Allen films from a while back where it’s just the characters talking but the script is so bad that it falls on its face. That’s pretty much what happens here so you don’t even have that to keep the film afloat.

The movie starts by having Harry get mugged again. The neighborhood used to be good but it’s really been sinking a lot. So he goes to move in with his family but it’s rather tense there as the place is really small. One of his grand kids has taken a vow of silence for some reason and only his son is glad about him staying. So Harry decides to go on a journey with his pet cat Tonto. Along the way they run into a girl who ran away from home named Ginger. The initial goal is to find more of Harry’s family members and even an old flame before he decides where to stay but along the way it just becomes more about experiencing life.

A movie like this can only survive if the characters and writing are both really great. That would probably be the case for a 50s or 60s film but one this late in the game has more of an annoying dialogue style than anything else. When the conversations aren’t about mundane things like the weather, you have Harry being shocked at how depraved the world has gotten. He’s able to hook up with a random girl during one of the drives for money and the runaway Ginger is not shy about just stripping down. Other characters talk to him about when the last time he had an affair was and it’s like nobody ever grew up here.

The romance that we do get later on in the film is more of a cringeworthy affair. Then to show us that Harry can never really be happy, he’s thrown for another loop near the end. The world is moving fast and just won’t let him catch up. In theory he’s good now but this rollercoaster had too many pitfalls. By the end I wouldn’t say there are any real likable characters. Harry’s son would be the best for sticking by him the whole time. The rest of the family wasn’t too helpful like the guy who lost all his money, the son’s wife who wasn’t subtle about wanting him to leave, the daughter who didn’t even try, etc.

Harry was definitely on his own. Harry was a prideful man too so it’s not like he tried super hard though. He did the best he could to keep his old place but once that was gone then it was pretty much all over for him. Tonto was good the whole time though. He always ended up making you nervous though when he’d run off in general because this was the kind of film that wouldn’t pull its punches.

I think Harry may have ultimately had a better time staying in his neighborhood. Sure it was fairly dangerous but at least he knew everybody there. I’d say the best moments were when the film would slow down to actually let him enjoy the adventure. Like going to the casino and trying to play dice for a bit. At least there he got to have a little more fun before unfortunately not being able to make it to the bathroom in time. The crazy adventure with the chieftain in the cell was certainly something that’s for sure.

Maybe Harry needed to have a dog for some more fun Hijinx. But there really isn’t a lot to the film so it does come down to the human. Harry just wasn’t interesting enough to lead his own film. I dare say that he needed to be a little younger to have an easier time of it. Otherwise you have to be super charismatic and likable which didn’t really work here. Having Harry be a very confident guy who figures he’ll have a new place in no time flat could have been a good angle to have here.

As for the writing, maybe you needed more of a solid hook. If not, I think some humor could have gone a long way here. Yeah, this time I would say throwing in some jokes would not have hurt. It would be a good way to keep the adventure light and also give the characters some more substance to talk about. Just something to make it be a lot more interesting because otherwise you’ll be falling asleep here. Also, they probably shouldn’t have written Harry as having a wife who ultimately died before him because it just makes him look even worse when he is still interested in other women and messing around. At his age he should be all over that and definitely not going for a rebound. That’s really it, just live the rest of your life with a lot of fun and enjoyment but not trying to start another relationship like that.

Overall, A film can certainly get by without having much of a focus or a plot but to do that you need to be very funny or wholesome. One or the other can certainly do the trick but when you’re neither then that is going to be a really big issue. This film never ended up getting interesting. It’s a shame because a journey movie will usually be good even if just to see all of the various sites along the way. Maybe if that guy who was with Ginger could have stayed longer then he would have been a good addition to the party. Could have added something to the dynamic I suppose. A subplot that wouldn’t end tragically like Harry finally getting to meet the girl who liked him way back in the day.