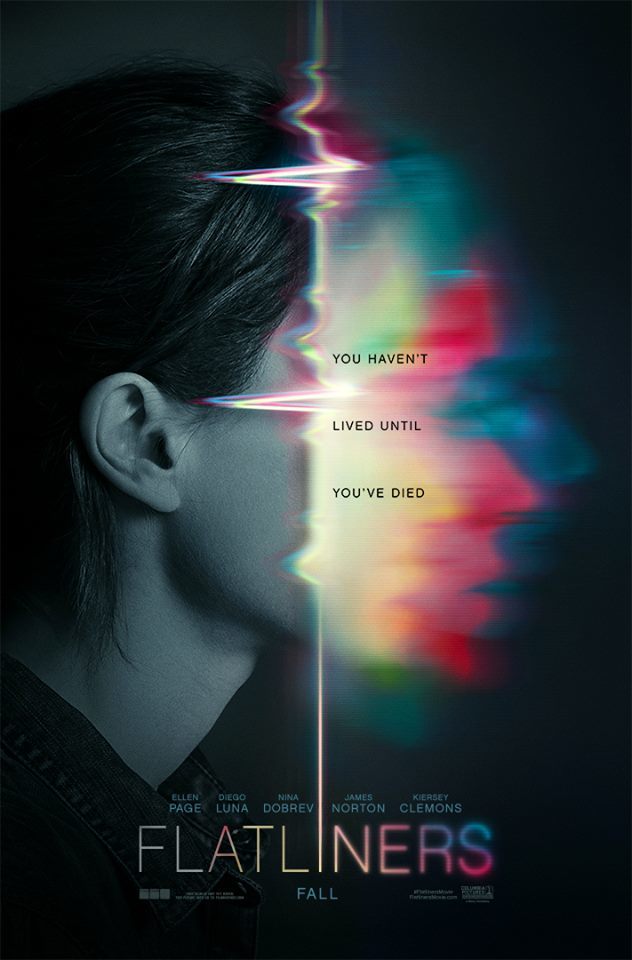 It’s been quite a while since I watched the original Flatliners. I wouldn’t say it was a particularly good film to say the least. This one does improve upon it in some way and so while it’s not as ambitious, it’s a more stable film. The main characters still aren’t particularly likable here though and the whole plot only kicks off because they make the wrong calls.

So the movie starts with Courtney figuring that she should probably try to die real quick to see what the afterlife is like. She plays on Jamie’s feelings for her to trick him into going downstairs and invites Sophia as well. The idea is to put her under and after she’s dead, revive her in under a minute. This way her brain activity is unaltered and in theory she will not suffer from any side effects. That’s the complete plan here and they pull it off but only thanks to Ray showing up at the end to save the day. Now Courtney is a super genius who is heading the class and the other students except for Ray all want a turn. Is there a downside to doing this?

Short answer is yes, of course there is a downside. This wouldn’t be much of a movie without one right? So they’re opening the doors to the next world and by doing so, their personal demons are appearing. Each of the characters has had some kind of trauma or made a big mistake back in the day and it’s coming back to haunt them. Unless they can face their fears, this will be game over so they have to move fast.

One big difference here is that their fears don’t seem as dangerous here. Perhaps they are and the heroes just didn’t give them enough of a chance but in the first film these dreams were knocking the stuffing out of the main characters. They would come out of nowhere and just turn violent. In this movie they mostly just sort of stand there in the distance and glare at the heroes. Rarely do you feel like they’re in a lot of danger. The closest might have been when Marlo was in the basement with the lights off but even then the spirits didn’t take her out. You feel like the ones in the original film would have pulled that off.

Of course the film is greatly toned down from the original so that does work wonders for this one. No animal violence or anything crazy like that. The film isn’t all that violent either, it’s fairly tame. So in that way it’s a very different kind of horror film because you keep waiting for the main characters to be taken down and then it just doesn’t happen. I guess you could say that the heroes are very lucky in that respect since they wouldn’t last nearly as long in other settings.

The ending of the film misses a really big chance to go for a twist ending though. The way the scene was shot it felt like something was coming and there were a lot of interesting ways this could have gone. I was thinking about a certain character just popping out to get everyone or something like that but instead it’s played straight with a fairly happy ending. Not exactly what you would expect for a horror film either so this one really is unique.

Of course, the issues come with the fact that this one is still eager to make the teens as annoying as possible. The romance is very weak with a lot of affairs all around. The characters can’t stay professional with each other for a single moment. They also choose to all go under and effectively take the easy way to being geniuses. This comes complete with a lot of crazy parties and everything though. The characters confirmed they take drugs so they were able to recognize this as a similar effect. There’s no real point to the scenes at all though. It’s a really weird side effect but one that could have been shown a lot differently than to have everyone go mental like this.

Courtney deserves most of the blame for being the one to start up with this idea. It was a bad idea right from the jump and she pressed ahead anyway. Of course everyone else is guilty for jumping in as well. Only Ray stayed strong and tried to warn them against this. He also seemed to have the strongest moral compass like trying to tell Marlo to correct her mistakes and all. You have to give him props for trying even if ultimately she was tough to convince. He is easily the best character and someone who actually cared about being a doctor. The rest seemed to just be messing around a lot.

Jamie is the flirt of the group who is constantly having affairs so there’s no way you were going to like him. His big mistake from the past is also an absolutely massive one that just makes him look even worse. It’s another one of those moments that’s really hard to recover from. Same for Sophia who looks really petty in how far she took things. Wrecking someone’s life in an instant is not something that you can easily take back. Based on how the characters acted before being forced to relive their fears, I have my doubts that they learned much of anything.

Of course the literal threat of death shocked some sense into them but it’s sad that it took this much. Then of course Marlo had her big mistake that quite directly ruined someone’s life. Yeah none of these characters are good role models. In a way the film is almost like a Christmas Carol in how the characters reflect on their pasts, just with a horror element to it. This one is able to be a lot more direct about the second chances kind of message to it since the body count wasn’t quite the same as in the first one. With less scares you have time for more character development.

It’s just that once you make the character bad enough, the development isn’t really going to save them at that point. That’s why you have to really hold back when making the characters delinquents in the beginning because otherwise this is what you get. You could be forgiven for not realizing that this is a horror film by the way because there are barely any scares here at all. Sure, you get the fake jump scare for the elevator but for the most part the scenes are fairly light. The scariest moment was probably Jamie biking through a dark street by himself in one of the dreams and even that wasn’t all that intense. You keep thinking something is going to happen but nothing does which is a common event in the movie.

Overall, Flatliners beats the original but it’s still not a good movie. At the end of the day the characters are annoying and the writing is weak. The romance isn’t any good and it feels like the movie is a little confused about what it wants to do. It even takes a long while for the actual plot to start. They don’t start hallucinating about their past until you’re very deep into the movie so the pacing could have used a little work too. The concept of having to confront your past or face destruction is an interesting one though. In the right hands I think you could definitely do something really good there. These just weren’t the right hands apparently.