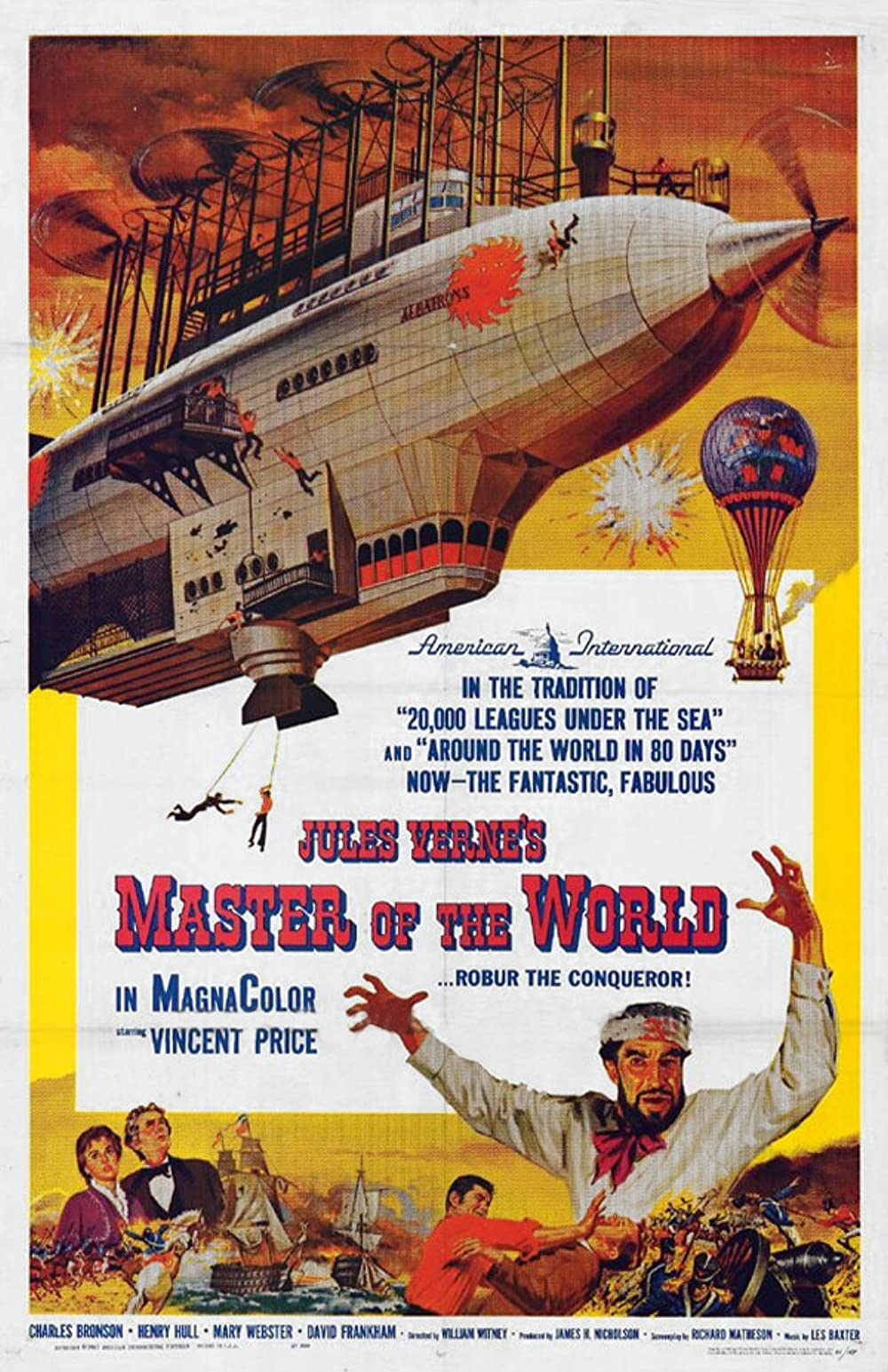 Vincent Price films tend to be a lot of fun, at least his contributions to them. I can’t say that all of his movies are actually amazing or anything like that but he knows how to have a good time. This is a solid installment in his filmography and it’s a good, classic tale about wanting to stop war. Ultimately many heroes and villains have tried to stop it in these movies but they all come across the big issue that it is just about impossible to stop through normal means. This movie handles that rather well.

The movie starts out by showing us a lot of different attempts at making a plane. Unfortunately it took a lot of tries to get them right and so Prudent and Evans debate a lot about how their plane should be built. Ultimately a government agent named Strock appears and lets them know to just try them both. They head up in a hot air balloon but are kidnapped by Robur and taken aboard his giant plane. Robur explains that he wants to attain world peace and the way he will do this is to destroy all weapons of mass destruction on the planet. Any machine that can hurt someone will have to be destroyed so their go the battleships and tanks. Unfortunately he will only give a brief warning before firing so there will be mass casualties. The heroes need to find a way to stop this guy but how can they?

First off, Robur is an interesting villain. He really hopes that the characters will agree with him but of course the cost is just too high. What I like about him is that he does actually give them some time to try and come up with an alternative. Of course they aren’t able to because in a way there is none. This would be the only way to possibly try and remove wars, but even then it wouldn’t work. If Humanity has shown anything over the years it is that they will keep on creating new weapons forever and nothing can stop that. Robur’s airplane would only serve to embolden the governments to create more things in secret.

Now, the plane can apparently cross the entire Earth in 10 days so he could possibly deal a ton of damage in the meantime. The rest of the world have no combat planes ready yet so if he kept on carpet bombing the way he was now, it’s hard to see how anybody could stop him. It’s why supremacy over the air was always such a big thing in every war. If you control the skies then you control your destiny. So it’s lucky for the world that the heroes did go aboard or that would have been it.

In a way Robur’s pacifist ideals towards directly taking a human’s life were his own undoing. If he had simply shot the characters down then he would have been safe. Villains with misguided ideals that think they are the hero of their own story definitely make for a compelling character and this guy was no different. He’s certainly the highlight here.

As for the main characters, they definitely tend to bicker a lot. You’ve got Evans who is constantly jealous and mistrusting of Strock. After all Strock gets along very well with his fiancé and so Evans needs him to fail. What better way to be top dog around the place again than to realize that Strock has thrown his lot in with Robut? Evans comes across as really petty and naïve throughout the film. He tries to say that they shouldn’t lie even to the villain because of honor and all that but Strock correctly points out how that won’t save anybody. Honor is all well and good at times. There are certainly lines you shouldn’t cross in any situation but this wasn’t one of them and Evans really didn’t seem to know how the world worked.

Meanwhile Strock was very reasonable the whole time. He doesn’t get caught up in his emotions the way that the others did all the time and that allowed him to plan ahead and do some real good. He would put more thought into his actions in one moment than the rest would for their entire appearances. I thought he single handily gave the heroes a chance while the rest would have completely crashed without him.

Prudent is a genius and all but he’s not really ready to be on the field. He does better than Evans but that’s not exactly an achievement now is it? Dorothy is nice enough but she does tend to blame both sides when Evans and Strock argue even when it is completely Evans’ fault. I would like for her to just call him out instead. By the end of the film they are finally ready to work together, it just takes a long while to actually get to that point.

Ultimately this film is about a difference in ideals that cannot be bridged by any kind of discussion or negotiation. There are times when fighting is the only way to solve an issue and this is one of those times. Everyone (All reasonable people) would like to end war once and for all. War only brings a lot of destruction and trauma in its wake but there are no reasonable ways to end it. Short of the world being destroyed, it’s not going to happen. Robur’s plan wouldn’t have worked either even though he was so confident about it so Strock had to stop him. At least maybe he will think twice about selling it to the government though. The heroes were quick to mention that but doing so would absolutely guarantee an escalated level of violence in the end. Ultimately it’s not possible to stop technology so it’s inevitable that this kind of tech will appear someday but why speed it up? (Of course this wouldn’t even be considered high end tech in today’s day and age)

Overall, I liked this film quite a bit. It’s rather low key and even to the end Robur is treated as a villain who made the wrong moves but didn’t crack. He treats his minions well and same with his prisoners. He was just on the wrong path. The writing is good and the movie’s pacing is solid. It all goes together rather quickly in its journey to the end. I didn’t have any issues with it. Of course I didn’t like Evans but he made for a decent antagonist when you look at it that way. This is a very safe movie with a good amount of positives and no true negatives. It may not be very ambitious but it tells a good story and at the end of the day that’s what you want to see.