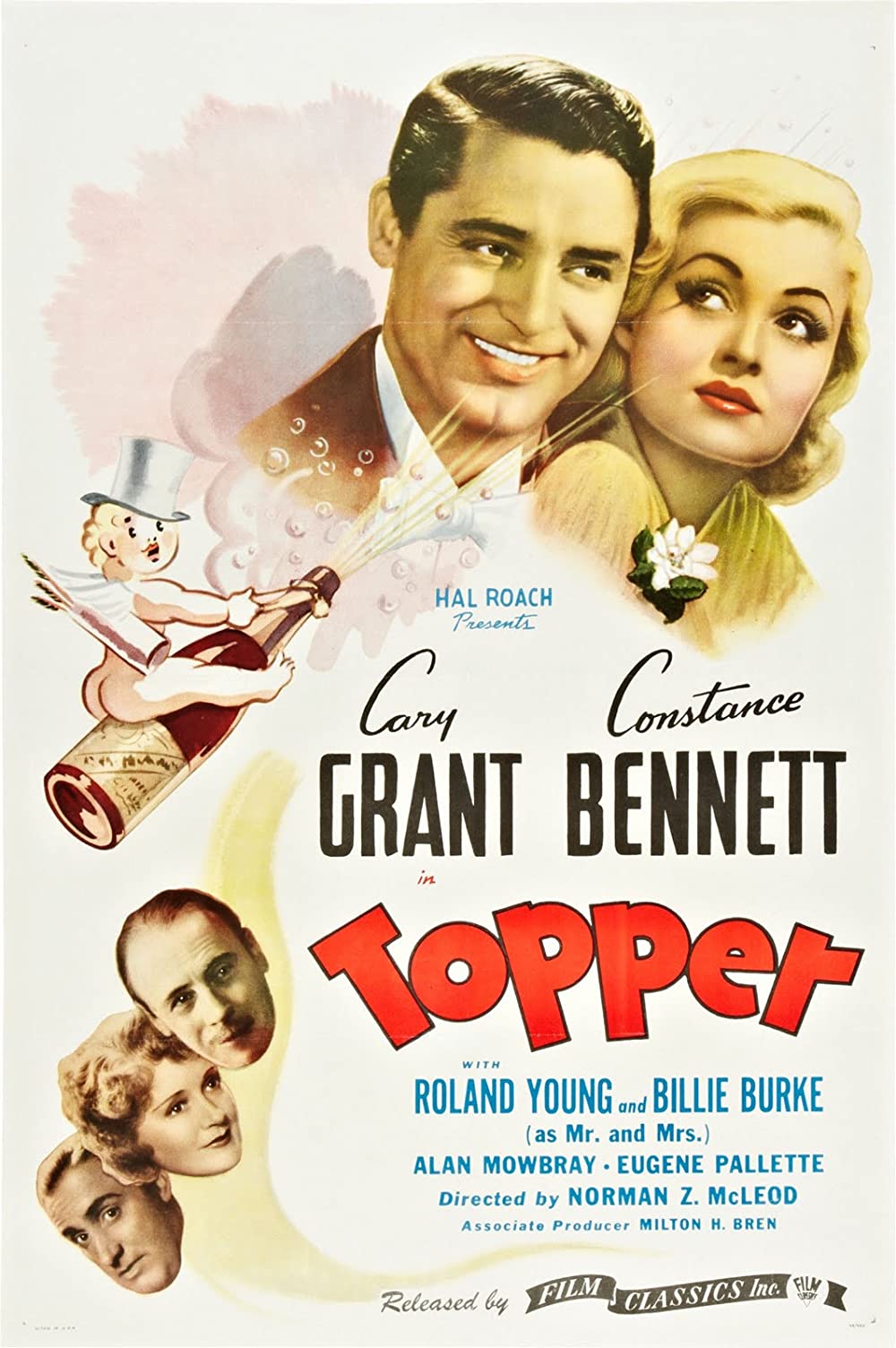 Topper is one of those films where everyone acts rather crazy so it becomes a bit of a surreal kind of comedy title. It’s got its share of humorous moments without a doubt but I wouldn’t say the character cast is quite as solid as some of the other comedy films. That keeps it from getting to the next level but the movie is still fun enough so I would recommend it to people looking for a fun time.

The movie starts off by introducing George and Marion who believe in just having a good time no matter how inconvenient it is for everyone else. In particular George seems to like messing with his company and driving every meeting off the rails for no reason. Well, one day he takes the corner a little too quickly when driving so George and Marion are instantly destroyed. They then awaken as ghosts and seem to be stuck on the planet. Marion figures that they have to do a good deed in order to move on and their best bet is to help out old man Topper.

Topper is a married man who hasn’t gotten to have a whole lot of fun so far. His wife prohibits anything that she deems to be without class such as owning a cool car or doing anything outside of her planning for the year. As a result Topper isn’t a very happy camper. George figures he may as well go along with this but he isn’t really happy about the prospect. He’d rather have fun on his own than help someone else out. Will they really be able to help Topper or is their idea of “Help” actually going to hurt him?

Naturally there is no concrete evidence given to the main two that doing a good deed will help out at all so they’re really taking a swing in the dark here. They also have to hope that it’s a package deal because George is not helpful during the movie at all. He follows Marion’s lead but for the most part is just the same guy that he always was. He keeps on drinking and messing around but now that he’s invisible he can mess with more people. You could almost call him an antagonist if you really think about it.

I guess he’s not actively hurting anyone but at the same time he is just making a mess of things. That makes for an entertaining character. As for Marion, well she likes to do things at her own pace but is trying to help Topper at least. Her flirting and teasing of him can go a bit far though. She is still married to George after all and Topper doesn’t have the strongest will so trying to lead him onto the wrong path isn’t a good idea. In fact I would say that’s the weakest part of the film as he does actually seem to get tempted. His marriage may be no fun at the moment but he would still needs to end things before starting something new.

This hurts Topper as well in my book. At the end of the day it feels like he could have solved all of his problems if he could just talk more directly and not simply taker things as they happen. Why not have more of a candid talk with Clara as opposed to just feeling sorry for himself? The guy just needed to have more backbone and he’s whiny enough where he doesn’t really work as the lead.

The movie is good in spite of the characters rather than because of them. The cast is just very weak in the end which is unfortunate. You could easily have made this premise a lot more effective with a solid cast of main characters. The rules of being a ghost are also rather interesting as for once they can fully interact with everything. In fact the ghosts can even allow people to see them if they want to. It takes up ectoplasm which seems to regenerate over time a bit so for the most part they stay invisible but they are absolutely around.

Here’s the interesting thing, if they can’t move on right now, they could have just pretended that they survived. Think about it, they’re fully physical and are always around. What’s to stop them from just going back to the house and living it large? They can still eat and drink as well so there is no real difference from being alive except that they can turn invisible. It actually could be interesting as an alternate premise here, like just going all in with that story instead.

Of course that would be totally different but it’s nice to think about. We do have a good climax with the cops trying to take the two ghosts down but of course they aren’t quite strong enough to pull that off. Just being invisible is such a huge benefit that a single person probably could escape a whole army for a long while. Particularly back in these days before we had a lot of great technology at the ready.

By the end of the film it feels like the main two have been very lucky too in that they actually did guess correctly that they needed to do a good deed and that they actually succeeded. Because you can make a decent argument for them not doing a good deed at all. They were really just messing around with Topper the whole time and things could have easily gone sideways. I suppose the restriction cared more about the results than the method. That or they may have triggered some other condition to moving on that was totally unrelated. It’s not like there is any way to know since it was all assumptions by the main characters.

Overall, Topper is a decent comedy film with some laughs. I liked the premise more than the execution but if you’re looking for a light hearted title then this should still fit the bill for you. It flows by very quickly and it’s not like I had any major issues with it. It would be interesting to see if the sequel can match the original. In theory it very well could but it may be a while before I check that one out.