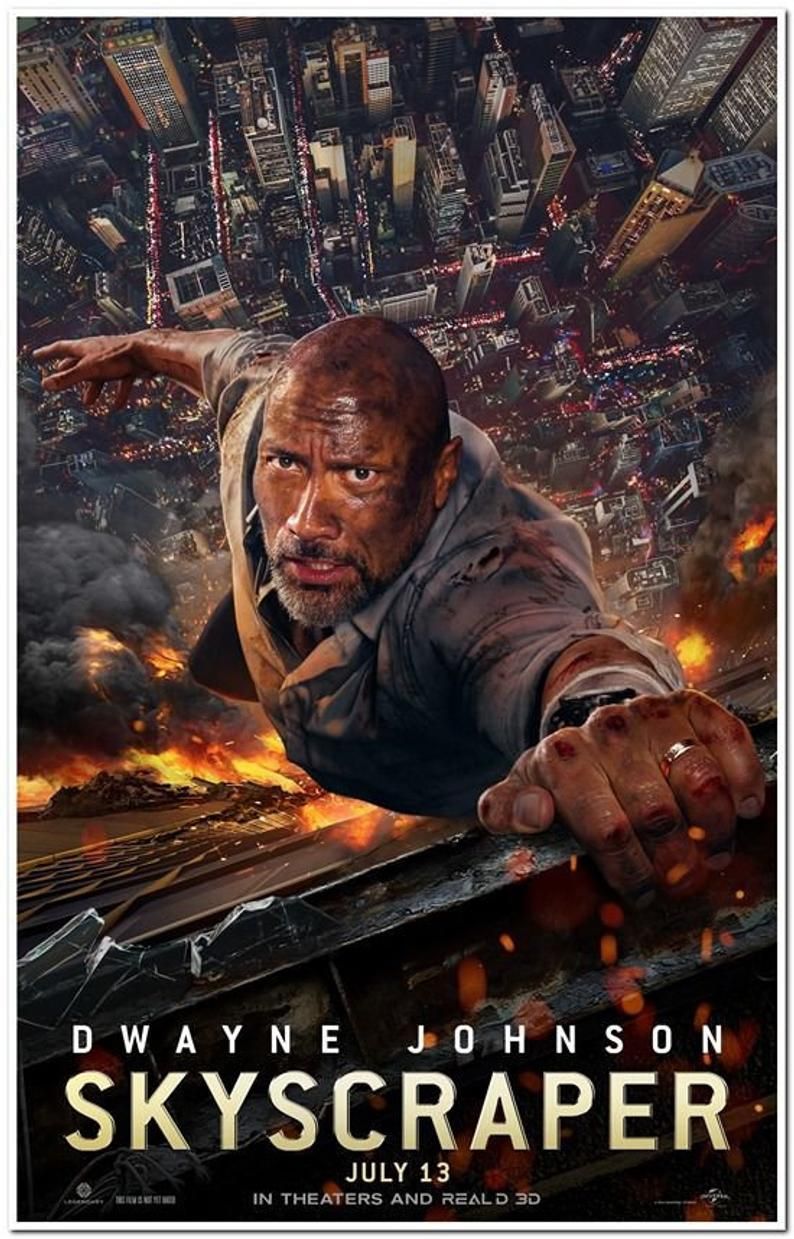 Skyscraper is a film that didn’t get a ton of hype after it was released. It just seemed to be forgotten by the wayside right away. Still, the trailers looked like fun and I would say that the movie delivers on the premise. It may not be doing anything super original but it’s what I would call a very safe action film. You know what you’re going to get. There aren’t any big twists and turns here, just a lot of big action stunts and some fight scenes. You can’t go wrong with this title and any action fan will have a good time here.

The movie starts off with Will taking a big injury which forces him to retire from the hostage squad. Fortunately he has a good gig as a security consultant now and was even invited over to check on the largest building in the world. His wife Sarah and their two kids are allowed to live in the building in the meantime as it’s otherwise empty for the moment. It’s all looking good until a bunch of terrorists light the building on fire and race to the top. They want to grab some kind of device that Zhao has, so the CEO locks himself in the penthouse suite. Will has 3 objectives now, he needs to rescue his family, stop the terrorists, and recover the device. If he is unsuccessful then the world could be in grave danger.

To try and give the villains a fighting chance for a change, Will lost his leg a while back so he has to use a prosthetic in order to move around normally. While the intent may have been to nerf his abilities a bit, I wouldn’t say that the film did a great job here since it doesn’t really seem to slow him down at all. If anything it comes in handy for things like stopping doors from closing or being used as a blunt object. Suffice to say, there are no fighters here who can take Will on. At best they can buy some time for themselves by taking hostages as otherwise Will would just take them out in an instant.

Will’s a solid main character. He’s your classic family man just trying to do a good job and keep it moving. The guy’s previous history of combat experience is comically long which I think the film was having some fun with as the detective reads off his profile. I can definitely see how you could do more sequels to this film if you really wanted to since Will is a jack of all trades here. Regardless, there’s nothing bad to say about him.

Will’s wife Sarah also does well when it counts. She is able to use some self defense against one of the villains when he attacks and she is able to generally take control of the situation rather well. Knowing the basics of combat really goes a long way. The two kids mainly just get in the way. It’s mostly unavoidable I suppose since they’re just kids but they won’t be winning any awards here. Without them the adventure would have been a lot easier for the heroes.

Now as the film goes on we also get to see the outside world reacting to this a bit including Inspector Wu. He does his best to get a handle on things but he is really ineffective here. It doesn’t help that his sidekick is super determined to prove that this was an inside job despite all evidence to the contrary. I thought she was incredibly unreasonable the whole time. In other movies there are instances where the skeptic is reasonable but this isn’t one of them. For example, you know all the classic films where a character is stabbed so they immediately say that they can’t be guilty since no person would stab himself?

I always call foul on that because a good villain would absolutely do that. This film though makes that more unreasonable, you have Will’s family being held hostage and the guy is jumping across buildings and performing all kinds of big acrobatic stunts. There is also a lot of visible evidence that people have entered the facility. It just seems like a reach to keep pinning this on Will and Wu takes some blame for just allowing it to happen and not saying much.

The film’s villains are more on the forgettable side though. First up we have Ben who is the most petty one of the group. He whines a lot about how the world is unfair as his justification for what he is doing and lets just say that I wasn’t shedding any tears over here. The main villain is Botha and at least he’s tough. There’s just not much to say about him beyond the fact that his skills are quite impressive. At least he is actually able to give Will a fight which is always important. Then there’s his right hand woman Xia who is fairly tough and down to business.

The villains aren’t bad, they just don’t stand out. There isn’t much more to them beyond their desires for money and destruction. You won’t remember much about them by the time the film is over. In general that’s why this film will be known as more of a general action film. It follows all of the classic story beats and doesn’t make any mistakes with them but it’s also not trying to go beyond that.

The writing is good and the pacing is on point. The movie’s effects and backgrounds also just look good. I certainly wouldn’t want to be in a floor where the ground is transparent though. That just seems like a bad idea. I don’t care how strong the glass is, it feels like you would fall through at any moment and I just couldn’t get behind that. In general I’ve never seen the appeal of being super high up though. I’m absolutely satisfied being close to the ground.

Overall, Skyscraper is a pretty good film. I’m not going to say that it’s great or anything like that but it certainly does the job and doesn’t leave you shaking your head. It’s just taking a very safe approach which is a valid way to go about this. I’d like to see it try to take the next step in a sequel though. Then it can ideally really begin to show what it’s got. Still, you’ll have a good time here as you just enjoy the atmosphere.