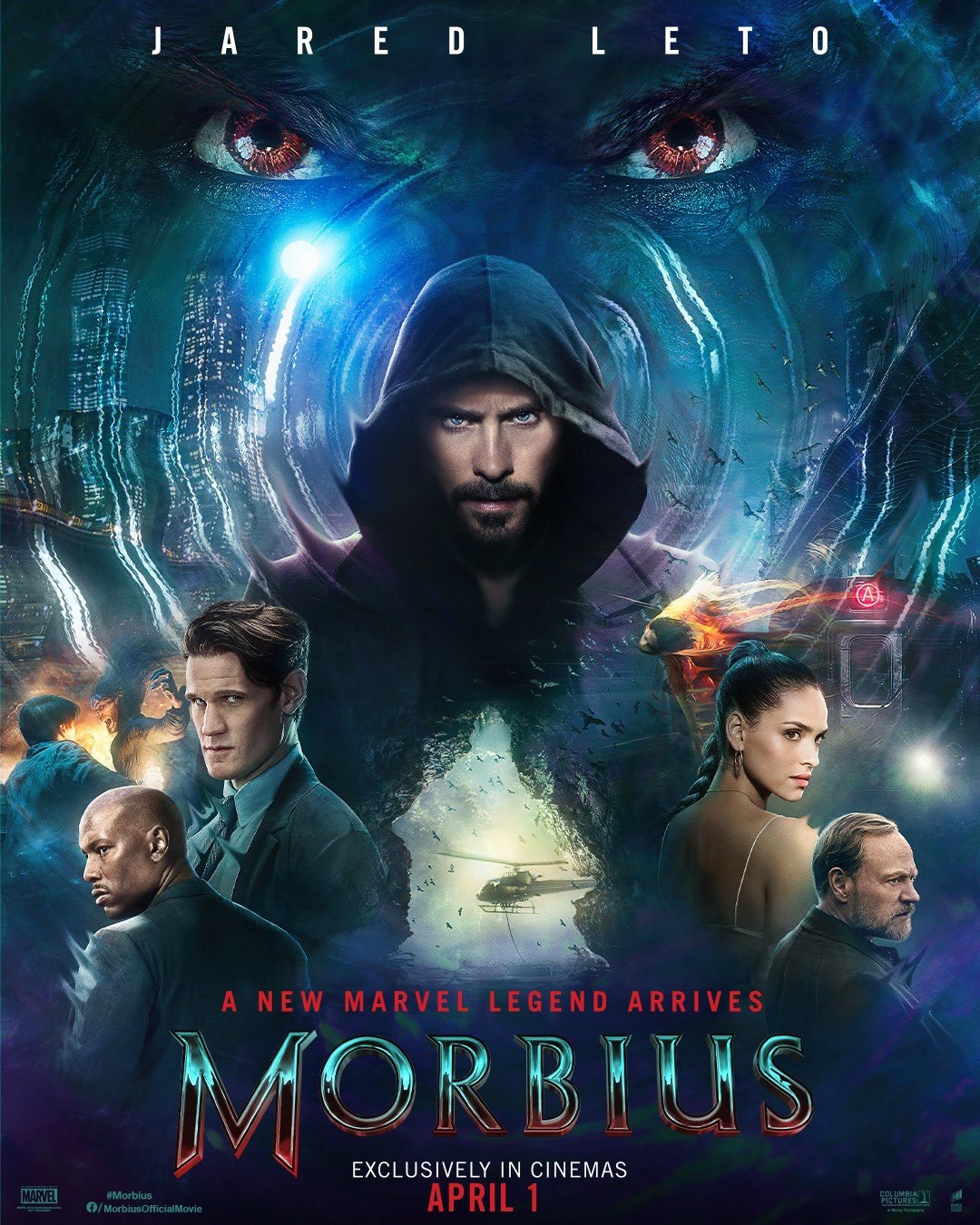 Morbius is one of those films that seemed doomed on arrival. Nobody really cared all that much about the character so why would a whole film about him do good? It’s also vampire themed which was tapped out decades ago. The only thing that put this film on the map were the memes and unfortunately it’s safe to say that the memes are better than the actual film. I wanted to hear someone yell “It’s morbin time!” in the film at least once. Ah well, at least the second after credits scene is hilarious and one of the funniest ones you’ll ever see. It’s a serious scene that is funnier than most of the humor based ones so the film has that going for it.

The movie starts by introducing us to Morbius and his friend Milo who were both born with a very rare blood disease. They can barely even walk and their bodies will continue to deteriorate until they die very young. They also have nonstop pain that hits them during every waking moment so their lives are quite tough. Morbius is determined to develop a cure though. Many years pass and Morbius is really close but the only solution appears to be involving bats and he will have to break a lot of laws to pull this off. Morbius succeeds but at a heavy cost. He is now a vampire and must drink blood in order to survive. Fake blood also won’t suffice for very long so soon he will need to feed on humans. Can Morbius resist the urge and find a cure for the cure or is he doomed? One thing’s for sure, he has no catchphrase to fall back on and save his life.

Lets talk about some of the stuff that doesn’t work here. Right off the bat you can bet that the blood stuff is a non starter here. You always have Morbius drinking blood and everything because that’s how he is able to exist. We don’t really see the blood but it’s nevertheless quite gross to see him drinking out of the bags and always gagging afterwards. Blood is just not a good drink to have at the ready and it’s a disadvantage of the vampire genre.

Then you also have this really awful song/dance sequence for Milo. Oh man it could have at least been semi decent if the song wasn’t so bad but it was one of the worst songs I’ve seen in a film in quite a while. The film couldn’t afford to have a scene like that because it was already skating on thin ice. I also just didn’t like Milo in this film. The guy gets too emotional too quickly and never thinks anything through rationally. He’s the kind of guy who seems okay for a minute there but very quickly you realize that any amount of power would quickly corrupt him. This guy is not hero material.

As for Morbius, the guy was running experiments on animals which is a really rough way to start his character arc. Experimenting on animals is never okay and so that’s an easy way to get me not to root for the character. He’s also just not my kind of lead for the most part as he lacks confidence and isn’t ready to just get in there and start landing hits. There are some brief moments where he gets real confidence and starts to be a real main character but those moments rarely last. At least based on the after credits scene he is finally back to being a confident leader so if they stick with that for any sequels then that will be an improvement.

The real standout character here was actually Al. So in a subplot that doesn’t go anywhere you have these two cops, Simon and Al. They are basically following Morbius around and trying to get to the bottom of the situation. What I liked about Al a lot was how he was able to quickly see through everyone’s lies. For one reason or another everyone he talked to would always lie to his face. So Al tends to give sarcastic remarks back to let them know that he knew they were lying and t was a nice dynamic. I was glad that he didn’t just play dumb there. This guy was quick on the uptake and I think giving him more scenes would have been nice.

Then you have the serious member Simon. He gets a quick chase scene with Morbius and holds him at gun point so this guy is very impressive. I really think the cops had a solid dynamic so it’s a shame that they couldn’t have done more. As it is, you could cut them out of the film and nothing would really change. They may give some set up for a sequel film but at the end of the day that doesn’t have much baring on this one.

The main heroine here is Martine and she’s a solid character. You just wish the film didn’t have to throw her into a romance right away. It doesn’t add anything to the film and the romance is just so weak. You don’t see why this started at all because they had a good working relationship going and you don’t want to wreck that by having both characters start getting emotional. It’s always best to keep it professional and that would have been a good idea. At least this way Morbius has an extra loyal ally at all times. Martine does well in staying strong under pressure.

Finally you have Emil who was the mentor type figure in the film which means that the death flags around him were absolutely massive. It’s very rare for the character to not get absolutely wrecked in a film like this. At least he talks tough and seems to be in the know. There’s not a whole lot he could have really done differently here.

One positive thing I can say about the film is that the effects are really good. Personally I liked the energy trails that Morbius would leave behind him during fights. The action scenes really hold up quite well. Morbius is also surprisingly powerful so he would definitely be able to hold his own against other Marvel heroes. His only weakness would be the time limit without drinking blood so he’ll need to find a fix for that. So at least the movie does have a little glimmer of hope there.

The sequel just needs to focus more on the action and less on the vampire elements. It also needs a fresh villain here, someone with a different power set so you can have more imaginative battles. I would have my hopes quite low for a sequel but I am sure that you can still pull it off with the proper writers and a good story. You don’t even need to rely on guest stars although they certainly would not hurt.

Also, one of the main conflicts here felt a little forced in how it happens. It reminded me a lot of the Amazing Spider-Man 2. So keep in mind that with this condition you are constantly in a lot of pain and so if there’s a way to end that pain then you’re most likely going to take it. I felt like Morbius had 0 empathy at this point and handled the situation in the worst way possible. At least offer some hope about a real cure coming soon but otherwise it does appear to everyone like Morbius was thinking “I got mine!” and leaving it at that.

It doesn’t excuse the villain from going crazy immediately but you can definitely see how it happened. The whole situation may not have been avoidable but it’s hard to say and would definitely have gone differently at the very least otherwise. It’s not that hard to have at least been a little tactful but of course that’s not Morbius’ strength.

The film doesn’t really have many fun scenes either. Like you’re never laughing except for after the credits and most of the film is just rather dreary. I would say the premise was fine but the execution was just bad. Still, if you do watch the film then stick around for the after credits scenes. I actually liked both of them which is rare since when you have two, usually one of them will be sub par as a result. Fortunately that was not the case this time.

Overall, Morbius is basically as bad as everyone said it was. The film just didn’t even feel like it was trying. The vampire stuff is pretty bad but even the normal scenes tend to be okay at best. I liked Morbius beating up some thugs and stealing their base but for every scene like that you have 5 lab scenes of him either drinking blood or getting hit with needles. The movie needed a completely different approach. Ironically the memes actually laid the groundwork for this so the sequel should embrace them and then the film could be good. Perhaps it would feel a bit like pandering but if executed right then we’d really be in business.