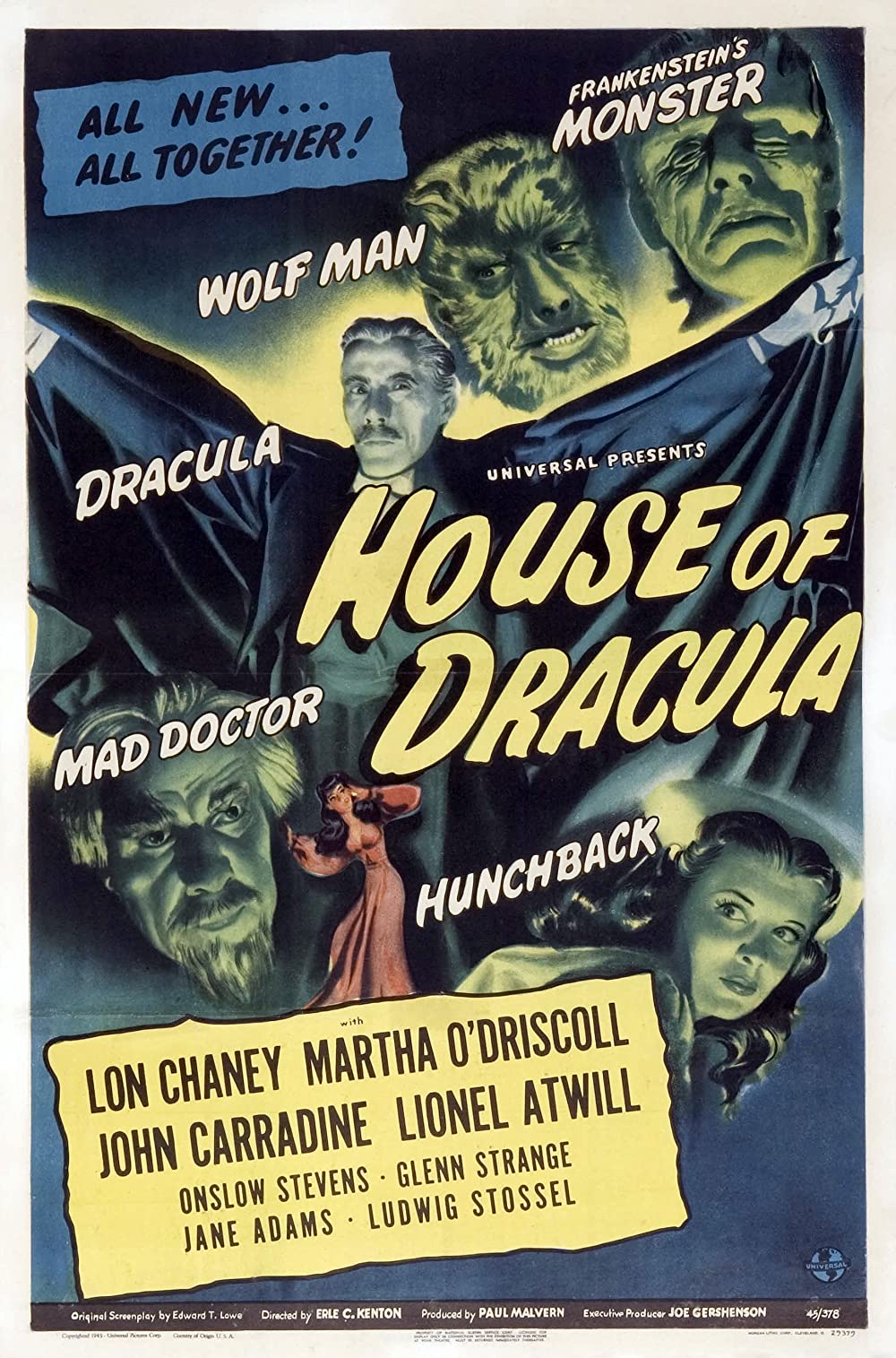 We are now entering the climax of the Universal monster movies. This one is definitely more of a standard experience as it doesn’t really do a lot with the premise but at least it’s fun to see all of the characters together. It would be nice if they all could really interact and have a big fight though. It feels like the film always finds some kind of excuse to keep these guys separate for the most part and I feel like that’s odd. People get excited for crossovers for…the actual crossover after all. So we want to see these guys mix it up.

So the movie starts with Dracula showing up to the well respected Dr. Franz asking him for a cure to being a vampire. The Doctor is ready to help but is Dracula on the level or is this some kind of scheme? Larry Talbot shows up shortly afterwards looking for a cure to being a Werewolf and the Doctor is eager to help him as well. Unfortunately he is rather busy so it’ll be tough to help them. Talbot doesn’t want to wait and jumps off a cliff but there he finds Frankenstein’s monster. During this chaos, Dracula makes his move and kidnaps Milizia. Can this monster be saved and will Talbot finally have his peace?

There is one plot that is very satisfying here at least and that is that Talbot finally gets some peace. After all these years of constantly being on the run or forced to turn into the Werewolf, it was nice that his plot had a satisfying conclusion. He was always the best part of this shared universe and so it was important that he got a good ending here. I don’t think this movie would have been as good otherwise.

It’s always fun to see him here and Talbot certainly aged quite a bit since the first films so you can really see how he was dealing with this curse for a long time. The other characters aren’t quite able to match him in terms of being as intense or interesting. First off we have Dracula but he doesn’t look very good here. He mainly relies on cheap tricks and deception in order to get ahead but his weakness to the sun is still quite massive. There’s one scene where he looks real awful because he’s running from the doctor so that he can get to his coffin. He goes in and locks the door. Well….the doctor just walks in and opens it so he dies instantly to the Sun.

I know time was of the essence but that’s just a lousy way to go. Meanwhile Frankenstein’s monster shows up to just be a mindless monster that is quickly dispatched. He has almost nothing to do with the actual story at all. He’s basically just here for the crossover so they awaken him just to take him out again. It’s all so brief that it’s almost funny but I don’t think any Frankenstein fans will be super satisfied with his portrayal here. It could have been way better is one way to put it at least.

As for the Doctor, well the power gets to him and he loses control so he gets no points for having any kind of strength of will. It’s good that he’s super smart and able to pull off some cures but he’s probably not the guy that you want on your side. If anything he was going to easily fall for Dracula’s tricks if the girl hadn’t given him a heads up. There’s also an inspector who appears briefly as always but he doesn’t get much to do. In effect this film is like a speed run through the usual Universal monster film template only with a few extra monsters.

The writing is decent at least, it’s always fun to see the characters having a polite conversation the whole time. The cast is small but I’d say they were mostly decent even if they weren’t too memorable. Seeing Talbot use a gun near the end was also fun since he’s more of a hand to hand guy usually with the Werewolf skills. It would have certainly been better if the movie embraced the crossover factor more but in the end I’d say this was a good movie. Maybe not “Very good” the way that it should have been but I could watch this one again.

The movie is short so it doesn’t drag on and meanwhile the pacing is on point. We don’t get too much of Dracula running around and causing trouble which is good since he’s usually the one who could make things a little dicey. If you’ve seen the rest of the Universal movies then you should watch this one. It’s not going to change your life but even if you’re just watching it for Talbot, it’s a nice way to end things off.

Overall, The House of Dracula forgot that it was a big crossover film and kept the plots a bit separate. Not completely separate like in the last one but I’d still like a modern remake to go all in with the premise. There’s really a lot you can do with all of these monsters meeting up and having it out. Well, this movie plays things by the books so if you want a low key Universal monster movie then this is a fun one to check out. Give it a spin and feel nostalgic as you know that you’ve arrived at the end of the journey. A small part of me will miss these titles or at least I’ll miss Talbot with all of his fun adventures.