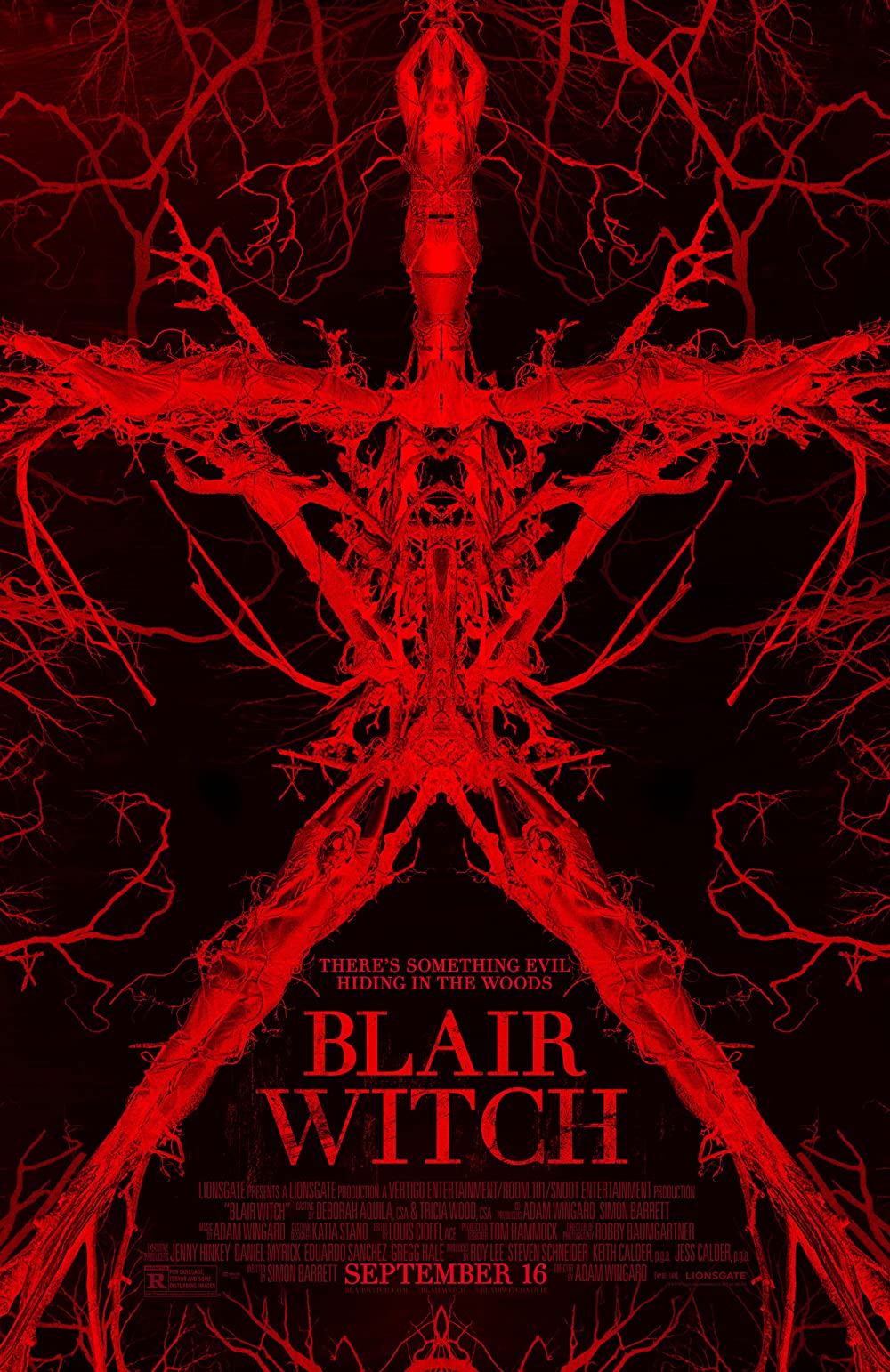 It’s time for the return of the Blair Witch! The first film was fairly bad, I wouldn’t put it in the same level as a slasher or anything but the shaky cam wasn’t doing it for me and the characters were annoying. This one is fairly similar to the point where you could almost call it the same movie. It’s continuing the story at least so that’s a start but the characters are still super annoying and there is at least one extra mistake here that I thought was crazy.

The movie starts off with James deciding to go to the Blair Witch’s domain to try and find his sister Heather. She’s the one who got bumped off back in the first film but he figures there is still a chance that she is around based on a very low pixel Youtube video that came up. He gets his friend Peter and Peter’s girlfriend to come along along with Lisa from school. They track down the pair who uploaded the Youtube video and they agree to help but only if they can come along. James reluctantly allows this to Lane takes them straight to where they took the video. From there things start to get dicey though as mysterious dolls appear and there seems to be no way to escape. Have James and friends already been taken out by the Blair Witch??

As always there is a lot of shaky cam here since the group can’t get their act together when they start running in the climax. Otherwise they have a lot of angles this time so things keep switching up but I’ll always prefer a real camera to the hand-camera style. It’s a little harder to really focus like this and it’s like the screen is always moving. Personally I think this is never the way to go and is probably the worst camera technique. Even if you want people to think that this actually happened, it doesn’t work. In fact, it works even less than the original because like I said, they’re switching devices constantly.

So when people found the tapes….they managed to find every single tape? They even got the drone tape to get that footage. I mean by this point I don’t think they’re expecting people to think it’s real so it may just be for tradition but I don’t think this was a good idea. Just admit that it’s fake from the start and lets use that as the baseline. Either way the film wouldn’t be going very far without better characters though.

The only reasonable one throughout is probably James. He is at least trying to save his sister and has good motives even if the plan is probably not a good idea. It’s not until we’re late in the game where it feels like he is weakening a lot like running off because he hears voices. It’s nice to assume that he is mind controlled because otherwise he just looks awful in this moment. You don’t just run off like that.

Then we have Peter who was also good here. He was against Talia and Lane joining the group and I agreed with him on that. Nothing good could come from having those two join the party. You’re allowing strangers who are quite shady to join the party just like that? No, I don’t think that was a good idea at all. Look, you’re already going to bat against possible supernatural forces but now you’re sleeping alongside two strangers? Anything weird that happens could now be them instead of the Blair Witch.

You also have to stay on guard all night in case they try anything or turn out to be psychos. Surprisingly the characters don’t take any extra precautions or anything like that which was a little surprising but it was still a bad move. I had a hard time getting past that decision. Sure, it’s good that they can show you the location of where they got the picture but it’s not worth all of the added danger here.

Ashley does her best throughout this as well but she definitely has it really rough the whole time. I would argue that the film is harder on her than anyone else because she gets a big cut at one point and then this gets worse and worse as there are organisms inside of her and it’s all really painful. It’s also rather gross and violent so they could have cut that plot out completely. Also, why did they take their shoes off to go into the river? That seemed like a really bad idea to me. Forget about the sharks but even bacteria and anything else that could be in the water is probably not a good idea to mess with. Shoes can’t stop everything but it at least offers you a little extra protection and I’ll take what I can get.

As for Lisa, she started off on the wrong foot from the start when Peter nicely asked if she wouldn’t use the footage for her documentary since it was very personal and traumatic but she said no because she needed the film. I knew at that point that this would be her priority and she did stay quite close to the camera the whole time. She wasn’t as unreasonable as the heroine in the first film but she didn’t do the group any favors in terms of morale here. Lisa did last a while in not looking back at least but at the end made a rookie move. I don’t get why you’d look back at that point in the game.

Talia and Lane are just annoying the whole time. They’re unreasonable and cause a ton of trouble just like I said they would. Seriously they hold the main group back so much and without them things would have been way easier. Of course it’s still tragic as you know things won’t go well for them but it would have been nice if they didn’t have to make it so easy on the Blair Witch. At least be good team players or something right?

The movie is more of an atmospheric horror for the most part so it doesn’t get too violent aside from Ashley’s cut. That said, we do get a bit more action than in the first one. One character completely cracks and decides to help the Blair Witch so we get a little scuffle there. Then you also have the Blair Witch herself running around. So personally I think she’s an alien at this point. We get a quick shot of her as she runs around and she looks like a classic alien type design. It’s a very short moment of course but that’s my first thought.

Then later on she seemed to have summoned a UFO. It’s all pretty crazy and intentionally vague but I’m glad the film gave us a little more to chew on at least. It would just be nice if the humans could fight back a little more at least. Not much they can do about the loops and reality warping but once they’re in the house I’d like to see a little more fight out of them. Again, it would help if we had a standard camera instead of having to watch them spin around the whole time. There’s a lot of yelling and panicking but not a lot of strategy. It’s a tense situation of course but it doesn’t make for a lot of entertainment.

Overall, Blair Witch is a very repetitive film. You really feel like it’s the first movie all over again right down to the characters and setting. The climax also plays out very similarly with a few different changes thrown in there but the same result. You can do a lot better with horror movies and this one still doesn’t feel like it has much of a point, not yet at least. If they make another Blair Witch film, it’s time to go with a traditional camera this time around. Also, lets get a better character cast this time.