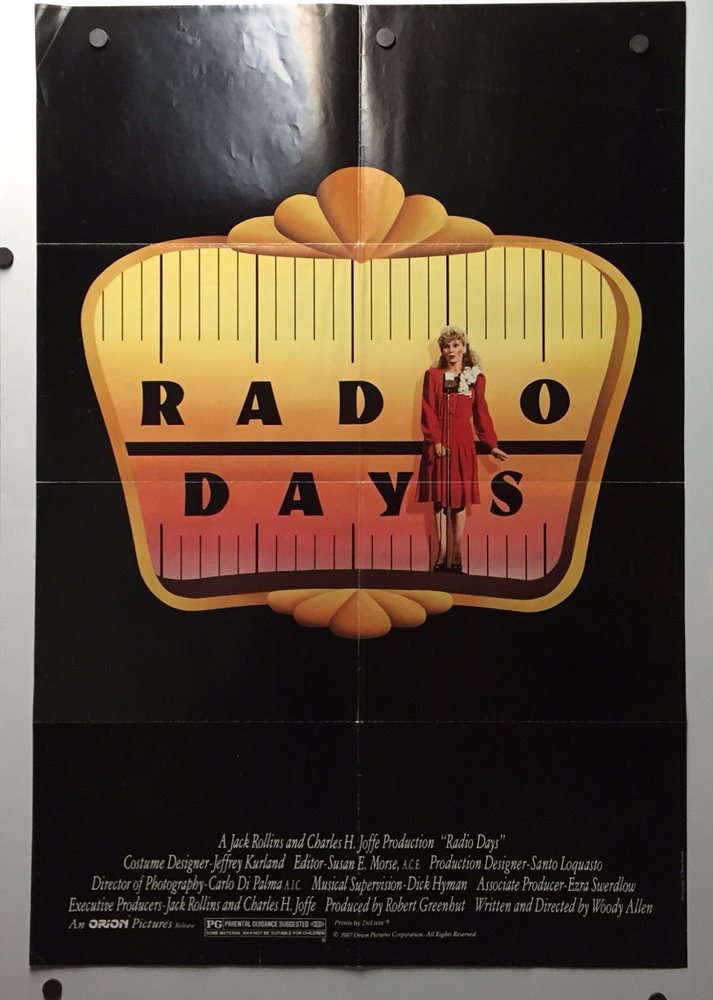 Radio Days is definitely a film that suffers from just not being very interesting. It’s all about the radio and a bunch of characters who listen to it but the characters aren’t all that good and the narrator just ends up being annoying the whole time. The film ends up dragging a bit as a result. Now I’m not saying that the movie is awful or anything as it’s weak but not terrible. It doesn’t make any huge mistakes, it just never really gets good.

So the film follows a kid named Joe as he listens to the radio and just gets to live life a lot. He is a big fan of the Masked Avenger cartoon that would play over the radio. As the years go by he gets to experience war through the radio as well as songs and just about every program that is there. He feels like these times were a lot of fun, they were the simple days where everything just sort of popped out at you. There really isn’t much of a focus to the movie beyond that. I suppose as a subplot you also had Sally trying to work on her enunciation so that she can be a big radio star as well. Ultimately she does well for herself and even gets a lot of street smarts so the execs can’t fool around with her.

That’s probably what the film needed more of, a steady plot. The slice of life with no purpose only works when the writing is exceptional and the characters are great but I couldn’t say that here. Joe is your average kid in many ways so there isn’t anything really interesting about him. His family certainly have a lot of strict traditions like not playing music on loud during the Sabbath and all but the father of the household cracks real quick once he goes to meet the neighbors. So much for his conviction there.

I also think he could have let Joe know that he was a cab driver. That’s not a crazy profession by any stretch so when he was being secretive I thought it was going to be something really embarrassing. I suppose he just had a lot of pride. Then Sally was decent enough once she got wise to all the scams around her. I thought the movie missed an easy lay-up by not having everyone get locked out on the roof though. That would have been a fun tribute to an earlier scene.

The Masked Avenger serial sounded fun at least. The concept sounded fun and superheroes are always in season so who wouldn’t enjoy that right? I would have liked to have focused on that a bit more since it would have been more interesting. You’ll just struggle about things to talk about here because all of the stories are so scattered and short that there is no focus. In general I do think stories need to have a strong focus because without them they will just get lost and you don’t want that.

What this film could have done to improve things would have been to have had Joe really have to deal with some challenges during the radio days. Give us a concrete plot like he’s earning money to buy a Masked Avenger figure and the whole film is about that as the radio plays in the background. You could probably tone down the narration a bit so we can get the plot rolling more. Good narration can absolutely enhance a film but in this one it just felt like the movie was stalling for time.

It just wasn’t very interesting much like the rest of the film. I didn’t grow up with the radio so any sentimental value that could have boosted the film with that didn’t work for me. Instead I was just waiting for the film to really get rolling. If nothing else at least it is always fun to see how the city looked back then. What has changed over the years and what hasn’t. I was never one to go outside on New Year’s Eve at midnight to watch things happen live, I prefer using the TV but it is fun to walk around in the morning and see how empty everything is.

Overall, Radio Days was a swing and a miss for me. While the lack of a plot/focus did keep the film from exposing the bad writing too much (Because what we got usually felt a little suspect) it also meant that the film had no real upside. It would be hard for me to describe the plot to someone because it was basically nonexistent. By the time you finish watching the film you feel like nothing has really happened at all. It’s like you were along for the ride but on a journey that didn’t actually have a destination. So that’s why even though the film doesn’t make any big mistakes, I would say to stay away from it. There just isn’t anything here for you and it’s also why this review is a bit on the shorter side because there’s only so much that you can say about it.