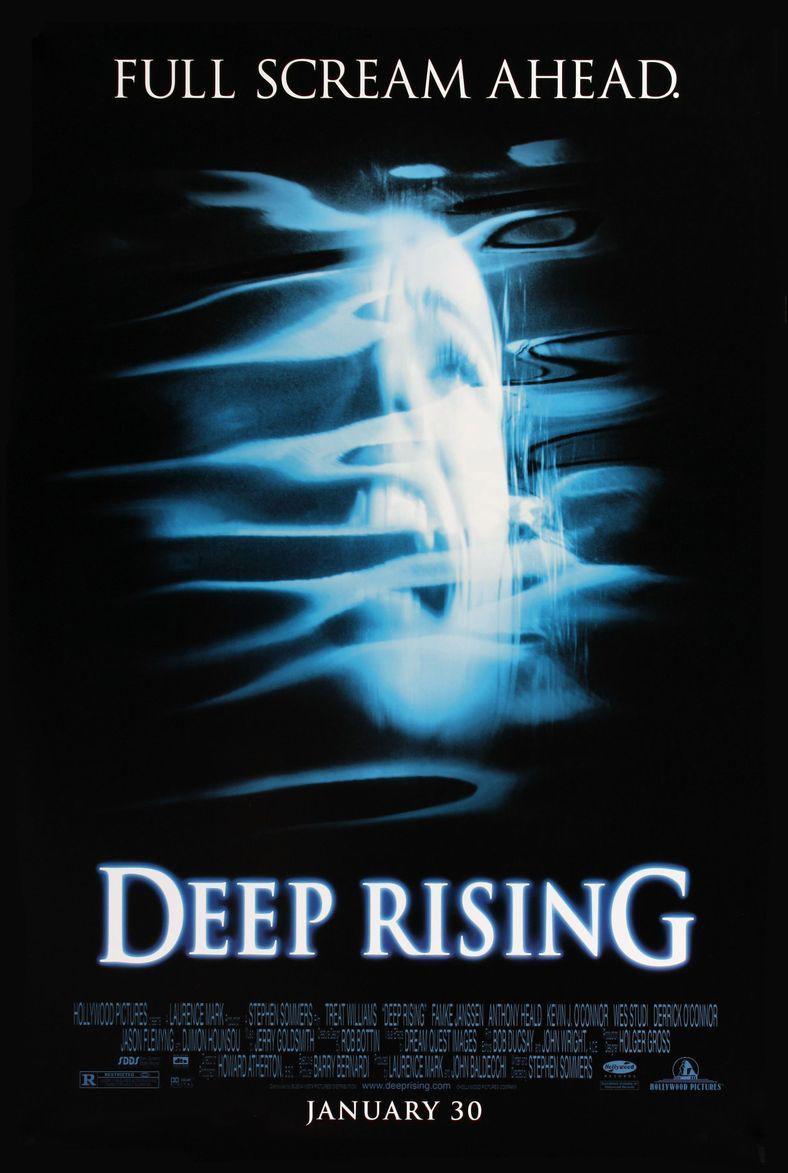 It’s time for a movie about survival with a little mystery thrown in for good measure. The movie’s got a fairly interesting premise although I wouldn’t say it makes the most of this and a fantastic ending but one that likely won’t be followed up on. So the movie’s in a rather interesting space there but it does have its moments. You’ll just walk away feeling like it left a lot of meat on the bone.

The movie starts off with John and his crew carrying a bunch of shady characters on their boat. John runs an operation where he will take you and your people/belongings to wherever you want. He won’t ask questions as long as he gets his money and so a lot of crooks love this. This particular group is really shady but it’s all going good until John’s partner Joey decides to make trouble for all of them. It’s only the first in what would soon be a whole lot of issues from that guy. Now all of the good will is lost and the heroes know too much so they’re taken aboard the cruise that the villains were going on. There’s just one problem…all of the passengers have vanished somehow. John needs to think of a way off this boat and fast or his group will follow suit.

The villains are led by Hanover as their version of John. This guy is after something within the ship and it’s clearly important because even the disappearance of everyone on the ship isn’t enough for him to turn back. Definitely a massive tactical error on his part to be honest. This is already such a strange situation that you shouldn’t want to get anywhere close. Of course with the ship they had been using already busted by this point, he was between a rock and a hard place.

What I appreciated about the film is how petty this guy is in addition to being evil. There is one moment later on in the film where he is given the option to go out painlessly or try to attack one of the heroes again. Naturally he goes with the latter and I haven’t seen a villain that determined in a while. It definitely shows what kind of man he was even to the bitter end. He was the most interesting villain by far though and had a good dynamic with the heroes.

I already mentioned that Joey causes a lot of trouble and he definitely does get real annoying in this movie. Why would he have to check on what the villains brought on the ship? The whole point of the agreement is that everything is kept secret so the drivers don’t have to know what’s going on. Joey put the whole crew in danger and without any payoff. Okay so the heroes know that the villains are carrying nukes. What are they going to do about it? Sometimes it’s best not to know. Of course the best option would be to not drive these guys in the first place but since they’re already doing that anyway, then it becomes an issue when Joey is putting them in a bad spot like this.

Joey also wastes a grenade later on during clutch time and doesn’t come up big at any points. He’s always got something to say and while this can result in some good lines once in a while, on the whole he just wasn’t very good and I wouldn’t say that he was a big success as the comic relief either. He’s a character that you just wanted out of the way as soon as possible that’s for sure.

Now John was a good main character though. He took a lot of big risks when needed in order to help his crew and stood up to the villains. It’s not like he’s a fighter and he was heavily outnumbered but John wasn’t going to let one of his guys get beaten to death. I appreciated his courage there and throughout the film he is good at improvising and turning losses into wins. He’s the kind of guy you could definitely look up to and a large reason why the film works well enough is directly because of him.

There is also Leila but she actually doesn’t get a lot to do from the main 3. She misses out on the full adventure because she has to stay on the other ship to work on repairs while everyone else goes aboard the cruiser. You can imagine that things don’t go great for her. I would go as far as to say that she’s pretty much a wasted character. I didn’t think that her role really made a difference in the story to the point where you could cut her out completely and nothing would really change. That’s never a good thing for a character.

By far the worst character here is Simon though. He’s one of those traitors who just wants a lot of money and is willing to destroy a ton of people in order to get his big pay day. The guy continues to get worse and worse as the film goes on. It’s pretty crazy just how awful this guy is. He lasts a long time too so once he is around you can expect him to betray the heroes over and over again. If there is a way for him to make the adventure harder then that is what he’ll do.

Meanwhile you also have a thief named Trillian running around the ship. She’s an interesting character. I tend to like the classic thief types. She has some skills but ultimately picked off a bit more than she could chew with this cruise. They have an impressive amount of security measures in place and it’s clear that this is the kind of boat you would be on if you want to be safe. You know..not counting the monsters but that’s not exactly the cruise’s fault. Trillian helps out a lot during the battles and knows how to use a gun so I appreciated that. She contributes a ton in getting the heroes out of a bad situation.

In general the movie had some good humor at times and the pacing was good. I liked the mystery and intrigue of how everyone vanished. Of course you know it involves a monster if you’ve seen the trailers or read the synopsis but if you went in blind then that would really be a compelling angle to be wondering about. The monster itself doesn’t appear for a while but once it does, it actually does get a good amount of screen time. This isn’t one of those films trying to hide the monster the whole time, when it shows up its ready for a lot of action and to claim some big wins.

It’s not the most impressive monster design but either way it’s not a creature you would want to fight in the ocean. That would put you in a bad spot because it’s so strong. It would be nice if it was fully bullet proof though. I feel like making the eyes vulnerable takes away from the giant monster experience a bit. I also would have liked the film to play around with the empty cruise a bit more. Have the characters wonder more about what happened here and slowly get picked off. That was some of the best scenes in the film so stretching it out a bit longer before they found survivors would have been fun.

The movie can get a little violent at times. This creature isn’t holding back after all. I wouldn’t say that it ever gets into Alien territory or anything like that but there are definitely big kills in the film and the monster isn’t afraid to really make the humans suffer.

Overall, Deep Rising is a reasonable monster movie. More films should try this mystery dynamic as it has a lot of potential behind it. It’s just a shame that we’re not getting a sequel because the ending was perfect. I think it would have ended up leading up to a sequel that would have been even better than the original. I would have had really high hopes for that one and I think it would have absolutely paid off. Ah well, either way if you like films with a little creature action and survival themes then this is a good one to check out. It’s on the fence on if I would really recommend it to someone but you can tell more or less if this is your style of movie. Picture Alien but a bit lighter with more banter and a comic relief character at the ready and more of an escape option since they aren’t trapped in space.