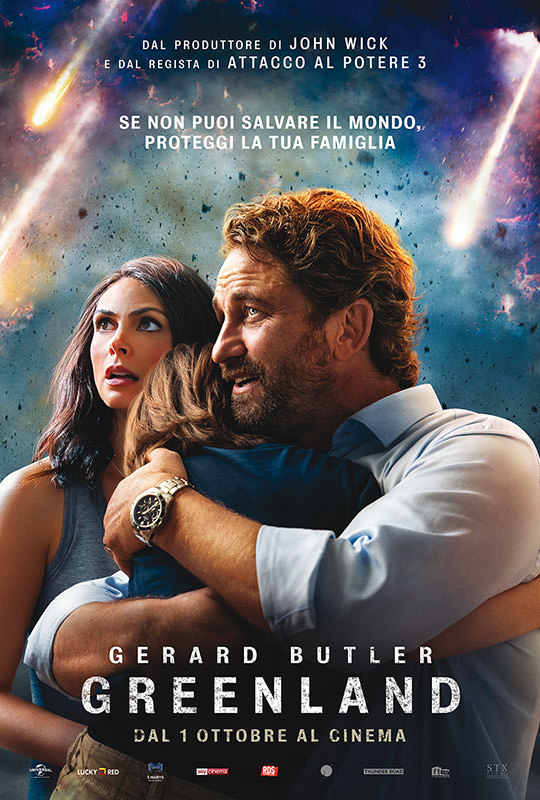 Greenland is one of those films where the end of the world is approaching so people take that opportunity to be as vicious and mean as possible. It feels like everywhere the heroes went they would be attacked by some crazy person. The film could have benefited from having more destruction scenes with big visuals but in the end I’d still say it was a solid film. It certainly shows how chaotic things would be no matter how many plans there were.

The movie starts off with John and Allison trying to have a normal party when John receives an alert that his family has been chosen to survive the comet that is going to destroy most of the planet. He has to grab his wife and kid and head to the evacuation shelter immediately. It’s a bit of an awkward situation though because the neighbors were not selected and the general mindset there is that they sort of just have to deal with it and accept their incoming destruction. Some of them try to be good sports about it but of course others aren’t so accepting. Still there isn’t really much that they can do but unfortunately the main family gets split up when getting ready to board the plane. There is also a rule that you can’t go on if you’re sick and as their son Nathan is diabetic, he is not allowed to fly. This leads to none of the family making it out and it’ll be very difficult to find each other again with the wifi out. Is this the end of their journey?

You can imagine how hard it is to find one person in a huge city when there is general chaos everywhere and no way to make electronic contact. The movie does a good job of showing the big contrast here compared to before the cellular towers went out. It also doesn’t help that just about everyone is going crazy. So to get into the shelter you have to have the wristband/QR code with your name on it. That’s the only way to get through so of course the people who aren’t chosen eagerly want this even if it means resorting to murder. Both John and Allison face different threats due to this.

Of course it’s all easier in hindsight but the instant they weren’t let on board they probably should have tossed out the wristbands. It only served to make them a target and nobody would ever know that they were selected if they had just gotten rid of them right away. It would have immediately put them in a really good spot at least compared to the rest of the people around. Still with how corrupt everyone is here, maybe they’d be attacked anyway. It’s a consistent theme that in times of distress people will always go crazy and turn into the villains. It’s unfortunate but at this point that’s just how things tend to play out.

John does a good job in the present of not panicking and always having a plan. He made a rather massive mistake in the past prior to the film starting though which is why things are so tense between him and his wife. I can’t say that he ever gets past this even if he does as well as he can in the present. He has to fight someone who wants to steal his ID and keeps moving forward in the film even as more and more challenges keep accumulating. It’s important to stay strong and just keep fighting in a situation like because once you lose hope then it’s all over.

Meanwhile Allison is fighting hard on her part as well. She had a really tough start with the guards not letting her son through and having to try and walk back home on her own. Additionally she needed to find insulin for Nathan or he wouldn’t be able to make it for the whole journey. Adding Nathan was basically a way to keep things from being a little on the easier side for Allison and John. Without him they would have had a lot of other options but when you have a sick kid at the ready then that’s something you have to account for.

Being attacked during the car ride was certainly something Allison couldn’t have predicted. I think her best bet would have been to run to the front and try to drive while the guy was outside though. Even if you just make it a few minutes at top speed it would be hard for him to catch up. You could also try backing into him but otherwise once he gets into the car you know you’re doomed so you need to do something really drastic.

While the film may hold back on the big explosions and all at times, we still get some fun visuals when they do strike. The sky certainly looks cool and the big chunks of meteor are definitely very imposing. You absolutely do not want to be in the way when they strike. The film has a good sense of danger about it as well and there is a high body count. You actually feel bad for the people inside the first plane because John slowing them down and trying to get out directly caused a bunch of them to die because the plane caught fire before it could go. I’m sure they wished they were in a different plane very quickly.

John’s step father appears later on in the film and he’s a fairly chill guy. I don’t agree with his idea to just stay at home and be destroyed though. Sure it’s probably easier than going on a big chase with only a small percentage chance at survival but at least you’re doing something. I feel like dying without a fight just sounds so much worse. Sure he could still live of course but worst case you could get trapped or it may take a while. In some cases the trip may not be worth it but in this case it seemed well worth the risks.

Overall, Greenland is a good film. It could have used a bit of a stronger cast and more destruction scenes in place of the humans being the villains all the time but it could still make for a good recommendation. If you want to see more of a low key disaster film then this is the one for you. The kid may annoy you at times with some of the trouble that he causes but it’s not like it’s intentional so I suppose we can cut him a little slack. There is apparently a sequel coming out soon and I hope they embrace a more supernatural angle like zombies appearing. I’m not even the biggest fan of zombies but otherwise focusing on the cleanup just doesn’t seem exciting enough. Maybe you could have another disaster happen right away, that would be intense.