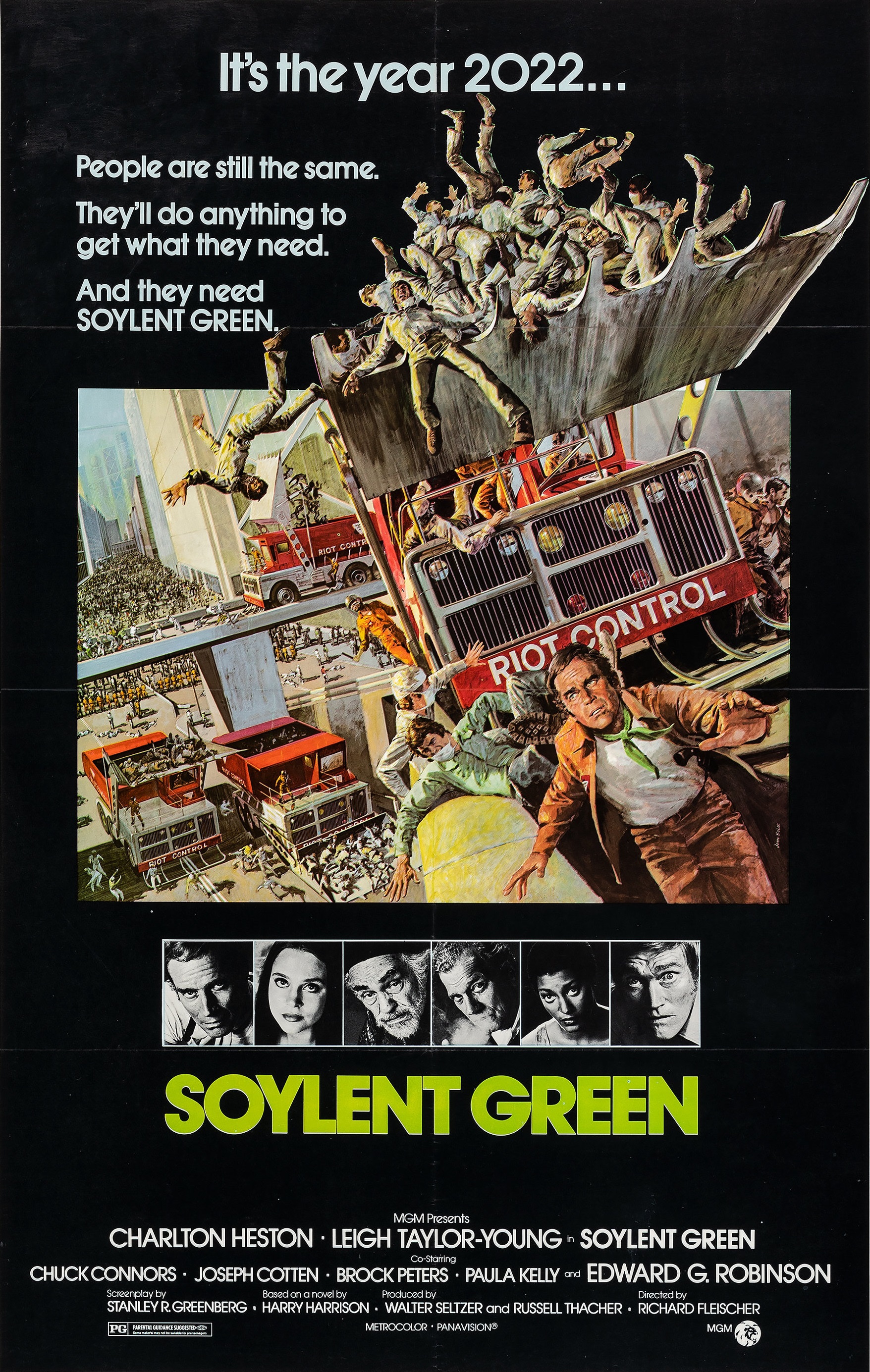 It’s time for a depressing run through the dystopian future that is Soylent Green. It’s pretty cool that it takes place in 2022 though. The world ended up getting quite ugly with too many people everywhere and the planet finally running out of resources. I like the concept and all but this is the kind of film that gets rather gritty quickly and is more focused on shocking you than delivering a great story half the time. I’d like to see another writer take a shot at this idea but of course you probably need to push the year up for any remake to 2040 or something like that.

So that’s the setting of the movie. There are just so many people nowadays that there aren’t enough houses and most live on the streets. There are hundreds of squatters in every building just trying to find a place to rest and even climbing up the stairs is a hassle with everyone sleeping there. Only if you’re super rich will you have a place to stay and actual food. Otherwise everyone just has Soylent Green to live off of which doesn’t even have much of a taste. No food has taste except for the ultra rich. The houses come with “Furniture” which is unfortunately what the women are called now and you can probably tell all that you need to from the term itself.

The world is as bad as it can be and the film focuses on Robert who is doing his best to live through it. He is a detective investigating a recent assassination. While it may have seemed routine at first, Robert feels like there is more to it than that. The guy who got bumped off was a top executive for Soylent and he seemingly went down without a fight which was odd. The bosses also don’t want him focusing on this case for too long which is another red flag. These are starting to add up which is another thing to watch out for. Can he survive long enough to find out what is going on?

Robert may be the main character but calling him a hero would be a stretch. The film makes clear that all of the heroes are gone at this point since there really isn’t room for heroics when everyone is just trying to survive. Robert steals whatever he can when doing routine inspections and is quite shameless about it. He abuses his power to do so and of course nobody can really talk back to him. It’s probably the biggest perk of the job since he gets to have real food and use actual water to take a shower. Those are luxuries people don’t get otherwise at this point.

He’s also quick to have an affair with one of the ladies and in general comes across as a flirt a lot of the time. It seems to be more a way of passing the time than something he is usually serious about though. He is well accustomed to the world at this point and can talk tough to anyone, even the villains so Robert is never run over. He fits in with the setting and atmosphere quite smoothly. I just never found him all that likable. He’s much preferable to a more timid main character who wouldn’t be able to hold his own here but that’s about it. I wouldn’t give him too many consolation prizes beyond that.

He has a friend named Sol who is even older and vividly remembers the world as it used to be. Adapting has been really tough for him although he tries his best. Unfortunately as the film goes on it becomes way too much for him. It would have been better if he could have stayed strong even if you understand the temptation. As a result of conditions being so tough, there is now an assisted suicide facility where you get one real meal and they play you sounds/music/videos of your choosing as the drugs go in and you quickly die. It’s a painless death that is made to be as comfortable as possible.

Assisted suicide is always a super controversial topic without any doubt. Some will be against it on the premise alone while others would support it on the basis that it can be useful in some circumstances. In a situation like this movie where people literally can’t eat and everyone is dying of overpopulation, you can easily see how it would pass. It’s always just a slippery slope because where do you draw the line? Well, I don’t think that’s something the world will have to worry about for a long time unless we do enter a dystopia like this. It’s definitely a very eerie scene precisely because of how clean and shiny the place looks. It appears so out of place in this dark world that the whole thing feels ominous and almost like a trap. It works effectively as a way to show you how dangerous the place is.

There is a pretty big twist at the end of the film that is also quite disturbing. I thought this twist was very effective and it also makes a whole lot of sense in universe. The world is suffering from a ton of problems but almost all of them stem from the fact that there are too many people on Earth. Their numbers exceeded the resources so you would need to find a way to take care of that. Unfortunately I can absolutely see the ending being something considered in the real world but at the same time I could also see war being a way to take care of the issue much sooner. Regardless it does gives you a lot to think about.

So on a story perspective I thought the film was very interesting the whole time. There was just so much going on. That said, it really could have dropped some elements. First off, the whole “furniture” element needs to be tossed out immediately. Not only is it just an awful concept from the start but it also sours the romance entirely. When Robert is having a fling with one of the ladies who seems to be really attracted to him, there is always the undertone that she is doing this for protection. She basically has no rights at this point so getting close to a detective with his amount of power would be tactically smart. She even says that she is frightened at several points and ultimately it’s difficult because there isn’t a lot that he can do in the long term. Then you see how this is an issue for lots of people and the film gets way too dark there.

The movie is clearly trying to do a lot of worldbuilding which is effectively does as Robert digs into the case but some elements just weren’t good. No matter how bad the world got in 2022, it just doesn’t seem like that would have happened. In general it’s hard to see how the rich haven’t all been taken out by this point either with how the system is set up but I can maybe believe that a bit more. The movie just should have focused more on the murder case and the twist at the end instead of the romance angle and how disturbing life at the top is.

Overall, Soylent Green is a film that does work really well in visualizing a terrifying dystopia. You would not want to live in that world and it is a really scary prospect. It just should have stuck more to that terrifying atmosphere and mystery elements instead of going more for shock value and throwing in some grit. if you remove the furniture concept the film immediately jumps up a bit. I’m not saying it would be great as the doom and gloom backdrop doesn’t make for a lot of fun visuals but it would still capture your attention all the way through. So while I enjoy the concept I wouldn’t be recommending this one.