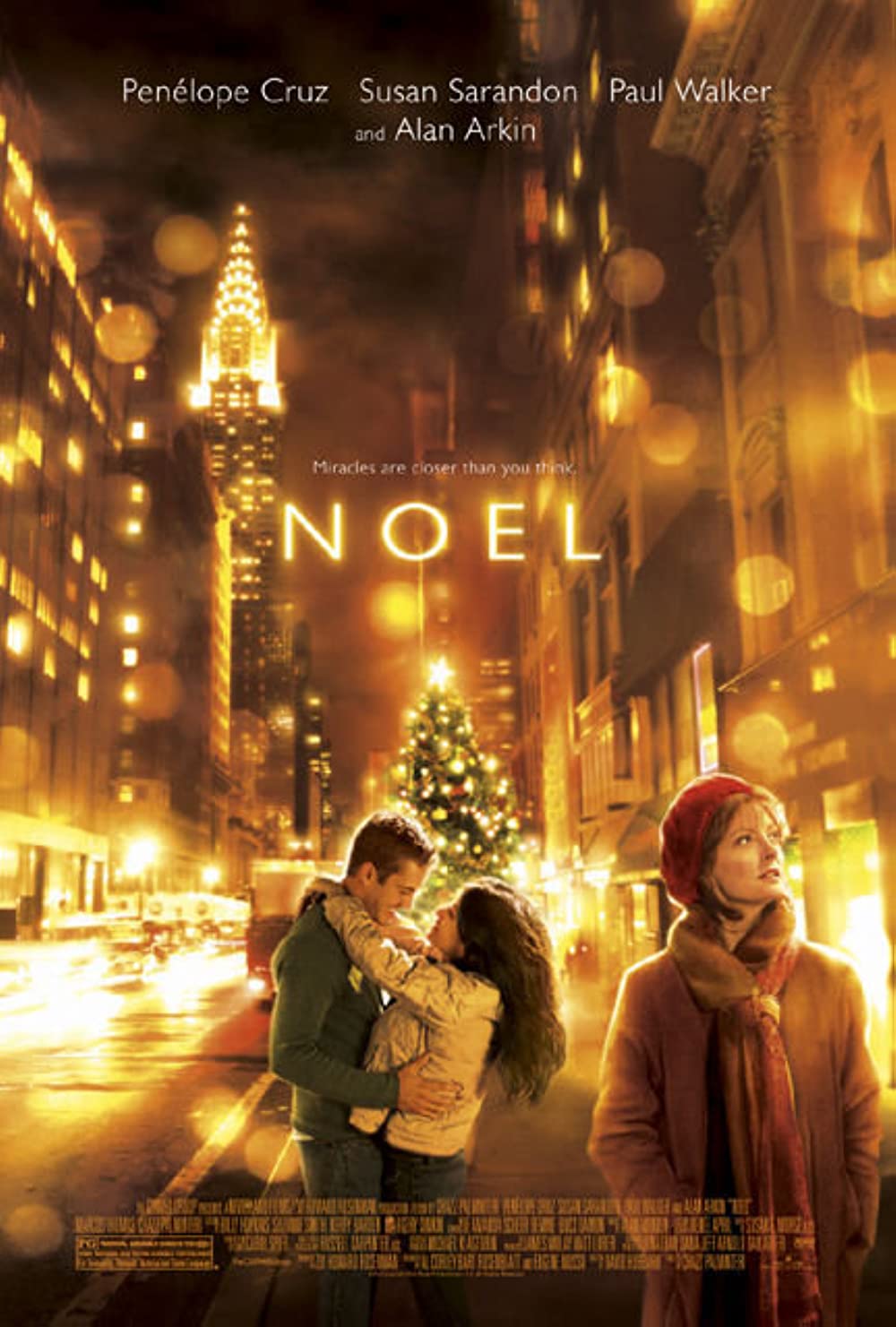 If we really have to count this as a Christmas film then Noel has got to be the worst one that I’ve seen. It starts out as a stinker right away and only gets worse. It reminds me a lot of the dialogue from The Room with how off beat everything is. The way the characters talk and act just seems off and the movie just feels really mean spirited by the end. It would help if I actually liked any of the characters but they’re all just really annoying.

In this movie we follow several different plotlines, some of which connect but for the most part they’re fairly separate so lets dive into them. First up is Rose and Charlie’s plot. Rose’s mother has advanced Alzeheimer’s and is barely hanging onto her life at this point. The pressure has really gotten to Rose and she decides to end it all but it prevented from doing so by a guy named Charlie who used to be a priest. He tries to convince her that she still has a lot to live for but she just isn’t sure. She’s tried to live again by crashing parties and going on dates but it all feels empty to her.

Rose has been using all of the most superficial ways to live again and they haven’t worked but when Charlie starts to talk in more supernatural avenues like talking to her mother somehow, Rose isn’t particularly thrilled. Then the doctor in charge of Rose’s mother also likes her so everything is happening really fast. I think Charlie could have handled the situation a whole lot better the whole time because the way he brought up talking to Rose’s mother as a spirit is not really a conversation starter. Things had been going well until then so if he used more tact than it would have worked. The doctor liking her at the end also felt super rushed the whole time.

Rose isn’t my kind of character either with how turning to romance was one of her default options. She also should have said no to the coworker coming to her place when she barely knows the guy. She really succumbed to peer pressure too quickly and deep down she knew this couldn’t work out. The age gap was too crazy so why even try to see how it’ll go? Of course it’s different for everyone but personally I think at max you can make a romance work if someone’s 10 years older than you and the odds will not be in your favor. Any more than that and you’re really going to be doomed if you ask me. But ideally you want within a few years for sure. This subplot was always really dull whenever it showed up.

Then we have Nina and Mike who are close to getting married but the main obstacle right now is Mike’s quick temper and excessive jealousy. He can’t stand to have anyone even look at Nina which makes it difficult for her to have normal friends even. He flies off at the handle all the time and even punches out one of her friends. Nina hopes that he will change but is starting to have doubts and is wondering if perhaps they should just not get together. She is about to have a kid though so the timing would not be great. Then Mike bumps into a crazy who believes that Mike is the reincarnation of his wife and is trying to stir up a lot of trouble.

In a way this plot is in two places so starting off with Nina, you can absolutely see why she has a lot of reservations. Mike is just too excessive and doesn’t show any sign of changing. If there was progress then that would be good but even when she sits him down to talk about this, all he can think about are the guys she mentions may look at her from time to time. He is completely zero’d in on this which is discouraging. Nina likes dressing up to look fancy, her job will require interacting with people and her co-workers. If Mike can’t handle this then this will always be a toxic relationship.

Then Mike probably has the worst plot of all here. So you figure if there is a crazy guy like this you just avoid him and make sure not to humor the guy. Mike is a cop as well so he can arrest the guy if he gets to be too much. Instead he actually invites the guy to his house and is basically attacked before the guy has a heart attack. I get that Mike wants to be a good guy but he just goes way too far like following him to the hospital and trying to give him closure by pretending to be the wife for a quick speech.

It wasn’t a satisfying resolution. I’m not saying Mike needs to be mean about it but you don’t invite someone like that to your apartment and you absolutely don’t need to go to the hospital and humor him. This plot drags on forever and Mike’s actions just don’t feel realistic at all. I felt bad for his partner who was bewildered by this the whole time too. The partner gets a ton of credit for having Mike’s back the whole time though and always keeping his guard up. He knew that something wasn’t right and didn’t abandon his partner.

Then there is Jules who had a great time celebrating Christmas as a teenager while in the hospital and his life has been hard since then so he is determined to have one more party. To get into the hospital he hires someone to break his hand but unfortunately there is no big party this time. The hospital is way too busy with everyone running around and he basically realizes that he’ll never have a happy Christmas again. It makes sense that the hospital would be way too busy with how many patients are running around. It’s the kind of thing you figure may have happened back in the day or in a more quiet area but not here. This plot felt the most random and doesn’t get much closure as he just realizes this was all for naught.

Noel has a very gritty vibe from the start and you can tell that it’s an indie type title. Not only does everything look dirty and shady the whole time but none of the characters are all that great. Most of them don’t even seem like good people that you would get along with if you ever met them. So without great characters to root for that just puts you in an even tougher spot right from the jump. Forget a lot of happy Christmas songs and fun scenes. The movie is always very serious and depressing all the way through.

The film even throws in a bunch of fanservice scenes during Nina and Mike’s plot and everyone seems to be having an affair and making love from time to time. Every character feels so desperate and the film doesn’t have enough of a main plot to actually hold its own so it has to resort to all of this. If the characters could have at least been really good then that would have helped things but that wasn’t the case here. I also mentioned how everyone just acts oddly and that’s embodied the most in Mike’s plot. I still can’t see that story playing out this way at all. Mike honestly looks very dumb with all the risks he was taking. If the guy had a knife or a gun then it would have all been game over.

Overall, At its core the film’s problem is that there are no good scenes. There’s never a moment in the film that will make you smile or think that the movie did something cool. It’s all dreary and depressing the whole time. You might come close to laughing sometimes at just how absurd the whole thing is but that’s not good enough to actually help the film out. It’s all so slow paced and everything drags on forever. This could have been a 40 minute film considering what was actually covered and at least then it would end quickly. Instead it just keeps on going and going. Jules is probably more sympathetic than most of the main characters and even then he should have just gone to just about any party in the city since there are hundreds going on. No reason to injure himself like that. It just showed that he was also a bit crazy to go this far with that. You have to be truly desperate to have someone break your hands to try and enjoy Christmas. Definitely skip this one and stay far away!