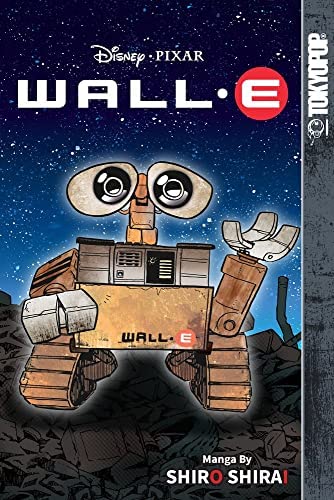 The Wall-E movie was fun and a bit different from your average flick with how the main character doesn’t really talk much. So it’s more of a visual title in the end. The manga decided to change things up by adding a narrator the whole time. I understand the move since you’re worried that readers will get bored or finish too quickly without anything to see but unfortunately the dialogue does tend to be rather cheesy. This isn’t going to beat the average adaption but it’s still not bad it’s just not as good as it could be.

Basically the story follows Wall-E who is a trash compactor robot that is very lonely. There isn’t anyone around anymore and he just wants a friend. Well one day he meets a robot named Eve and he figures they can be friends. It’s tough goings at first since she’s mostly emotionless but by the end they get to be good friends. Along the way they even end up helping out the human race who have all grown very fat over the years since they didn’t have to exercise at all. With Earth contaminated they all live aboard a spaceship and have everything they could ever want. It’s like a paradise but one that has gotten the humans really lazy and unable to contribute anything. I do have to say that this is mainly the humans fault though.

It’s an interesting look at what paradise can do to you and it’s an argument that the heroes have made in a few different titles whenever paradise is brought up. If life is too perfect then the idea is that people will stop trying to improve themselves and innovate because there won’t be any reason to do so. I would say the main issue with this idea is that it’s basically saying to stop trying to make things perfect because of a possible issue but one that shouldn’t even be relevant.

It’s actually impressive that humanity came up with this advanced ship and everything to avoid Earth being too poisonous all those years. I also liked that the manga didn’t make the humans look super corrupt or anything like that. I feel like half the time in these things the humans all end up being evil for no good reason. In this case it’s actually a robot trying to mess things up so that was appreciated. The captain actually stayed strong and did his best to try and help save the world.

In a way the only double edged part of this is that the human plot is way more interesting than the robot one. You just don’t care about Wall-E and Eve too much next to the captain and his crew. I know it’s an emotional tale with those two but because they can’t talk too much it does mean that there is only so much they can contribute to the story. You aren’t wondering what’s going to happen or what trials they will encounter. Instead you’re just waiting on the human parts where there is a lot of danger.

I will say that the artwork is decent though. It does a good job of capturing what was happening in the movie and the character designs are on point. It’s not a very action packed series so it’s not like the artist is being super tested here but it’s still a good showing. I was satisfied with how the manga looked and it makes for an easy read. You will definitely be knocking this one out very quickly.

It’s also just a very wholesome adventure so this is one you can recommend for all ages. Kids, teens, adults, everyone can have some fun here. The only downside is again that there just isn’t much danger for most of the adventure. There is a villain near the end with the robot but that threat goes by in the blink of an eye. I think adding in an Evil Wall-E would have been good or maybe giving the evil robot a super form so he could fight with that. It may be a bit outside of what the story was going for but it could still work really well.

I always remember thinking that Wall-E looked a whole lot like ROB which was pretty fun. If he had that stern personality as well I think that would have worked out well here. I would argue he is going more for friendship with Eve at first but just doesn’t know much about feelings and so that’s how it starts to turn into a bit of a romance but it doesn’t really work because they barely even know each other. It would be a very rushed romance in that sense and so it isn’t the strongest part of the film. I’d say they should have just cut that aspect out of the manga because it wasn’t really needed. Give Wall-E a good friend and the story works out well. 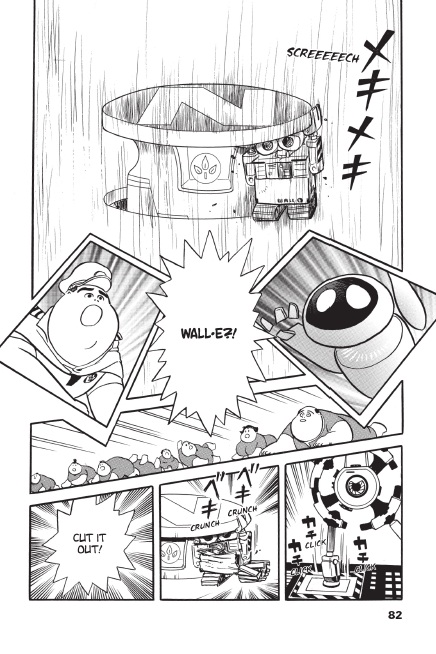 Overall, Wall-E is a good story but the manga doesn’t really add anything to it. You could probably have just as good a time watching the movie and maybe an even better time. This is like the cliffnotes version if you don’t have time to watch the movie but want to talk to people about the story. The narrator is also just really cheesy so he doesn’t help with things. He’s sort of trying to tell you how you’re supposed to feel about every scene but does so in a very heavy handed way. It’s still a decent story but one that may feel a tad boring at times.