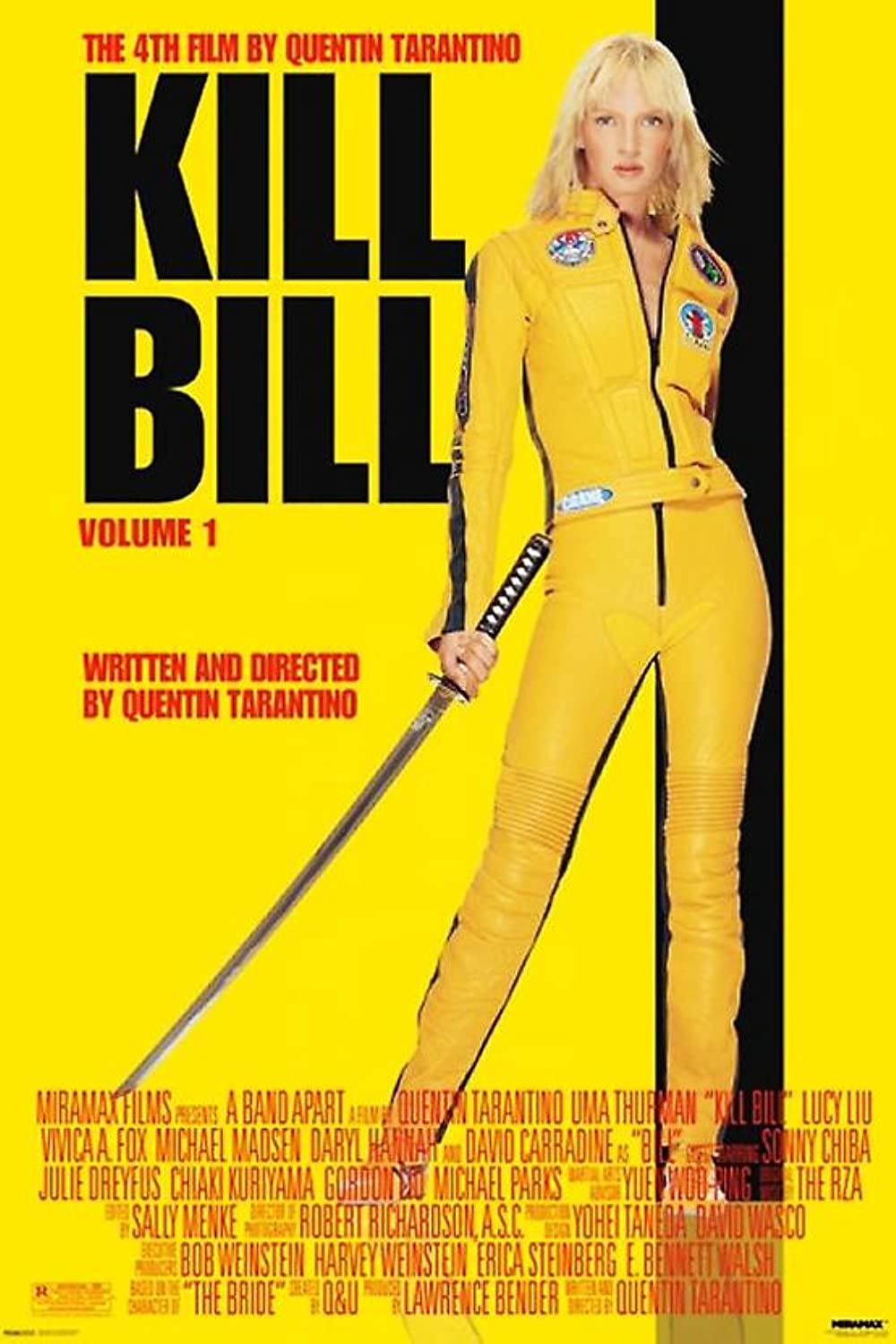 Kill Bill is definitely a movie that is absolutely legendary for being super violent and one of the ultimate revenge thrillers. When you hear the name you know that you’re in for something intense. It definitely doesn’t disappoint in there. I feel like there is a whole lot of things to like here and interesting ideas but that’s why it’s a shame that it had to be so violent. All of the elements are in here to make this a top tier title but it just doesn’t happen.

The movie starts with the Bride getting beaten down badly by Bill and his crew. She’s then shot and left for dead but ends up surviving. Bill’ right hand woman says they should finish her off but he says it would make them look weak so she’s allowed to live. Once the Bride is healed up she vanishes for a bit and then returns to bump them all off one at a time. She has a list and she’s checking it twice but will she be able to defeat the world’s strongest assassins?

We start things off really quickly in the present as the main heroine takes out Vernita. It was a really powerful way to kick things off because you don’t have much context at this point and just have her fighting this other professional while also trying to appear normal in front of Vernita’s kid. It made for a good dynamic and ultimately we already see why the Bride is the heroine here as she actually gives Vernita a chance to not die in front of her child but the villain doesn’t take her up on this. There will be no stopping the revenge tour this time. Bride intends to get everyone and it’s easy to see why considering the opening.

This fight was actually really good. There’s a lot of back and forth and it’s focused on really good choreography instead of trying to be super shocking. I liked the tone of the fight as well and how odd it felt the whole time with things going from 0 to 100 real fast. Unfortunately the movie peaked early here and was never quite able to match this.

See, we destroy all of the momentum right after this by going to the hospital and seeing the Bride’s recovery. The film decides to go extra dark as we learn she was taken advantage of numerous times while she was under and you have to ask yourself what this possibly adds to the story. If your answer was 0 then you are almost spot on except it should be a negative number since it hurts the story. It also makes one character look even worse in the sequel although I’ll get to that in the volume 2 review.

Sure it gives us a chance to see the Bride murder more people are violently as possible and you know they deserve it but that’s why the cycle of violence doesn’t help anybody. The more evil you make a villain the more you’re going to have the hero enact revenge in increasingly brutal fashion. It’s a cycle that just doesn’t end as a result and a film doesn’t need that. Just introduce us to the villains and lets get some good fights in.

Throughout the movie it’s a common theme that everyone has to die as violently and disturbingly as possible. Usually the fights with the top tiers tend to be not quite as violent since the battles are able to go all the way until the end and maybe the killing blow gets violent but that’s about it. It’s the minions and random civilians you have to watch out for as the heroes and villains really get to style on those fighters.

The choreography can be really good at times when it’s not being overshadowed by the violence though. I like that each character has a codename and it’s filmed like a big anime showdown at times. There is a wide range of music here as well so a lot of effort was put into the film. On a purely technical level the movie definitely holds its own really well and makes for a very solid experience there. It’s just everything in the middle that destroys these elements.

Take O-Ren’s backstory for example which is where the film has a whole lot of fun being super violent. It suddenly turns into an animated segment since you can get away with more there and they’re showing off the animation but you can’t help but feel again that they could have easily told the story without getting into the gory details. Just keep it moving and get us to the present for some big fights.

The Bride is a solid heroine at least. You are definitely rooting for her to win given everything that she’s gone through and she is a very efficient hunter. She’s not interested in hearing any excuses from her victims nor will she spare them in the end. She’s hear to murder every member and wants Bill to know that she’s coming. In this film you don’t yet know exactly why they went after her but you know that she needs her revenge and even the villains pretty much admit that it’s fair for her to try and get it. There is never any doubt on who the villains are here. Yeah Bride may not follow the superhero code, but she’s not a superhero. She’s just someone looking to get revenge.

Bride hasn’t quite lost her humanity yet either as seen when she tries to convince Vernita not to die in front of her kid. Bride does have some standards but the villains do not and considering how outnumbered she is, it’s not like she can afford to hold back much. Bill doesn’t actually appear much here but definitely has a presence. You know that he’s someone not to be messed with and presumably he can fight since he has a big sword. He may end up regretting sparing Bride considering all the damage she’s accomplished but you do get why he wouldn’t want to be known for finishing someone off while they’re asleep.

Vernita is an interesting villain and part of why the fight with Bride was so good is that they feel a bit like parallels. Vernita is out of the assassin game now and started a family. She had a happy ending to her character arc at least up to this point but in the end she has to fight a dark mirror of herself. I was glad that Bride didn’t accept any of her excuses either since the past actions aren’t something so easily waved away. Vernita put up a fight and at the end of the day that was the best she could do.

Then you have Gogo who isn’t one of the main villains on Bride’s list for revenge but she actually gets her own big boss fight and is definitely someone that can’t be overlooked. Basically she’s a psycho who loves her job. She may not be as powerful as the main villains but her weapon is fairly unique so it’s a bit harder to dodge. She gives Bride some trouble as a result but I wouldn’t say a whole lot. She makes for an imposing villain though.

Then you have O-Ren who is an excellent swordfighter and has a really good fight with Bride. In terms of overall ability I dare say that she was probably the most powerful in the whole series counting volume 2. The only way to beat her was with pure skill all the way through. O-Ren built up an empire and had a huge group through her own merits since that group wasn’t going to take a woman seriously as leader otherwise. Ultimately she just shouldn’t have messed with Bride.

The film also has a great cliffhanger ending to lead into the sequel. The line helps build up a lot of anticipation for the sequel and also makes you think about the events that could lead up to this twist. It’s definitely the way to do it and of course when you know a sequel is coming up then you definitely want to end with a big cliffhanger. Don’t do anything half heartedly just go all the way with it.

Overall, Kill Bill is one of those films that would be absolutely great if it just had way more restraint. Of course it’s always tempting to make a big revenge film as over the top violent and dark as possible so you really root for the hero to defeat those evil villains but it also means you will be cringing a whole lot constantly during the film as violent things just keep on happening. The film is certainly creative with the visuals for some of these moments which means it will be more difficult to forget them as well. There are countless tales of titles with tons of potential that was wiped away by excessive content and this is just another one to add to the list. We’ll see if part 2 is able to change that.