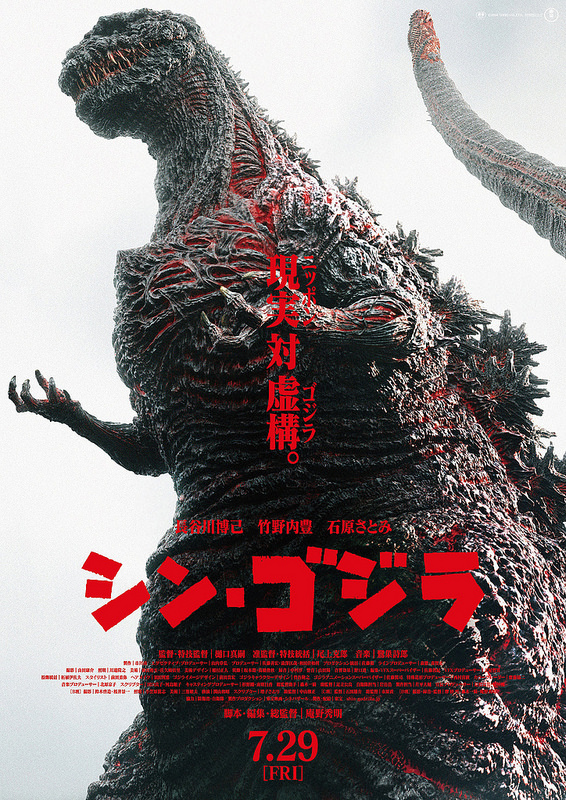 Godzilla is a series that I had always wanted to check out, but it took me quite a while to do so. Finally, about 2-3 years ago I went back and checked out every movie in chronological order. To this date, it is probably one of my biggest achievements. This film would be my first Japanese Godzilla film in theaters so I was ready for a blast and a half. It’s definitely a very solid film and Godzilla certainly does appear more than he did in the American film, at least it felt that way to me. While it definitely loses to a lot of the classic Godzilla films as I enjoy the Mega Monster brawls, this will certainly be remembered as a classic.

The plot is fairly standard for a G film. Godzilla has arisen and now the Government must try to find a way to suppress him before the whole planet is put at risk. Japan will have to do this while also keeping the foreign governments happy. America is willing to use their nuclear options and wipe Tokyo off the map if necessary. The old guard is at the end of their ropes so it is time for the next generation-led by Yaguchi, to save the day. The real question is..can they defeat the King of the Monsters?

Controversially, this film was confirmed to not have any antagonist for Godzilla from early on. That was a shame in my opinion because the monster fights are the main reason why I love the Godzilla films so much. There are many films that only have a single monster like the Beast from 20,000 Fathoms or King Kong, but the battles are what separates Godzilla from the pack. Not to mention that in my very controversial opinion, the films where Godzilla has no antagonist are typically the weaker ones. One day I want to come up with my personal list of where I would rank each Godzilla film. It’ll be difficult though since there are so many and you can make a great case for most of them. Sometimes I can barely put Final Wars as my favorite because GMK and the classic Ghidorah The Three Headed Monster are so good.

Lets launch into the positives. I was expecting this Godzilla film to be really serious and over the top dark based on the title. “Shin” usually means that something is going to be dark and dreary. The film is serious, but Resurgence has a lot of light hearted moments. I got to see this in a fairly packed theater with an energetic crowd and people were laughing constantly. The film feels just as comedic as the original Showa films at some point. It may not always be intentional, but I think it definitely was for at least 80-90% of the scenes. It’s good to be able to mix these tone shifts and the film does it quite well.

The humans never come across as annoying. Yaguchi is a good lead. He may panic from time to time, but he also comes up with a lot of good ideas and never gives up. The American representative Kayoko is also pretty likable. I always like having an American character step into the fray and she feels American right from the start. She is very direct and quippy as opposed to the other serious characters. I also appreciated the film’s restraint with not pushing for a very unrealistic and sudden romance and keeping things professional instead. Friendship isn’t dead quite yet and people can get along without having to take the next step. The Prime Minister was also fun as he was clearly out of his depths, but tried to keep on a tough face. Watching him and the group switch from room to room was definitely entertaining.

The film showed how having a lot of bureaucracy can be a very bad thing. It’s hard to act on a situation when you have to jump through so many hoops. The film portrays America in a very good light as a result as the country does whatever it wants whenever it wants too. America promotes young people who have fresh ideas and it has led to them becoming a global power. America was also portrayed with the might that is appropriate for them as their missiles are the first thing to actually injure Godzilla. They dealt quite a lot of damage and while I don’t think a nuclear missile would have finished Godzilla off, they are one of the only placed to have such an arsenal up their sleeve. I was definitely very satisfied.

Naturally, seeing Godzilla was also a blast. Shooting Atomic Breath out of his spikes and out of his tail was awesome and the whole crowd cheered quite a bit during this moment. It’s a little morbid since he basically took out an entire city, but who wasn’t rooting for Godzilla? I was definitely on Team Kaiju from the start. Godzilla keeps the army at bay for quite a while and he looks fairly tough as you would expect. However, I wasn’t completely thrilled with his portrayal as I had some negatives.

My first gripe is that they went with CGI for Godzilla instead of a suit. CGI can work decently well at times I suppose, but this wasn’t one of them. This is easily the worst Godzilla design of all time aside from the 1998 film which barely counts. People chuckled when Godzilla first appeared in his Rooster form and I was fairly shocked. Luckily, it was just something to throw us off, but I don’t think that Godzilla’s first stage should look like that. Even once he turned into his final form, Godzilla felt fairly off. I’m not crazy about the fact that it always looks like he is bleeding when he walks and that he has to shoot out blood in his first form.

While I don’t mind the narrow stream of Atomic Breath, it certainly looks more impressive when it is a wide blast. Also, I don’t like the way his face has to completely open up in order to shoot the blast. It looks a little gross and disturbing like the Predator’s true face in the classic horror series. It almost makes it seem like a weakness as he will be very vulnerable during that time. The back rays are still cool as they can react in time to stop high speed missiles, but Godzilla shouldn’t run out of energy so quickly. I always have to mention moments that I deem as “plot hax” in these films and Resurgence is no exception. The humans obviously have to come up with some kind of plan at the end, but I would have been more content with Godzilla just walking away like in the 2014 movie. Without going into detail, the plan should not have worked. Godzilla seemed to lose all of his smarts as he walked into every trap and expended energy when he did not need too. It should have been game over for the humans right from the get go and even knocking him down was a bit of a stretch. Either this Godzilla is less durable than some of the others or he just underestimated them. If the film was trying to portray the latter, I didn’t quite buy into it.

The soundtrack for the film is definitely pretty good. There were one or two themes that were memorable like the opera esque tune. Seeing the original Godzilla theme return with a new remix was definitely a lot of fun as well. I was actually expecting more homages to the original films, but I suppose you don’t really need them since the film holds up so well on its own. I really would have liked a good cliffhanger to end the film though. I suppose you could count a certain scene as a possible cliffhanger, but I wanted another monster to roar or something. This film seems like it isn’t really leading up to a sequel so maybe we’ll the next live action film will be another take on the classic franchise.

While listing all of the films in order is tough, in order to celebrate Godzilla’s latest film I thought I’d give it my best shot in this review. Tentatively here’s how I rank them and each row is in order. Keep in mind that these ranks are comparatively so just because a Godzilla film is in D rank doesn’t mean that I consider it to be remotely as bad as films like Pixels and I Know What You Did Last Summer. I’m doing this list off of my head so I’m not looking at my older reviews or blog posts for reference. As a result, the list may look a little different than it would if we went purely by the scores that I gave. It’s been a while since I saw these films so I may remember them differently, but I also didn’t have time to look at all of my posts so this was a little simpler.

It’s definitely tough to list them all and my feelings on the films can be really contradictory. Take Godzilla (2014) and Godzilla Resurgence as they are the two latest films. On one hand, I feel like Godzilla was easily the more intense film. The action scenes were great and the Muto made for a really good villain. The mythos around the film are more interesting and the ending was much better. On the other hand, the human characters in Resurgence were far superior as well as the writing and the pacing. Resurgence never drags on or has any real filler scenes. It captures the impact of Godzilla’s first appearance a lot better and the comedic tones work really well. So…should Godzilla really beat Resurgence? Both films are just so close that it is really hard to stick with one over the other for long, but alas decisions must be made at some point.

Overall, Godzilla Resurgence is definitely a fun film. The humans are easily some of the most interesting and least annoying ones that I have seen in a very long time. I also haven’t seen a Japanese live action film in a very long time so it is interesting to see how they film the movie as opposed to the ones that I’m used too. There are a lot more close ups on the characters, which worked well for comedic effect, but I don’t think I would want that to happen too often. The only real weak point of the movie is the fact that there are no other monsters and that Godzilla’s design isn’t all that good. Still, I definitely recommend it to all Godzilla fans and to anyone that likes a good creature feature. The pacing is very quick so the film never drags on. I look forward to seeing the new Godzilla animated film or the American one coming up. Either way, I will be awaiting them at the theater.