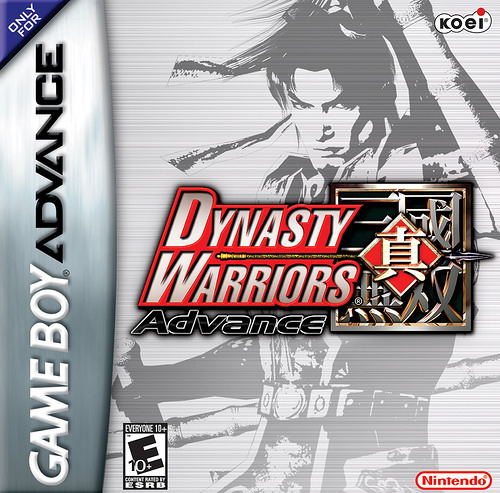 I own quite a few Dynasty Warrior games, but I haven’t had a chance to play most of them yet. I have 2,3, and 4 at the ready, but other games have taken priority so far. I hope to get to them soon, but in the meantime we have the Game Boy title to work with. Considering how old this game is, I’d say that it did a fairly good job of capturing the style of the main games. It could use some polish though and certainly shouldn’t be known as a great game. It’s fun to play through, but it’s the kind of game that you won’t find yourself coming back to.

One major gripe that I’ve always had with Dynasty Warriors is that the story is never all that interesting. The characters all start to blend together after a while and likewise with the armies. The plot is always about beating an army somewhere, but you don’t get invested into the plot. The same can be said for most beat em ups like this such as Samurai Warriors and Sengoku Basara. However, I give Basara more credit as at the very least, the Devil Kings spinoff did a good job of adding in a lot more personality to the characters and giving more of a full fledged story. At any rate, the story in Dynasty Warriors Advance is around, but you’ll forget it all as you play. All you need to know is that you’re beating up the villains. (Most of the villains end up joining you as allies anyway. It’s a little cheesy to hear a villain talk about how you must unite the land after you finish giving him lethal injuries, but at least it shows that their hearts were in the right place.

The gameplay is fairly simple and you have two different attacks. You have the standard slashes and power moves. Mix them together to create combos. You also get a final smash where you are completely invincible for a few seconds and can land some really devastating attacks. You can also block although I never bothered with that function. You’ll find that you can beat most levels by just spamming your standard attack. Most of the game is fairly easy except for the final level and one boss. Those guys are pretty crazy so you’ll want to harness your inner Kraft and cheese your way to victory. Just use the A button to fire dash an opponent. It has 5 hits, but you want to run midway through the attack. If you do this right, you’ll be able to zip in and out. This will deal some damage, but also get you to safety so the opponent can’t counter you. It can take a painfully long time to win the stage, but it beats losing and going back to the last save point right? I had to replay a level twice because I hadn’t saved recently. In my defense, I didn’t expect those random difficulty spikes to show up.

The boss was very overpowered as she would freeze you and then just as you would break free…she’d freeze you again. You had to button mash really quickly in order to escape her infinite combo. I don’t know why the difficulty spikes were so erratic, but I suppose they added a level of depth to the game. I believe there is even a hard mode in case you want to really test your skills. You’ll probably want to use the blocking feature a lot more if you choose to do that.

Graphically, the game is rather sub-par. Granted, the Game Boy Advance can’t expect to look like Sonic 2006, but the sprites just seem more compressed than they should be. I think the game definitely could have put in a little more effort if you ask me. I know that even for home console games, graphics are supposedly not as good in beat em ups since they have to process so many enemies at a time, but I still say that Hyrule Warriors had really impressive graphics. It’s probably the most impressive beat em up games although Dynasty Warriors Gundam also looks quite good. There isn’t really a soundtrack in this game as it’s all extremely generic music that will put you to sleep. I actually almost did fall asleep when I was playing this on my way back home from Texas and had to switch back to Professor Layton to wake my brain up.

The game is fairly short as it only has around 5-7 levels in it. Granted, the levels range in how long they are as some are pretty quick and others are long. Unfortunately, the game forces you to watch all of the turns and there are a lot of minions who will approach you so be prepared to fight a lot. I would have liked it to have been free roam like the home console versions, but I understand that this probably would have been impossible for the GBA’s systems to handle.

Overall, Dynasty Warriors Advance is a decent game. My main issue with it is that the game can be very repetitious. You’re basically using the same attack forever and since the story isn’t even engaging…there’s just not much to this title. You’ll complete it, but then it’ll go back on the shelf. I think the game did try to be a little deep as there are a lot of weapons to equip and you get level ups to make the characters stronger, but it rarely mattered all that much. I do recommend always equipping the strongest weapon to save some time though. If you like the series a lot, then you should check this game out. It’s an interesting portable take on the game and while it was only just barely successful, I still wouldn’t call it a bad game. It’s fun when you first start it and the game only starts to be a bit of a chore by the very end due to how repetitious it is. One way to alleviate this would be to play the game in short batches. 1-2 levels at a time is probably a good way to pace yourself.