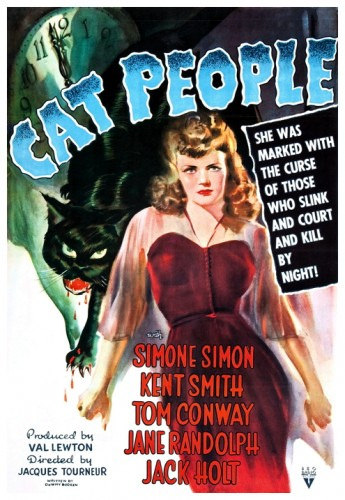 It’s time for an old school horror film. The Cat People is one of those films that makes you shake your head. It was pretty good for about 90% of the film and then drops off the mountain in the closing scenes. It was so close to being a good film, but just couldn’t hang in there. It’s like they say about entering competitions. It’s not about how you start, but how you finish. It may not seem fair, but a bad 10 minutes can completely nullify a good 60 minutes. Negative moments have always had more influence than positive ones because they will just stick in your mind. That’s basically what happens here.

The film follows a lady named Irena who is approached by the flirty Oliver. Clearly this guy isn’t shallow despite going on the offensive immediately so Irena drops what she is doing and the two of them become a couple. The one problem is that Irena comes from the clan of Cat People and she is cursed with the ability to turn into a cat whenever things get past the friend zone. Oliver doesn’t buy this and slowly gets fed up with Irena. He decides to quickly get a new girlfriend before actually breaking up with Irena. He then lets her know about this after she goes through the long ordeal or curing herself. Well…it’s time for revenge!

Irena is actually a pretty good main character. She successfully fights off her impulse to destroy Alice the whole time and also prevents herself from going into the cage where the Black Panther was. She was doing it all to cure herself and become a normal person, but being back stabbed at the last second was the final straw. It was a shame, but now this forced Irena’s hand. The final bit gets rather crazy as she basically destroys herself and then the cat that she freed also dies as it is run over. The ending will just have you shaking your head. What happened to the writers?

Well, the film definitely makes Oliver as unlikable as possible. I wonder if it was intentional though because it doesn’t necessarily feel like it was, but you can’t really tell sometimes. Well, the intent doesn’t matter so much in the end though. You’re rooting for Irena to get him, but this just doesn’t happen. Oliver is too crafty and Irena is too nice for her own good. Alice certainly isn’t any good either. She goes after Oliver the whole time despite knowing that he is taken. She essentially tempts him into making the wrong call. He’s just as guilty as she is, but it doesn’t make either one of them likable in the slightest.

Judd is the psychologist who tries to cure Irena. At first he was a likable enough character. He knew what he was doing and wasn’t handling the situation all that badly. Unfortunately, he decides to go mad with power after that and decided that he wanted Irena all to himself. It doesn’t end well for him, but the whole plot was rather pointless and certainly didn’t need to be included. It’s just another moment where you have to wonder where the film was going with this.

The scenes with Irena as a cat were cool. She did a good job of really putting the fear into Alice and again, I have to give her credit for not finishing the job. Instead, she merely settled for intimidating Alice and subtly hinting what would happen if she didn’t stop playing games with Oliver. Alice ignored this in the end, but Irena still didn’t destroy her. By the end, Irena was certainly willing to, but chose to simply end it all instead of going for revenge. It’s a decision that is incredibly rare for this kind of film.

Unfortunately, we had to have that animal violence towards the end. Having the cat get run over was just pointless and I don’t think that Irena needed to have such a sad ending. Couldn’t the film have just had her go back to her village or just roamed the forest on her own? It would have been more satisfying and not quite as grim. The whole rushed plot with Judd also didn’t do any wonders for the movie. Such a shame, if the film had run its course without any of that nonsense, it could have definitely gotten a 6 or maybe even a 7 depending on what the alternate ending would have been. Still, what ifs and could haves don’t ultimately mean much. Also, another scene of animal violence had a bird die either of shock or Irena’s hands were too much like a cat’s and pricked the bird. Either way, it was another sad moment which really stopped the film’s chances of being good.

While this is sort of a creature feature film, it’s played more seriously than titles like Creature From The Black Lagoon and the old Showa Godzilla films. I think it did try its best to be a horror film. The scene where Irena stalks Alice through the shadows and Irena barely makes it to the Bus Stop is definitely a horror moment. The music cuts away and it gets eerily quiet as she slowly starts to run instead of walk. There’s a lot of tension in the air and the scene was definitely handled well. It was a fun moment and again, I thought that Alice was going to die there. The whole film’s approach would have been different had that occurred as Irena would have likely just taken everyone out. Of course, then it’d just be a generic slasher film and it probably would have been even worse.

Overall, The Cat People is a film that had promise and handled itself pretty well for a while, but then it fell down. It’s still a lot more classy than most other horror titles. Unfortunately, the film simply couldn’t keep it up and Oliver really did his best to put himself in a bad position. The ending really prevents me from recommending this film and you should probably just watch an old Scooby Doo film instead. Those films typically have good endings and you’ll still get your share of scares in the meantime. You won’t have to think about lost possibilities either or wonder why Oliver got to have a happy ending despite being such a mean character the whole time. Also, why did a lady from the lost village show up if she was just going to vanish and never appear again? She was definitely real since everyone saw her. Maybe she traveled all the way to the big city just to mock Irena. I guess I wouldn’t put it past her.