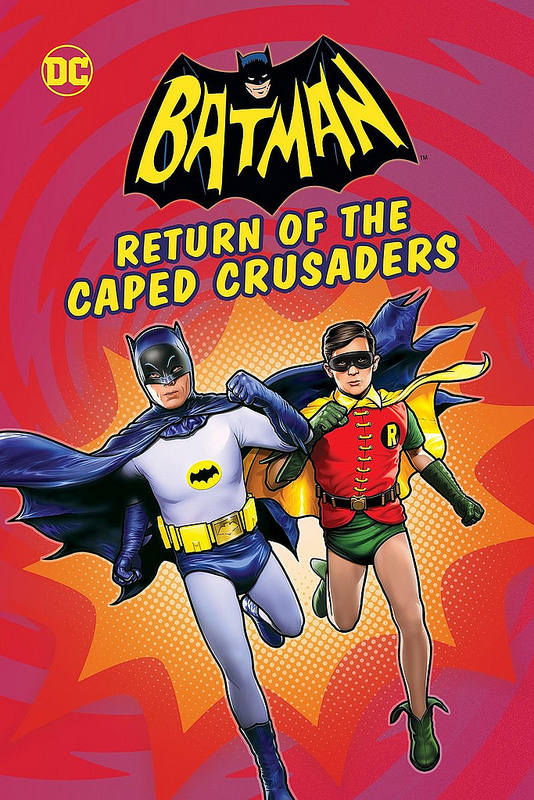 This was a movie that I definitely had high hopes for. I’ve always been a huge fan of the Adam West depiction of Batman and seeing it come back in movie format was quite the treat. Recently I got to read most of the trade paperbacks for the current Batman’66 comics (I’m behind by a volume now, but that’ll change at some point) and it just reminded me how cool he was. The film does a great job of bringing the characters back with minimal changes although it is also a huge missed opportunity because it breaks away from what made the series great towards the middle. More on that in a bit, but this is still a very good film that I recommend checking out.

The film starts off with business as usual for the daring crime fighters. They foil another plot by Catwoman, Penguin, Riddler, and the Joker. It’s a close fight though since the villains don’t play by the rules and have a lot of henchmen as well. Still, things are going smoothly until Robin notices that Batman is acting a little differently than usual. He’s quoting Frank Miller and using more extreme methods of taking down the villains. It would seem that Batman has now defected to the side of evil so Robin must team up with Catwoman to stop him. Can this unlikely pair defeat Batman or are they doomed before they have even begun?

So, that’s the missed opportunity that I talked about. Batman turning evil takes away from some of the fun because the whole point of what makes Adam West so cool is seeing Batman reprimand everyone and show why he is the perfect citizen. Nothing gets to Batman and he even obeys the smallest laws possible like not walking through a busy intersection. Batman’s antics and great quotes are the best part of the film, but we lose them by the halfway point since he is now evil. It was a risky move and I’m afraid that it did not pay off. As such, the first half of the film is far better than the second. The second half isn’t bad of course, but it is certainly a lot weaker.

I don’t really need to talk about Batman much because you get the memo by now. He’s an awesome hero. As a villain he is fairly interesting as well. The voice actor always does a good job with him and why not? West has a lot of experience voicing the character even though it’s been so many years. Batman may be a little naive and gullible when it comes to Catwoman, but every hero has a weakness of some sort. As far as that goes, this isn’t all that bad.

Robin’s a great sidekick and nice foil to Batman’s character. He’s the guy who always makes the small mistakes so then Batman has to reprimand him. Robin means well though so you can’t really hold it against him. His heart’s in the right place and he also sticks up for Alfred when Batman starts to go over the top. It’s easy to see why Robin’s always been such a fan favorite, this is one of his best depictions. Commissioner Gordon and the Mayor were also fun to have around. They are pretty open about how much they depend on Batman and they do tend to be lost without him. You need a Dark Knight to save the day from even the smallest of crimes when the cops are used to hanging in the background. It backfires a little when Batman turns evil, but at least they took it in stride.

Joker and the gang are also fun. This is the classic Joker that I’ve missed. He isn’t afraid to throw a few punches, but never forgets the one liners. The Riddler may love his riddles, but he does resist the urge to give one to Batman when the plan is fully in motion. Penguin has slightly less character than the others, but he’s a fighter and doesn’t go down easy. As for Catwoman, she mostly uses Batman’s emotions against him to take the upper hand. It’s a viable strategy though and if it works…it works. The 4 villains make for a very potent team and I don’t believe that Two Face will be able to top them in the sequel.

Aunt Harriet is one of those characters that I sort of miss from the old days. She can be super annoying so on one hand it is cool to not have her around anymore. On the other hand, it was interesting to have someone on the inside who was always trying to figure out Batman’s true identity. She really came close many times so I think it’s safe to say that she is a great security risk. One of the best scenes was when Batman arrived in the nick of time to prevent her from picking up the red phone. It did cost Alfred quite dearly, but he really shouldn’t have allowed her to get anywhere near that room. Surely Batman should have had some better defenses in place as well. The characters should all share the blame on that one. Aunt Harriet is certainly persistent with how she constantly goes after Batman and Robin.

There are a lot of stand out moments in this film. Again, the voice acting is excellent and so is the writing. This makes for a lot of really good scenes and Batman is excellent at sarcasm. The brief period where he is still a hero, but a slightly meaner one is also handled well. He’s grumpy, but still reasonable. I would have been more satisfied with the plot if he had stayed at that level instead of becoming totally corrupt. His “Frank Miller” fight scene against the villains was also pretty fun. You can’t help, but feel bad for them by the end of it though. They’re just not used to this level of violence from the normally polite and mild mannered Batman.

The animation is pretty sharp, yet familiar. The designs transition into animation very smoothly. The movie doesn’t get to show off its animation all that much, but it’s crisp enough where you can tell that it is good anyway. This movie’s audio is also quite good with the classic Adam West theme popping up and a lot of other retro tunes that you will associate with this era of comics. It helps to complete the package as a great retro event.

Overall, Batman: Return of the Caped Crusaders is a return to greatness. While the second half weakens it a bit, the film just barely manages to cling to its high score. I have been less than thrilled with a lot of the recent DC films so this was a really nice change of pace. I do think that it was an improvement over the first Batman Unlimited film as well. I’m definitely glad to hear that there is already a sequel in development. This could potentially be a nice long movie series if DC plays their cards right. If you’ve never seen the Adam West show before then I super highly recommend this. You’ll be in for quite the surprise when you see this depiction of Batman. It’s very unique and like nothing that you will have ever seen before. Even if you don’t really follow comics, I recommend checking this film out for the strong dialogue and good technical qualities throughout. If the sequel plays it straight through and through, prepare for an even greater film next time. I have really high hopes for that one so I’m hoping that it can deliver!