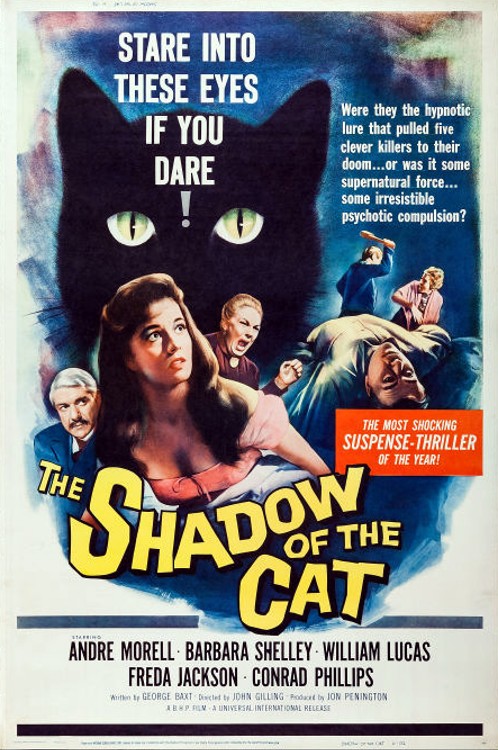 It’s time for another old film, but one that certainly ended up being quite a lot better. It’s a solid film with an engaging plot and it never drags on since the film is barely over an hour. There aren’t really any good characters for the most part, but that’s fine since they will go down one by one anyway.

One day, Ella is murdered by her butler Andrew. He was in cahoots with her husband Walter and the maid Clara. The three of them took her out so they could grab her riches. Conveniently for them, they even have a Will signed by her that gives everything to Walter. The problem is that her real will is somewhere in the house and they can’t find it. Well, no matter. They invite Beth over because the real will gave everything to her. They just need to take her out of the picture so they can be really safe. The problem is that Ella’s cat saw the whole thing and now she is out for revenge. Can the adults handle one cat or are they doomed!?

The Cat is definitely the MVP here. It’s hard to deny it since the Cat is by far the most efficient member of the cast. One by one she bumps the villains off and does so theatrically. She lets the others know that they will be next and even gives the main villain a heart attack. Walter and the others begin to fear the Cat quite a lot while also disliking it more and more. The ball is still in the Cat’s corner though and she knows the place like the back of her hand. She knows that she can pick off the others whenever she wants so she bides her time…and pounces when the time is right!

Naturally, there’s no way you will feel bad for any of the villains. Andrew murdered a defenseless old woman so he was doomed from the start. Even when he managed to capture the Cat for an instant, he underestimated how long it would take to get to the river and was quickly drowned by the Cat. It was all over for that guy. Walter’s death was only a matter of time as well as he started to have strokes and heart attacks whenever the cat was near. He played the part of the nice guy when everyone else was around, but he couldn’t trick the Cat. Finally, Clara may not have been as directly involved, but she was in on it so that made her guilty as well. Her end was just as intense as the cat slammed her to the ground…from a few stories up! She never stood a chance against the cat’s technique and skill.

Seeing as how the villains were getting tossed and turned the whole time, Walter called for some backup. He invited his corrupt family members over and they all wanted to end his life as well. Clearly, this may not have been his best move and it turns out to be his final one. It’s not like they have any more luck against the cat though. They talk a good game, but simply don’t stand a chance. Not even the ex-con is clever enough to stop the cat.

As for the heroes of the story, I might as well start off with Inspector Rowles. He doesn’t believe this “rubbish” about a cat murdering people and is content to just walk around and look important. He’s easily the most likable protagonist as you have to admit..would you believe that a little cat was destroying everyone? It is a little hard to swallow so I can accept his response. At least he wasn’t too unreasonable and still suspected the villains by the end. Michael’s a reporter who is very eager to believe what is happening and gets to the bottom of the puzzle right away. He’s certainly skilled as he found out everything. His romance with Beth was handled poorly though as it just happens out of the blue. Even then Beth doesn’t believe him about how Walter is evil and she is slow on the uptake the whole time. Beth was pretty annoying. Her worst moment was when a butcher knife was thrown at her and Beth didn’t really care. She just shrugged and kept on going instead of stopping to think that maybe these people are dangerous. She accepts that they are bad people when they keep talking about murdering the cat, but she never does anything about it. She’s also a little too accepting of the fact that she wasn’t in the will. Beth should have suspected foul play there.

This film could have easily taken a wrong turn if the cat had actually been captured and destroyed. The film would have went the ghost route as it avenged itself, but it still would have been too dark. Given how desperate all of the villains were to murder it, I wouldn’t have wanted to give them the satisfaction. How the film went about the plot was just about perfect if you ask me. I mean, it would have been hype to have seen the cat pick up the gun and shoot everyone, but the slow and steady approach worked as well. It’s definitely not too often that you see a cat destroy everyone. The film isn’t too violent either. The most violent scene is probably when Ella got murdered and luckily we get that over with right away. The Cat should have helped there and I was a little surprised that it did not, but at least the Cat helped to avenge Ella later on. Better late than never I suppose.

What also makes this film a little different is the fact that the Cat is avenging Ella as opposed to just being an evil cat who murders everyone. None of the heroes are bumped off since they weren’t responsible for destroying Ella and the new family who moves in should also be safe in theory. I’m sure that the cat would have made for a good villain as well, but it was a nice change of pace to see the Cat as a vigilante hero.

Overall, This is a pretty fun film. It’s not a comedy I believe, but plays out like a good natured slasher film. I know that the term slasher may not be the most appropriate here, but how else do you describe a film where a mysterious, super powerful villain begins to bump off all of the humans one by one? Regardless, the film kept it classy throughout and while the villains were all evil and unlikable, the film never went too far to show us just how gritty and dark they were. Moderation is always key and this film did a good job of that. I definitely recommend checking it out and I’d say that this one beats the Black Cat. We’ll see if the Black Cat sequel can match up to this one though.