This review is of the edited TV-14 version of the film. All thoughts below should be addressed as such as a review of the unedited version would be even more negative…literally. 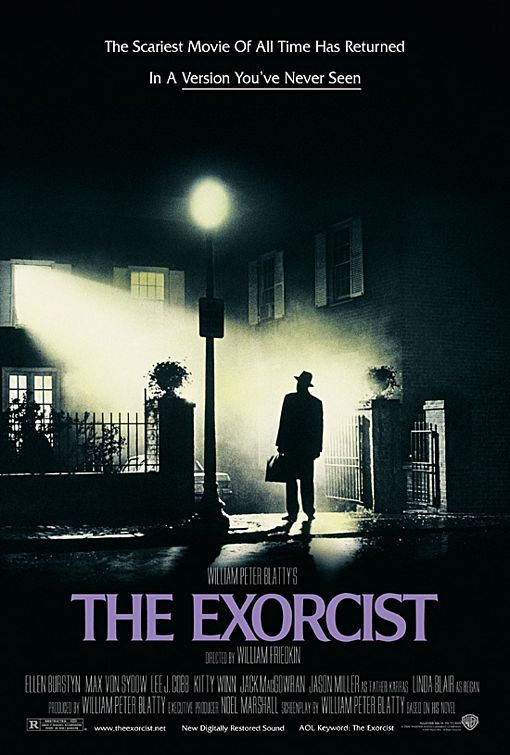 It’s time to tackle one of the most well known horror films of all time. I’ve never liked horror films and watching the classics hasn’t worked out so well thus far. I had pretty low expectations heading into this film, but The Exorcist managed to surprise me. It delivered a product that was so below expectations that I was slightly taken aback, but quickly realized how I had to respond. This film is one that you’ll want to avoid at all costs and will remind you that shock value isn’t as good as jump scares.

Chris is a popular actress and everything is going right for her at the moment. Life can’t get much better than it already is at the moment. Unfortunately, that changes when her daughter Regan is possessed by a vengeful spirit. It claims to be Lucifer himself and she has been unable to break free. Chris goes to many experts, but they are all unsuccessful in their attempts. Finally, she is forced to call in a pastor/psychologist to try and perform an exorcism, but he has yet to break his drinking/smoking habits. The Church realizes that this guy is out of his league so they bring in another priest who is experienced, but already very exhausted from another exorcism that he performed. Can the two save the day or will the body count continue to rise?

Some films like this one are a little overwhelming as it’s hard to know where to start. I suppose there are so many negatives that I should start with the positives first. The soundtrack isn’t bad. The iconic theme is definitely fun even if it only shows up for a few seconds. It actually felt like a remix since I’m used to a more battle ready version of the song. Still, it’s definitely withstood the test of time. The visuals are pretty advanced for their time as well although they typically go for grotesque imagery as opposed to cool sci-fi elements. Poltergeist III has definitely got it beat in this area. The film puts out a lot of effort….yeah now lets go to the negatives.

The film paints a pretty bleak picture on our struggle against demons. First of all, I’d like to give it props for giving the Church some credibility and having them go up against the demon. However…it acts as if the demons are far more powerful than any of our counters. Our Exorcism (This film’s old, but just in case I’ll give out a warning. Spoilers ahead, spoilers ahead. Proceed at your own peril!) fails miserably as the demon just overpowers the two pastors. The two pastors/priests give it their all as they use a lot of verses from the Bible, Holy Water, A Cross, and more. None of it is effective as the demon breaks one of the guys anyway and then possesses the other as it knocks him off. The spirit is then free to go and possess someone else.

There is no happy ending here at all. The demon won and murdered quite a few people in the process. It also vandalized the Church in the process with no repercussions. It’s a pretty sad message from the film in the end. Evil’s not supposed to conquer all. Now, demons are certainly real and they are powerful. That’s certainly true, but they still cannot ultimately resist when called out in the name of Jesus and God. The counter argument could be that the priests simply weren’t skilled or didn’t have enough faith, but at least one of them was supposed to be the best of the best. It’s hard to say whether or not Regan was a Christian or not in the film. She was still pretty young, but maybe she had put the Cross under her pillow since nobody could figure out how it got there. I don’t believe a Christian can be possessed. One could get tempted or put through trials and tribulations like Job, but I believe that we are given an immunity. Playing with the Ouja board wasn’t a smart idea, but it’s not as if playing with a thing like that can suddenly make you free domain. Especially since Regan clearly didn’t really know the ramifications of that thing.

She definitely got the short end of the stick here as the rest of the film’s pretty painful for her. It’s a really violent horror film and while you could clearly tell where the film cut away in the TV version, there was enough where you can tell that this was an intense experience. Regan got a lot of injuries and had to go through many operations during this period. Quite a few people were murdered as well. The film also goes for gross moments like having characters vomit and have to use the bathroom in public. Those moments certainly didn’t help the film at all either. In case you couldn’t tell, this film’s getting a pretty easy 0.

The only reasonable characters here are the Expert Priest and Chris. Chris can be annoying though like when she went to the various doctors and put Regan through a bunch of experiments. She should have known that it’d do no good since it clearly wasn’t a mental issue. The Expert Priest was good, it’s a shame that he couldn’t win. The main priest, Damien was pretty weak willed. He fell for the mind games rather easily and his subplot didn’t add anything to the film. It added more dark themes and grit of course, but the film was so full of that already that you wouldn’t miss it if it was gone. There was a police chief who liked to subtly imply that various people were murderers and did his best to solve the case. It was naturally futile though since it wasn’t a human opponent who he was up against. I suppose he did his best, but bribery definitely isn’t a very legitimate tactic. There weren’t a whole lot of other characters in the film as it was a pretty small cast. We have the demon of course, but it’s only character is that it is a demon. It’s pretty clever as it makes the ordeal or proving that it’s a demon very tricky for the heroes.

Overall, This isn’t exactly a “Feel good” film. You’re not going to be laughing and taking shots of Pepsi and Doritos during this film as you discuss the current state of the movie industry and Twinkie flavors. It’s very somber from start to finish and you’ll be ready for it to end after 15-20 minutes. Unfortunately, it’s a very long film so that’s just the tip of the iceberg. If the whole film had just been about Chris and her acting career, I have a feeling that it would certainly be a lot more enjoyable. Even just removing all of the cuts and slashes on Regan would help the film at least be watchable. You’re averting your gaze for most of the film otherwise since it’s pretty distasteful to have a kid be so violently injured for such a long time after all. Better to just look at the ceiling in the film and wonder when it was last painted. If you want a quality horror film, check out Poltergeist III as it’s one of the only good horror films out there. I can see why this one earned its reputation as it is pretty gritty, but that’s all the more reason why you should stay away from it. It’s just not worth it!

3 thoughts on “The Exorcist Review”