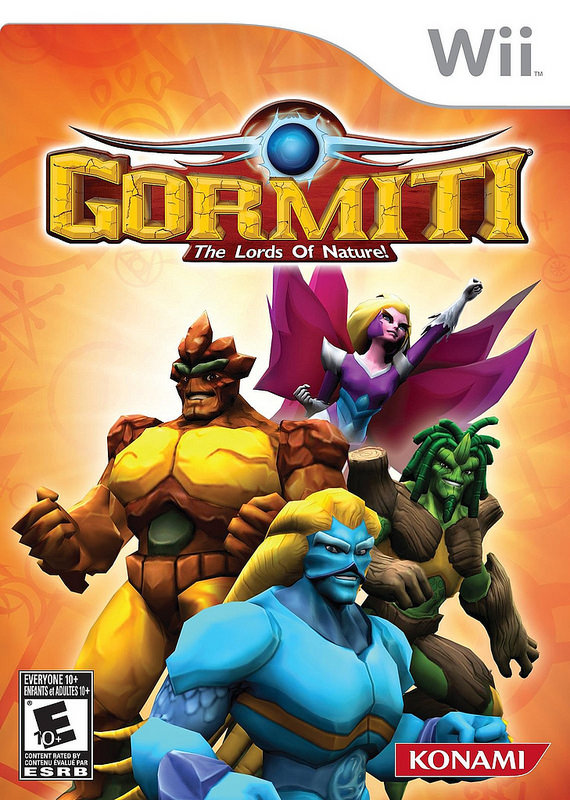 I’ve never heard of Gormiti before, but I’m a sucker for this kind of Wii game. When I saw it in the 5 dollar bin I knew I had to snag it fast. The cover promised me an action game and it did deliver. The game isn’t high budget or anything, but it is a solid step above some of the recent cash in titles that I’ve been playing. It’ll hold your attention a little while as you power your way through the game.

The title follows 4 kids who are your normal citizens by day. What is different about them though is that these kids can teleport to a mystical world where they are actually Lords of Nature. Everyone respects them in the other world and they get a lot of hype. They have to stop the evil monsters because the things they do there affect the real world as well. The villains are trying to merge several amulets so they can open up a portal to Earth in order to destroy it. The heroes must stop them at every turn, but the villains have the numbers advantage and always seem to get back up no matter how many times they are defeated. The heroes are going to want to be careful in this round.

The gameplay is pretty similar to the Legos. It’s mostly overhead but the camera is low enough where it can give the illusion of a 3D game at times. Each character can activate different gimmicks. Blue gets water, Green gets grass, etc. You have to activate various switches and break all of the flashlight statues to get through a level. Interestingly enough, beating the enemies is never mandatory aside from boss fights. As a result, I figured I’d cheese my way through the game and it worked pretty well. Why stop to fight the minions when you don’t really get anything out of it? There are no level ups so it’s not as if I’d miss out on EXP. You can just jump over them.

Honestly, I beat the game in probably half the time I was supposed too since I skipped all confrontations. I would just run to each obstacle, activate it, and then dash to the exit. It was pretty fun even if it was a little insensitive to the hard work that the developers may have put into the level designs. I just couldn’t help myself. You also get infinite lives and you respawn right where you died so the game isn’t really challenging either. For all boss battles you can just keep attacking because even if they knock you out a few times, it doesn’t matter. Just spamming the hit button is the fastest way to win.

You only have two attack options anyway. You can fire a projectile, or throw a punch. Those are your only options so make the most of them. It’s basic and it’s fairly low budget, but at the very least you can’t say that the gameplay isn’t tried and true. I’ll take this kind of gameplay any day over low budget minigames. It’s still action after all and I’m all for combat. Just keep it coming is my motto.

The graphics are okay. It’s sort of like a really old cell shaded style or its CGI. The game’s one or the other, but it’s hard to place. I can roll with it and the character models aren’t bad, but the level designs need some work. There’s just too much orange the whole time. Surprisingly, the soundtrack is actually pretty decent. The boss theme that plays over and over again is nice as it’s very fast paced and gets all of the right beats in. I can’t remember any other tunes, but that was the main one so it did good.

There isn’t a whole lot of replay value here though. The actual game you can likely complete in about 3 hours or so. I guess you can try to get all of the collectibles so you can unlock a bunch of puzzles, but that is honestly one of the worst incentives I’ve seen in a while. You can keep your puzzles man, I’ll just move onto a Layton title if I want to challenge my mind. There isn’t a multiplayer vs mode either so after beating the game there really isn’t much point to playing it again. At the most you may want to tackle some of the tournaments but I don’t see why.

As for the plot, it’s a little too formulaic and generic for its own good. The stock footage of everyone yelling to the chair is easily the most annoying part. Beyond that, the kids are okay. They all seem like classic 80’s-90’s kids with their contrasting personalities and at least all of the villains have designs as well. They’re all fire villains which limits the variety a bit, but I guess I can live with that. The ending is a little rushed though and I wonder why the game chose to have the final boss be one of the older bosses. Not just that, but they chose the easiest one as you just keep hitting him til he dies. At least the others force the fight to be tedious by retreating for a few minutes every time you shave off 1/3 of his health bar. This guy just stays there, but that works for me I guess.

I will give the game some serious credit for having a bunch of animated cutscenes though. You unlock them all after beating the game and it’s a pretty significant amount. It at least shows me that the game had some amount of budget put into it and separates it from the more generic titles. It’s still not exactly Street Fighter, but after the game I feel like I know the Gormiti cast well enough.

Overall, Another Wii 5 dollar bin game has been conquered. I probably would have played this one a lot sooner if I’d known how short and easy it was. For some reason I just never thought of it before. If you can find it for the same price that I did, then it’s worth checking out. It is a fun game, but its biggest problem is that it is incredibly short. It’s hard to justify any game for around 20 dollars if it’s only 2 hours right? Even 10 dollars get to be a stretch, but you can make a reasonable argument with that one. One last tip, use the Blue Gormiti for all boss fights, he has an infinite combo where he just keeps punching forever. Watch out for glitches though.