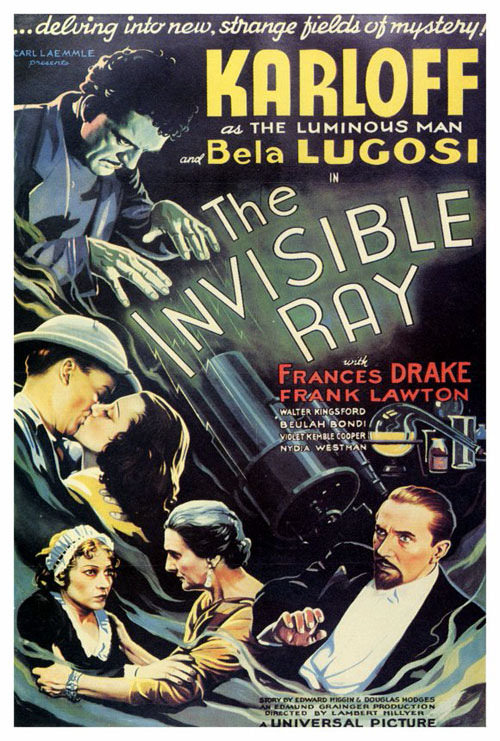 It’s time for a film about a mad scientist’s quest for power. This film is quite old so you are ready for a classic thriller right from the start. Unfortunately, the film slips up with some animal violence thrown in which I had to shake my head at. The film was so promising at first and it really looked like it could have been a winner. Alas, it fell one fist short, but I’ll give it some props for effort. At least it made a fair attempt right?

The film starts off with a rambling mad man by the name of Janos inviting a bunch of scientists to see his latest invention. After a lot of insults are hurled around from all of the cast, the scientists are amazed as Janos shows them something that has happened millions of years ago using a new material. Dr. Benet declares that they should team up. Janos’ Mom tells him this is a bad idea since they are always insulting him and have discredited Janos’ theories for years. The main character decides to go anyway though and joins the team in Africa. They are here to find pieces of the rock that crash landed. Janos decides to take point so he goes ahead of the others. His wife Diana isn’t thrilled about this, but complies for the moment. Weeks pass by and everyone starts to get worried.

It turns out that Janos has been poisoned by the material and is essentially a Radiation Man. A single touch with any living thing causes them to perish. Benet makes him a cure, but he’ll have to use it every day for the rest of his life or he’ll destroy everyone along with himself. Janos doesn’t let this distract him and builds a weapon of mass destruction. Whatever he points the cannon at disintegrates into a million pieces. It can also be used as a healing ray to give someone back their sight and other such senses. Unfortunately, his wife has gone for a rebound and the other scientists have left with his idea so Janos decides to murder them all.

That was a rather long plot summary but it was necessary because I feel as though Janos trying to murder everyone is the main plot of the movie even if it took a while to get there. No worries, the film made Janos as obvious of a bad guy as possible right from the start. He was shady even when inviting people into his house and then he basically had slaves work for him under threat of death if they tried leaving. There was never a moment where I thought “This guy is heroic.” Throw in the fact that he is very quick to start murdering everyone and he is really doomed to the villain role. I can’t say that he is particularly likable either. He holds himself in check better than most villains, but that isn’t quite good enough. His powers are pretty useful though. Imagine being able to destroy your opponents in a single blow. That is really handy if you ask me.

Benet is the other main scientist in this film. He’s pretty charismatic and the best person in the film. He’s reasonable and while he doesn’t like Janos, he puts that to the side in order to help science move along. Unfortunately, he can be a little slow on the uptake at times like when he walked to the door even though he knew Janos would show up soon. He put himself in the worst possible situation at the time and that’s just not where you want to be. He probably shouldn’t have been so quick to cure Janos, but it was the hero move so I can’t fault him for that.

I can’t say that Diana and Ronald were good characters though. Diana was married to Janos so rebounding to Ronald wasn’t a very good idea. Sure, they didn’t get along too well, but she should have at least officially separated from Janos first. She acts as if she never loved him either and only did it because she promised her father. That’s such a terrible reason to marry someone and I just see her as having a lot of fault in this as well as the main character. Ronald went after her even though he knew she was married so he is probably the most guilty character of them all. I just never liked th guy and he didn’t even get a particularly large role in the film. After a while he just stayed in the background for good.

This film’s writing is pretty strong as it is so old. Despite being such a retro classic, the characters are all pretty mean to each other the whole time. They do it in fairly polite ways, but there just aren’t any nice people here. They all have an axe to grind with someone. Even if Diana wasn’t going for the rebound she would be pretty sketchy as she is generally pretty rude to the Africans they’re working with. Most of the characters have that in common.

Unfortunately, the animal violence is pretty bad as mentioned before. There was a fun dog throughout the film who would follow the main characters. It would have been better if he wasn’t even in the film then to be destroyed by the main character. We also got to see the aftermath of a hunt as the main characters take a animal to be eaten. We don’t need any of this, especially in a film that would otherwise be pretty peaceful and happy.

Getting past that, the atmosphere and pacing for the movie were pretty solid. Quite a lot happened in a relatively short amount of time as you can see from the plot summary. The film just kept going on as the plot would adapt and follow. There also was another good character in the form of Janos’ Mom. She kept giving him good advice even if he did end up ignoring it and she made the tough calls at the end of the film. You don’t just break one of the big Science rules and hope to get away from it. That’s just not how things roll here.

I do have to question how smart these scientists are. They believe the whole picture of a meteorite hitting the Earth millions of years ago so easily. Did they not suspect it was some kind of illusion or trick. My first reaction certainly wouldn’t be to stand there and just accept that the man has broken new ground in scientific history. It’s a little hard to swallow and the motion picture wasn’t all that impressive either. They should have called him out on it.

Overall, The Invisible Ray had potential. It has a reasonable cast, at least as far as the banter is concerned and a good amount of action. The characters have to lay traps for one another and rely on mind games for the rest. It’s a pretty interesting film and it’ll definitely keep your attention. The dog scene just stops it from being a good film and the romance was also pretty terrible the whole time. It’s just hard to get past two big negatives like those so I’d recommend avoiding this film. You can certainly find better ones if you look around for a few minutes. That’s all the time you’ll need.