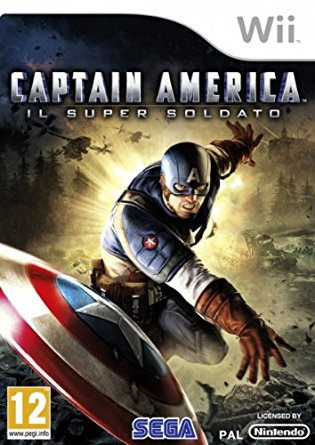 It’s time to take a look at one of the final Superhero titles that I had yet to play in the modern era. A character like Captain America certainly comes with a unique fighting style and one that the game handled well. I didn’t expect to find it for around 5 dollars at Gamestop, but it just goes to show that you never know what kind of gem you’ll find there. As a loyal Gamestop supporter I must urge you to go there, but don’t get conned into going for Elite Reward Status unless you seriously shop there a lot or desperately want the Buy 2 Get 1 Free coupon.

The plot of the game is that Captain America has infiltrated another Hydra base. At this location, Zola is experimenting to create his own version of the super soldier serum and if he succeeds then it could turn the tide of the whole war. Cap has to stop this weapon at all costs, but he can’t do it alone. That’s where the Invaders come in. They’ve got heavy artillery backing then up so maybe, just maybe the heroes have a chance.

At its core this game is a classic 3D brawler like most of the other superheroes. You will do some platforming as you jump from place to place but most of the time you will be beating up on Hydra agents. The platforming is also pretty easy because your jumps automatically link to where you will want to go and an arrow will show if you can make it or not. If you fall anyway then you simply were not paying attention. If you’ve played pretty much any 3D game like this then you should also be prepared to break some switches and handle miscellaneous tasks.

Now the combat is where the game gets a little more creative. This is Captain America after all, you will be going in expecting to use his shield quite a bit right? Well the game doesn’t disappoint. You can throw the shield around to stun multiple enemies. The more you upgrade the shield skill, the more enemies you can target at once. It’s really handy for when you’re surrounded. Of course, sometimes you want to test your mettle in close range combat and that is always a viable option. When fighting off enemies with your fists you can feel the satisfying sound effect behind each blow. Furthermore, your reaction times are important here as you will have to press the Z button when you are about to be attacked to parry the hit and keep on beating them down. The timing isn’t quite as strict as in some other games and it is hard to miss the visual cue. As a result, you can basically fight off armies by the end of the game and it feels awesome. You can be surrounded and then begin delivering your haymakers until the fight is over. The fight style the game uses is very cinematic which lines up well with the films. You won’t even notice the Wii Remote much since you are focusing on just hitting everything. The motion controls only come into play when you start throwing your shield around, but time slows to a crawl at this point so that compensates for the extra time it takes to move the shield around. You will likely still get tagged once or twice in Cap Mode since when you’re surrounded even slowing down time isn’t always enough. To prevent the game from getting too easy, berserk enemies don’t trigger your Cap Sense so you can’t parry them and the same goes for all of the villains with guns.

Unfortunately the graphics aren’t great. It’s not so much the effects or the backgrounds, but it is the character models that just don’t seem right. Captain America’s proportions just don’t seem right. His top half is just too huge and the rest of him looks too small. I guess maybe he just skipped leg day. One good thing about this style though is that it lets the game go all out with giving us mini cutscenes here and there. The scene where a minion shows up and grabs the shield was pretty hype. He quickly learned that I was still more than a match for him though. The music wasn’t especially memorable or anything like that but I did like the main menu theme. It was a nice rock theme that got you hyped for what the game was about to bring in.

There are 9 levels in the game with the average length being about 20 minutes per level. The game isn’t all that long as a result, but it didn’t feel too short either. It’s a fairly standard length for a movie tie-in which admittedly isn’t saying much. You can get the game for a few dollars though so the price helps to counter this. There is a little replay value to be found here as you can go back to the levels and try to grab the collectibles to unlock some more costumes. Not a great incentive for me, but it’s definitely better than nothing. At the end of the day, this is a very basic game with no extra frills. The main campaign has to be enough to sell you on the product and it worked well enough for me.

Overall, Captain America is a pretty fun superhero title. It may not be as high budget as you’d like, but does a good job of depicting what you would expect from Cap’s fighting style into a great gameplay experience. Throwing around the shield just feels right and can really be used to extend combos. Naturally, bouncing it off walls and such won’t work quite like in the movies, but Sega did a good job all things considered. This is a considerable step up from the recent Batman game that I played and I can certainly recommend checking it out. I think you’ll be pleasantly surprised.