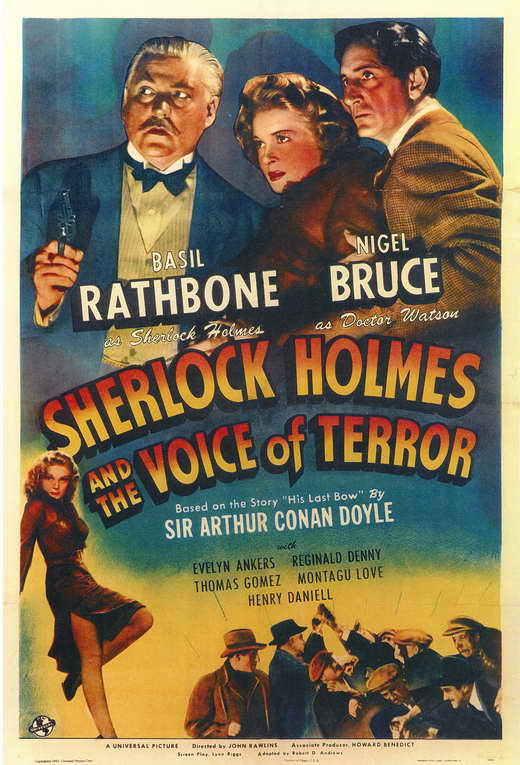 It’s time to look at another Sherlock Holmes film. This one definitely takes a very different approach as it deals with taking down the Nazi’s as opposed to the average crook. It is still a mystery adventure as always but one with the highest of stakes. Should Holmes fail to win the day all of England will fall. Considering that this film came out during World War II it definitely makes sense to have it tie in. While it’s a good movie, this one does feel like a step down from the last adventure.

So there is a mysterious voice which goes on the air once a week to boast about how the Germans keep destroying secret British agents and supply trains. Many civilians perish as well. After the government has had enough of this they call in Sherlock Holmes. Naturally the high council isn’t thrilled as they mock Holmes quite a bit and state that a detective can’t stop such a threat. Holmes didn’t take the case to make friends so he doesn’t care about their chilly attitude all that much but he is determined to crack this case. To that end he will need to get the aid of the underground but will these criminals really band together to help him?

Seeing Holmes talk tough to all of the high ranking officials was definitely amusing. He is portrayed as being absolutely fearless here and that’s really the way that it should be. You don’t get to be the best detective in the world by playing it safe or beating around the bush so naturally he has learned to defend himself. This version of Holmes is a fighter and even at gunpoint he keeps his cool. He’s definitely the highlight of the film although his character doesn’t work quite as well for the emotional scenes.

The scene of him recruiting one of his old underworld contacts, Kitty dragged on quite a bit. We got long zoom ins of her reacting to the news and him trying to look sincere. That being said, the film probably just should have stuck to its guns with the serious mystery and some humor as the other emotional moment also doesn’t sail. We get a long speech from Kitty to the crooks where she attempts to mock them a lot which would theoretically make them want to help. Eventually they took the bait but the speech was a little cheesy.

While it may sound like Kitty just wasn’t a good character, these moments were the exception. She is actually the most important character in the film as she did all of the brain work while Holmes ironically did the leg work. Without Kitty finding out all of the important information off screen, Holmes would have been in quite the pickle. Honestly he didn’t do a whole lot of sleuthing in comparison to the average film. That’s why the conclusion to the film is rather disappointing. It comes across as rather unnecessary as there is no reason why Kitty couldn’t have a happy ending like everyone else. The heroes don’t even mourn much at all as they halfheartedly give one line in remembrance of her and go right back to cracking jokes and having a grand time.

This is especially mean spirited since Holmes is the one who gave her the very unreasonably dangerous job in the first place. He had her allow herself to be kidnapped and then she would be a mole from the inside. There are so many reasons why this could fail but at the very least she should be given an escape plan. At the very least don’t let Kitty be around for the final confrontation but what happened there was mostly just overconfidence on the part of the heroes.

I will say that the villain was pretty interesting. I’m talking about the true culprit who is revealed at the end. I like his smug demeanor and his plan was certainly long term. Waiting 10 years to actually make a move certainly takes a considerable amount of patience. The main underling isn’t quite as interesting. All things considered the guy is pretty generic. You won’t remember him much by the time you finish the film.

As always the writing is pretty good. The banter between the characters is always fun and it’s easy to root for either Watson or Holmes. While Watson may not be as smart as Holmes, he always sticks up for the lead. He is portrayed as more competent than usual here at the very least. Holmes does the talking and Watson always takes his gun out and stays prepared. They have a lot of teamwork here and it’s easy to see why the pair has lasted so long.

As for the council, they are the main suspects in this film. I mean, you could make the assumption that none of them are the villain, but then there wouldn’t be much of a mystery right? Always suspect every character in a Sherlock Holmes film. I feel like the film didn’t really leave any clues as to who the culprit was til near the end but one story was certainly more suspicious than the rest so I guess that is enough to go on. I enjoyed the council though. Sure, they were all fairly stuck up and really seemed to be out of their league all the time, but that always makes for good banter. Holmes definitely had the edge here right from the start though, but the council did their best.

Overall, This is definitely a unique take on Sherlock Holmes and it isn’t a bad one. The ending does slightly sour the experience though. Fortunately the writing is sound and the characters are interesting so there is still a decent amount of replay value here. The film is also quite short as well. If you want to check out a Holmes film for the first time then this isn’t the one to pick. However, this is still a solid film for fans who just want to enjoy a good thriller and for longtime Holmes fans to see him in a different environment.