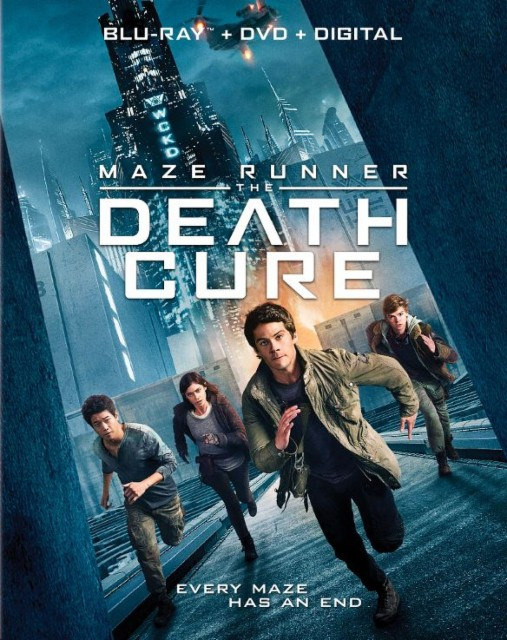 It’s been quite a while since I saw the Scorch Trials but I knew that someday I would finish this series. That time is now and the Death Cure actually isn’t a bad film. For the most part it’s actually pretty solid but ends up losing a lot of steam by the time it reaches the ending. There really isn’t much of humanity left to save either.

The film starts with an almost humorous action scene where the main characters steal an entire train, knock out all of the guards and then fly out of there. They are lucky that the guards can’t shoot straight or that they had no cameras active to see the obvious traps that were set out for them. This sort of plot hax will be around for a while so now is a good time to get used to it. The characters have now freed over 100 kids and are ready to sail off to a better tomorrow. The problem is that one of their friends from the first film is still captured. Thomas, Newt, and Frypan head off to find him before also being joined by Jorge and Brenda. They will have to break into the enemy stronghold to free him and will have to risk everything one last time. Can they do it?

There is certainly a lot of action here. We have constant gun fights and miscellaneous explosions occurring off screen. There is even a hand to hand fight near the end. Naturally these kids aren’t exactly master martial arts so it’s really just both sides throwing a lot of punches as opposed to a lot of crispy choreography. The climax is really just one large war zone as the characters try to make it out in one piece.

The pacing isn’t bad either as things tend to move quickly. The heroes are rarely given a chance to rest and so the film is moving a lot as well. I can’t say the writing was all that good though as characters constantly sound like they are in a horror movie with all the needless yelling. The character cast also isn’t amazing and I had some issues with the ending. To explain why the ending is no ot that good without spoilers is a little tricky, but here goes. The whole film series is really about choosing a side. Is the government right for sacrificing around 50 kids to save the human population or should the kids simply escape but also soon humanity along with them? Well the choice was taken out of your hands early on as the government is unnecessarily cruel the whole time. They even go so far as to attempt to destroy one of the kids when harnessing his blood slowly would have been safer and could have saved more people. It’s also worth noting that their cures keep failing so they are gambling the kids lives on just a hunch. Then in the ending we basically realize that all hope is lost. Unless there is yet another lost city in the middle of nowhere but that would be super convenient. It means that the whole trilogy was ultimately pointless for most of the human race.

As I mentioned earlier there is also quite a lot of plot hax to be found here. The villains constantly seem to be on the losing side when they should have this in the bag. The amount of times they yell “freeze” is almost funny because the heroes absolutely never listen and it always results in the villains losing once again. The scene where the bus is surrounded is the worst part as they just watch one of the characters clip it to a construction crane and lift the bus out of there. They probably should have fired their guns.

Thomas is the main character and he is definitely no good. He is said to be a very forgiving character multiple times in the film to the point where he is ready to quickly forgive Teresa after she betrayed the heroes and took a role in torturing one of his friends. It’s not necessarily a bad thing that he forgives everyone but Thomas isn’t consistent about that. We’ve also got a kid who was mind controlled and forced into destroying another kid. The guy seemingly died but now he has returned and Thomas absolutely won’t forgive him. So really, it’s not that he is a forgiving person by nature, he just likes Teresa so he is willing to overlook her faults. He doesn’t handle the romance situation very well either and tends to not make very good commands as the leader. He’s just not a guy that you would want to follow into battle. Especially since he is always admitting that he has no idea what they are even doing.

Then we have Teresa who does not regret turning evil. That should mean she will be portrayed as a villain right? Well surprisingly the film actually tries to make her a little sympathetic with the classic the Ends Justify the Means line of thinking. That didn’t fly back in the day and it still doesn’t. She is on the wrong side and the film did a poor job of trying to show her switch sides or even making her cause look legitimate. As such the character was just pretty bad the whole time. The same goes for her Boss who spends the first two films capturing the kids and putting them in painful experiments. Now she is finally having second thoughts and it’s just way too late for that.

The only good villain is the main chief of security, Janson. He is sticking to his guns literally in this film as he shots quite a few characters and also knows how to fight. I mean, he’s not a great fighter as he can barely go even with Thomas but I suppose it’s a start at the very least. Janson also knows when it’s time to pull back and just win with a gun instead. His demise seems a little hard to buy since he would have known the room better than anyone and what it would take to break the glass though.

Newt was a solid character. He always does his best to support Thomas while also calling him out when the lead starts to act fishy. He has been infected for a while but manages to keep it quiet so as not to distract from the mission. Newt does have his typical blow up moment at Thomas which comes off as rather forced but that’s really his only iffy scene. Then we have the ex bully who still calls Thomas greeny. Honestly I barely remember the character at all so he may as well be a new character in this one. He is the commander of the resistance (How’d that happen?) aside from one old man who is consulted at times. He doesn’t tend to panic as much as the others and saves the leads quite a few times so at the very least he was really good in this film. More prepared than the others at the very least.

One scene that will really stick with you is when the main characters walk into a dark tunnel and are basically unarmed. Even if there wasn’t an army of zombies down there, what could they have possibly done against the villains in such a state? You have to bring a ton of ammo at the very least or some kind of plan. The heroes had neither and would have been doomed several times if they hadn’t kept getting saved. The whole film you are reminded of this as the heroes are just out of their depth for the majority of the movie.

Overall, The Death Cure isn’t a bad action film. I enjoyed it more than I thought I would and the series ends on a fairly good note. The ending is a little more hopeless than I would have liked and a certain death didn’t really need to happen since things were so bad already. It also didn’t help Thomas much either since at the very end he writes someone’s name down which basically proves his allegiance once more. If you want to see a film with a lot of action scenes then this is the place to go, but don’t expect it to be the kind of film that you will never forget.