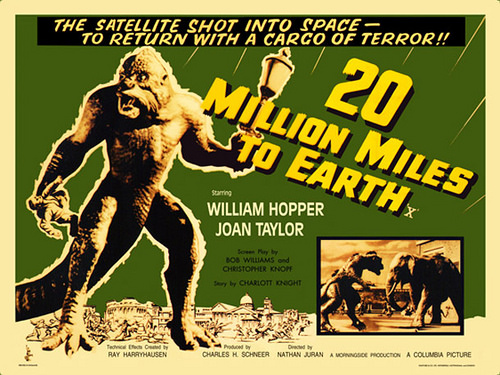 It’s time to look at a really old creature feature film. Unfortunately this isn’t one of the better ones and is in fact a particularly weak one. It resorts to bottom of the barrel tropes like animal violence and so the film quickly goes downhill. from there. You just can’t add in animal violence and expect to do well. Also, it doesn’t help that the monster didn’t really have a great design. He looked sort of like the gill man when he should have gone for a more authentic Godzilla design. I suppose you can’t win them all though.

The basic plot is that a group of local fishers are having a good time when they notice a rocket crash land into the water. They quickly head on over to investigate it and they are able to save one of the people inside. The others all died to a plague from Venus, but they still did take the time to take one of the animals over from there. Unfortunately a local boy named Pepe stole the animal and sold him (Keep in mind that the animal is till in egg form) to a local scientist for a pair of fake guns. The army doesn’t know this and is intent on finding the animal quickly. Turns out that they won’t have to look far though as the oxygen on Earth is having a peculiar effect on the creature and it is now growing very rapidly. If it keeps on going at this pace then thousands may perish. (Seems like hyperbole but one of the characters said so.)

It’s very by the books as far as the plot is concerned. The creature goes on a rampage and starts breaking stuff so the heroes have to put an end to it. The humans are all consumed by greed though and so they keep letting the creature get away. They want to contain it rather than destroy the beast because it can be useful for scientific study. This continues even when the monster is murdering people. One guy is literally getting bit to death while they just watch because they don’t want to hurt the monster. The big irony here is that bullets don’t work on the creature anyway so they were worried for nothing. It still makes you wonder about their principles though. The Italian government were the ones in the right here as the Americans just looked pretty bad the whole time. Even once they captured the beast to keep zapping him the whole time they let him break out and then a bunch of other people perished. So much for that eh?

Pepe is also a very annoying kid. In fact, he’s pretty much exactly what you expect whenever a kid shows up. They just tend to be rather annoying the whole time as they hide things from the grownups and keep trying for more and more money. He just holds everyone back. I’d say that the main fisher was probably the best character. He’s the only one who actually wanted to help the people from the crash while everyone else was too busy trying to escape. Certainly not the bravest thing to do in the middle of that. Of course, these characters aren’t here to be likable and they typically aren’t all that smart either.

Take Marisa, the doctor in training. She is in charge of looking after the 2 people from the crash, but one of them is unfortunately dying. The first guy, Calder quickly tries to wake up the second one to get answers, but she keeps telling him to leave the guy alone. Decent advice I guess, but since the guy is dying it isn’t like there is actually going to be a later. Then it makes sense to get all of the answers right away. She goes back and forth with Calder on this quite a lot until a random romance pops up and you wonder why once again romance was forced into a film for no real reason. It certainly didn’t add anything to the film and aside from a few very brief scenes it never actually goes anywhere. It’s just around for kicks.

The actual doctor isn’t very intelligent either. First he leaves the moving egg by itself as he goes to take a nap. Then after putting it in the cage he goes to sleep again and the monster has almost grown too large for his cage. What he does next is leave once again to go talk to Pepe and then decides to take a long trip to Rome. Did he really think that the monster would simply stop growing or that it would peacefully let them take it to Rome? Clearly this guy must be a self proclaimed doctor since I would expect him to be a lot smarter if his degree was actually legitimate.

The writing isn’t terrible, but it’s just nothing inspired. You could take some of the dialogue here and place it into almost any other monster film. It will work just fine because of how generic it is. Anyway, all of that could have been forgiven if not for the animal violence. As if once wasn’t bad enough they decide to go through with this twice. Perhaps it is the only way to show what a threat this monster is supposed to be, but picking on the humans would have been a better way of getting that across if you ask me.

Overall, I have to give this film a hard thumbs down. The creature isn’t very interesting and the characters are nothing special. Not only are they not quite as on the ball as a classic lead from other films, but their priorities are completely misplaced. The fact that they are okay with a bunch of people dying if it means that they get to study the monster just shows that these guys have no scruples. The whole situation makes it hard to root for the heroes, but you can’t root for the monster either so then what is there to do? Not much except to quickly shut off the movie. I’d certainly advise you to stick away from this one unless you want to get bored. If you need to see a film about a monster, go watch one of the Godzilla films. Those tend to deliver on the action front which this one could not. Also, who thought it would be a god idea to make the monster look really old and weak by giving him a mustache?