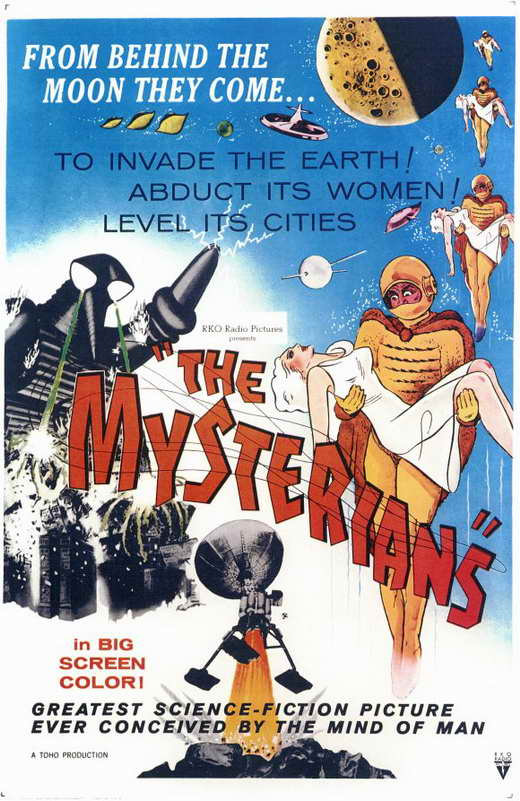 It’s time to look at a really old school Sci-Fi film. This one came out back in the Godzilla days during the late 50s. It’s even made by some of the same people from that title so you could be sure to expect quality confirmed. It plays out just like you would expect it to and is certainly an entertaining movie. You’re sure to enjoy it as the film is quite fast paced with a lot of fun dialogue.

The plot of the movie starts off by showing us some people not getting along too well at a parade/event of sorts. We don’t have time for this drama though as a large alien kaiju (Moguera) shows up to decimate the planet. The government manages to destroy this Kaiju as expected, but then aliens show up and say that this is the first of many. Unless we surrender land and people to them they will destroy us all. Naturally Earth won’t go down without a fight so we gather our tanks and planes as we prep a counter attack. It’s hype time!

I fortunately saw the dub version. The film is definitely played off as a comedy here as the actors have a lot of fun voicing the characters. You can tell that these guys had a lot of passion in the project as they would say things very directly. It was like a google translate version of the script. Everyone sounds a little off and naturally none of the voices seem to match, but that’s part of the film’s charm. It should have you cackling and chuckling throughout the entire movie. Even aside from the dub the movie plays out like a comedy at times with the monster getting destroyed simply by falling while on a bridge and then by trying to rise from the ground only for the rocket to squash him. It’s easy to poke fun at the robot’s design as well, but he tries very hard. I did like the robot and actually felt bad for him since the humans were simply too persistent. Moguera didn’t ask for this!

One issue with the film though is that they made the aliens a little too strong. As a result, it’s hard to believe it when thy actually lose to the humans at the end. They were shown to be able to spy on the humans and listen in to their conversations at will. How did they not notice when the humans built two death ray weapons (In the span of a day) and when they were transporting it over. Even once it arrived it should have been easy to shoot it down but they didn’t until it was too late. Apparently they can create flash floods at the push of a button so why didn’t they do so right away? At times you will just be wondering what they were thinking. I guess we have to assume that the aliens weren’t very smart and honestly that is probably a good bet, but even so they should have won this round.

The humans aren’t very interesting in comparison. The two heroines definitely look really bad here as they allow the villains to kidnap them without even yelling in protest. They don’t struggle and simply faint at the sight of the villains. It’s not as if the bad guys were grotesque aliens either. They looked like normal aliens in Power Ranger esque costumes. Nothing scary about that and the heroines could have easily escaped. Allowing themselves to be held hostage like that wasn’t very smart and it also made them a liability to the army. Well….lets be honest, the army barely cared and didn’t stop their assault, but that’s not the point. The heroines couldn’t really redeem themselves from that.

The main guy wasn’t bad though. At least he was smart enough to rush into the enemy base to blast them. The base shouldn’t have been so easy to breech but maybe the bad guys were so intent on building high tech weapons that they skipped on the basics like installing cameras and the like. If so that was a big mistake. I definitely didn’t like the traitor though. He acts as if he was tricked by the end, but I definitely don’t buy that. He simply wanted to make sure that he was on the winning side in the end and that’s not a great reason to switch sides. You can’t just betray the Human race and then decide to come back. It’s simply way too late by that point and there wasn’t much that the character could do to come back from that. It was simply all over for him by then.

I certainly enjoyed the government here though. Sure, they may not have had much of a plan at first as they just kept grabbing more tanks to fire at the enemy, but at least they didn’t even entertain the thought of co-operating with the aliens. The Aliens shot first so of course we have to respond in kind. America also looked really good here as they showed up and started taking names. We even came up with the plans for the death ray or at the very least the guy who brought the plans in certainly sounded American. Again, I have to give the dub credit for the voices here. They were hilarious throughout and show what a difference a good dub can do. It just makes the film flow that much better.

Overall, There really aren’t any weaknesses to point out in the film. The Mysterians manages to be solid all the way through. It’s a fun film with good pacing that really flies by. Moguera looks good while he is around. The design may not be scary or anything like that, but I’m always up for a giant robot to appear as it just makes the film more exciting. The ending leaves a little room for a sequel, but at this point we know that the aliens are doomed and they likely wouldn’t be able to even put up as good of a fight in a 2nd bout. They showed us their limits while we can reverse engineer their tech and get even better. Humanity wins once again. If you haven’t seen this film yet then I highly recommend doing so. You don’t want to miss out on the hype.