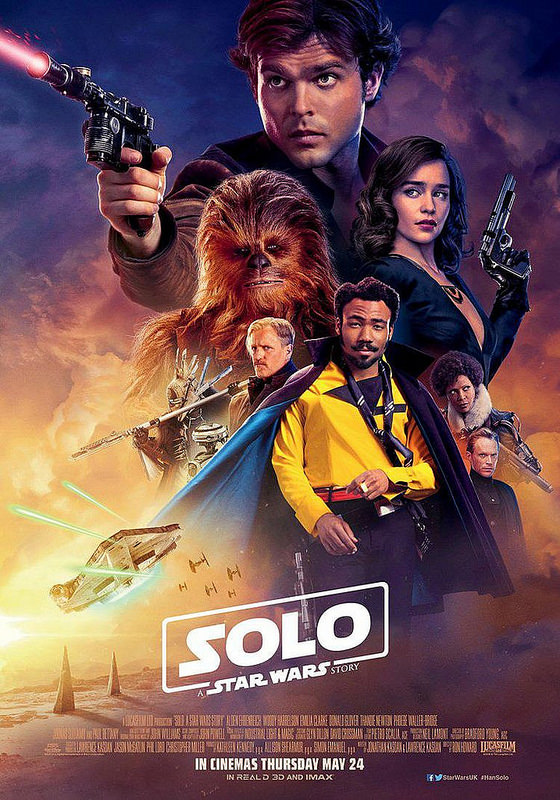 It’s time to look at Solo, A Star Wars Story. It’s certainly been getting quite a lot of mixed reception and a lower box office report than its creators had been hoping for, but it’s still a fairly good movie. It’s nothing great or even all that original but it executes the fairly basic plot well so that’s good enough for me. I was definitely hoping to see more Lightsabers and Force usage though.

The film starts off with Han and Qi’ra hanging out on a rather tough planet. The inhabitants all have to work for a large worm which is naturally no fun. Han decides to escape but Qi’ra hesitates too much and is left behind. Han swears to come back for her someday after he gets a ship so he can fly back to the planet. A few years pass and now he is close. He just has to help a few bandits steal some cargo to pay for the ride. Does he have what it takes to accomplish this?

Now, I know there were quite a few people who weren’t hyped for this film because Han’s voice seemed rather whiny and not quite like a young Harrison Ford would act. Well, I think he does a good job. The voice may be a little hard to take seriously for a while but as long as you don’t look at him as Ford and just focus on the character then it works well enough. Han gets a good role in this film and does certainly get his credit when it comes to his piloting skills. Han also doesn’t shy away from a fight or a game of cards and is always thinking up a plan. He is a well rounded character but one whose plans don’t work out as much as he would like. Often times I would argue that it isn’t really his fault when they fail though. I’d take him over Luke Skywalker any day and considering that he is an ordinary person with no Force abilities, Han deals a lot of damage in all of his fights. Even in his skirmish with Chewy he put up an impressive fight.

Then we have Beckett who is the leader of the rebels in this film. They aren’t to be confused with the official Rebels group. They are just people trying to make a difference for themselves as they grab lots of money. Beckett embodies this creed quite well as he doesn’t trust anyone and basically confirms that nobody should trust him either. All he cares about is the money and that part is rather impressive at least. He is very straightforward about what he is doing. Beckett also nearly finishes off Han when they first meet by calling his bluff.

Qi’ra is definitely an interesting character. You will probably have a good guess as to where her character arc will go as soon as she reappears as the lieutenant to the main villain. Good that she escaped in one piece of course, she must be pretty skilled at surviving. She’s a solid character who knows how to fight and that’s always a good ally to have. How you feel about her will certainly depend on what you think of her final choices. Again, they were expected so it doesn’t really hit you as hard as it otherwise would have, but it does hurt Qi’ra’s chances of being one of the best characters. A certain scene where she decides to confront someone with a sucker hit at the end did feel a little forced. The only reason this would make sense is if she really wanted to land the finishing blow herself for personal reasons as otherwise the guy was already going to lose. Her decisions seem to leave her in a pretty bad spot for the sequel as well so hopefully she has a plan for that.

Chewy gets a large role of course and he’s all right as per usual. He gets in a lot of roars and does his best to help out. He is around a lot but there isn’t really much to say about him besides the fact that he is the Chewy we all grew up with. I’m still waiting for his fight with Kylo Ren by the way. Of course we can’t forget about Lando. He has always been a big part of the Han mythos ever since he appeared in the original films and we learned that they had a history. Considering how their partnership plays out here I’m not too surprised that he wanted to get even with Han. It just turned out to be in a very serious way. Meanwhile the main villain is okay but strikes you as one of those guys who is basically all talk. Once it actually comes time to fight he goes down fairly quick. I would have liked for him to have looked a little more impressive during the big fight for sure. His weapon was pretty neat though so that was good.

The visual effects for the film are pretty good as you would expect. As this is an older film (in the timeline) there aren’t a lot of energy weapons being used so the film can’t show off its visuals as much as it could have. Still, what we did see was nice and smooth so I’d say that it was all on point. There isn’t much of a soundtrack though. It would have been nice if they could have used the tune from the first trailer. I thought that one was really solid.

I’d say that the writing was also pretty good. The comedy didn’t usually feel forced and the witty banter lived up to what it should be for a Han film. I won’t say that it was amazing but it was maybe a little better than expected and that’s always a good thing. It helps that the film had so many confident characters to play off of each other. Pretty much all of the characters talk a good game until put in their place.

Overall, Han is a solid film. It has a fun cast of characters and a lot of action to keep the pacing pretty tight. The plot evolves as the film goes on so it doesn’t stay stagnant. Really the only thing to say against it is that the movie can be very by the numbers. At times you can definitely imagine seeing scenes very similar to what you are watching and the plot twists are pretty telegraphed so there aren’t any real surprises. Well, as long as the film executed the plots well then it’s fine if we’ve seen them before and I think the film does a good job with that. I’d recommend checking it out at some point.