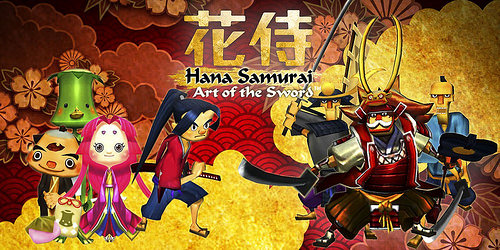 It’s time to look at another one of the MyNintendoReward games that I got recently. With this, the only one that I haven’t completed yet is the Legend of Zelda one which admittedly could be a while. It’s been a fun ride and these small games have been a nice break from the big ones. To say that this game is short would be an understatement, but since it was only 2-3 dollars that really isn’t bad. Naturally it isn’t quite as spectacular as Freedom Planet, but it’s a very unique game with a gimmick that works quite well.

The plot is fairly basic as the princess is kidnapped by some villains. The poor Kappa is the only one who remembers her getting kidnapped, but he isn’t a fighter so he waits until someone can back him up. Hundreds of years pass and no one is worthy, but finally a samurai shows up. The Kappa gives him petal powers which allow him to slice and dice the zombies. Finally, a hero has emerged. Still, will this kid really be able to stand up to the evil armies that are before him?

The gameplay is a reaction game which is the first of its kind that I’ve played. I don’t even know of any others. Basically you are in a 3D environment surrounded by enemies in each level. You have to wait for them to attack you and then you either dodge to the left/right or backwards. After you dodge you rush in and land a counter blow. If you time the dodge right you will get to strike back twice. However, if you attempt a second strike but didn’t dodge quickly enough then your sword will take damage instead. Mess up too many times and your sword will quickly become worthless. Sharpening the sword is pricey so if you aren’t sure about going for the 2nd strike just be satisfied with 1. The more you fight the enemies the more you will master the timing.

You can also buy kunai which you can use to preemptively attack with or a frog that distracts the enemy while you strike. The best items in the game are the rice balls and revive though since they can help back you up against the stronger enemies. There is also a gold cloth that works the same way as in Saint Seiya and it will give you absolute protection against any attack. It won’t last forever though so use it wisely. Each level typically consists of around 5 enemies, but the boss level on each land is comprised of 6-8 rooms with the same amount of enemies so bring a lot of health items for those.

The final boss is definitely very tough and the game jumps a few levels there. The game is never easy but that’s likely the only part where you will have serious trouble. I had to do some minor grinding to quickly stock up on enough gold to buy the maximum amount of every item. Even then I just barely won. If this doesn’t work out for you, try to complete a bunch of the side missions in town to increase the amount of health items that you can hold. This game is pretty fair in how it rewards repetition so as long as you keep playing you will definitely be able to vanquish the boss sooner or later.

The graphics aren’t the best, but they’re not bad. I just don’t care much for the main character’s design as it has the crushed nose look which hasn’t aged well. The villains look reasonable even if none of them are all that memorable. I do like the petal effects whenever you hit an opponent. I can’t really recall the soundtrack all that well either so you’re mainly in this for the gameplay. Of course, at the end of the day that’s the reason you’re playing any game right? The gameplay holds up quite well and makes the 3 hours fly by. I ended up playing the whole game in one sitting except for the final boss where I had to put the game down for a bit.

There isn’t much in the way of replay value though. You can beat the challenges as I mentioned, but that’s about it and it won’t take you very long at all. You also unlock some survival modes in the main menu which can be handy. They’re pretty simple tasks like beat 30-100 enemies and shouldn’t be too much of a challenge for you. Maybe the 100 one depending on how strong they allow your sword to be. Pro tip, upgrade your sword as soon as possible whenever you get the chance. It makes slicing through the armies a whole lot quicker and in general it is just more convenient. It’s a permanent upgrade so it’s better than buying something that will just go away. Don’t be afraid to lose either, whenever you fail the Kappa appears to help you earn some gold.

Make sure to go into town and save from time to time as well. I couldn’t figure out how to save the first time around so I made it to the castle and then ended up losing my progress. It won’t delete your data unless you attempt to go to the main menu, but that’s still not something you want to risk. Going into town is always handy in general as well. If you land a good combo without getting hit you can sell the combo to the local shop for some money as well. It’s a good way of rewarding your dodging skills.

Overall, Sakura Samurai was a pretty fun game. It’s definitely short, but at a rate of an hour per dollar that’s not bad at all. I’d recommend checking it out even if just to test your reflexes. Are they as sharp as you think they are? If so then this game will be a breeze, but if not then you could be in for some trouble. Now it’s going to be time to finally check out the critically acclaimed Sonic Mania. I’m ready for those fast paced levels!