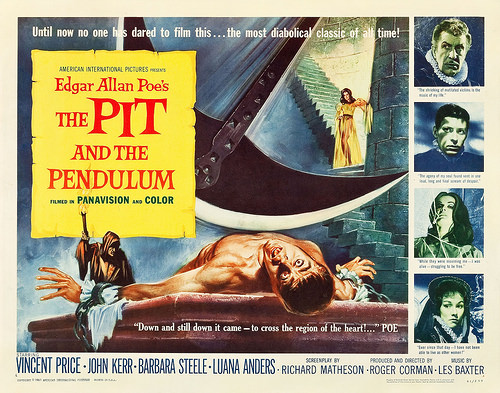 It’s time to look at one of those horror films where you know that someone’s gonna turn crazy from the get go. It takes place at an old castle and people have been mysteriously dying. You can’t really draw any other conclusion than this as a result right? The cast of characters is rather small, but as all of them are fairly annoying you begin to wish there were even fewer characters. It’s a pretty bad film that just stays very dreary throughout. You’ll be waiting for some life to be inserted into the film only to no avail.

The film starts off with Francis running to the mansion of Nicholas since he has heard that his sister died. Nicholas explains that she was sick, but forgets to get on the same page as Doctor Leon so the story is botched from the start. Francis quickly demands an explanation, but he isn’t getting one. That’s when Nicholas starts to go crazy and the cast hears a ghost from the great beyond. Is it possible that the sister still is in fact alive or is there something else at play here?

First off, the villains aren’t very smart here. So of course, you’ve got the “ghost.” Her role is to convince Nicholas that he is insane so his mind can break and she can then finish him off. The problem is that turning him insane would likely just make him even more dangerous so I don’t see how that would help. The odds of Nicholas just fainting and dying the way that they all envisioned just doesn’t seem all that likely. Even when the plan seems to work they don’t try finishing him off. Instead they decide to waste time gloating about it and rubbing their victory in his face. Naturally Nicholas doesn’t like this very much and retaliates.

Meanwhile you have Francis who is oblivious to all of this. He starts off by talking a big game, but very quickly you realize that this is all hot air. He is completely outmatched against the others. Nicholas takes him out with a single back hand. Sure, Francis was right to be skeptical so it’s good that he didn’t leave but at the same time he should have been more afraid to fight. What was his plan if Nicholas was the cruel murderer that Francis thought he might be? The lead can’t fight for beans so I think he should have thought this whole thing through a little more.

Then you’ve got the tragic backstory for Nicholas which just makes everyone look even worse. It turns out that his Uncle and Mother colluded against his father in secret so the guy murdered both of them. Now in the present this situation has gone full circle with other characters. That’s why you probably want to be careful when your house has an actual torture chamber inside of it. Definitely a very dark element and it’s used in both the flashback and the present day adventure. Even the twist ending opts to go for a more tragic route as opposed to being a hype one where the monster escapes. Someone is stuck in a cage with no foreseeable way out which is a pretty brutal way to go.

I suppose the script isn’t all that bad. The characters are all very theatrical and like to make sure that everyone knows what a tough journey they’ve had. All of the characters throw a lot of banter around and speak on each other’s behalf. You’re supposed to trust person B because A says so and vice versa. With nobody willing to tell the full truth you have to discern what is happening based on obvious plot devices and the subtext of what they’re saying. Unfortunately Francis isn’t quite ready for such a revelation.

While the character he is playing is no good, Vincent Price still does a good job of playing the same character he always does. He’s one of the most consistent actors from back in the day. I can’t say that I really follow too many actors/actresses because acting ability tends to look basically the same to me regardless of who it is, but in the modern day Tom Cruise is an example of a solid actor who always seems to be playing the same character and that’s why it works well. Likewise Vincent Price seemed to be that way in the old adventures. No matter what character he is playing you will likely recognize the guy almost immediately. It’s also the tip off to how you know he will turn evil by the end. That’s basically how it always goes.

Overall, I wouldn’t recommend checking this film out. If you want a grim tale from the olden days then this could work for you though. One aspect of these old films that makes the situations feel a lot more dangerous than modern ones is the fact that nobody is around to help. This film takes place in a very remote area where nobody lives for miles. You can’t hail a cab and there aren’t any cell phones either. Escape would be rather difficult at best and while Francis could still make a run for it, you can see why the situation is rather dire. It’s hard to recreate that sense of tension in a modern film although I’m sure they try their best. Now, if you want a much better horror film with plot twists and a character trying to find out the truth, check out the edited version of House instead. Now that one delivers on being quality entertainment.