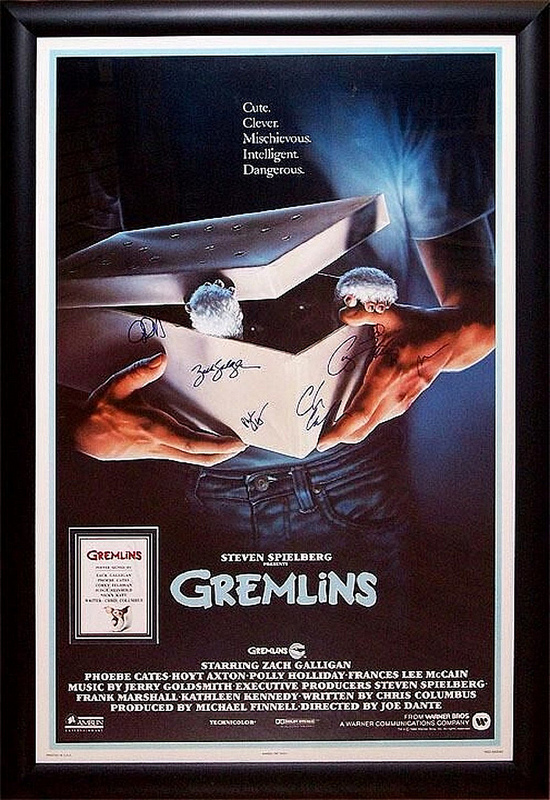 It’s time to look at a fairly old film which has become really well known. You’ll likely have heard of the Gremlins even if you haven’t seen the film before. Going into it you may think that this is going to be a pretty intense horror film, but it actually blends together some comedic aspects along with being part parody. It manages the blend fairly well which automatically makes it better than most horror films. It’s so convincing at being a horror movie that it’ll probably take you a while to really establish any kind of opinion on it, but by the end you’ll have to give it some thought. I doubt we’ll see another film blend two genres like this so smoothly again in the near future.

The film starts off with the best character, Randall trying to sell his crazy inventions to more people. The main problem he is having is that aside from none of his inventions working, the buyers just don’t seem interested. That’s when he finds a rare animal that is being kept in a shady shop in China Town. He buys it and brings the creature home. There are only 3 rules that must be kept with the creature. He must not make contact with water, he must not be fed after midnight, and he must not be exposed to bright lights or the sun as that can cause the monster to die. He gives Billy this bundle of responsibility, but can the kid handle it?

As I mentioned, Randall steals the show. He’s a perfect example of a comic relief character who is actually handled well. His humor scenes work quite well and he’s just a nice guy. Randall means well even if his actions don’t always lead to the positive outcomes that he was hoping for. Stuff happens right? He’s part of why the film was able to establish such a good balance. He keeps it from getting too dark or serious. The only downside is that in comparison the main characters just aren’t very good. Before that, we have the other parent who also looks great. Lynn ends up having to defend her house from multiple gremlins and she does a good job of it. She blends one, smashes another, and is basically taking names the whole time. This is where the parody elements really help the film. Typically you’d expect her to just be screaming and running away rather than fighting back. Here, Lynn isn’t playing around. She’s defending her house and doing a great job of it. She’s another scene stealer.

Then we have the actual lead, Billy. Billy can barely hold his own against one Gremlin so right away you know that he is pretty much doomed. He doesn’t do a good job of looking after Gizmo either. He constantly lets things happen to him. How can you mess up not letting Gizmo getting wet or keeping him near bright lights? Billy makes every mistake possible. Part of it can be blamed on his friend Pete who is super annoying the whole time, but you gotta be more responsible when you own mythical creatures like this.

Meanwhile you have Gizmo who is the most heroic of the gremlins, but naturally he is the weakest as well. It’s always an unfortunate trope as you’d like the heroic one to be able to defend himself right? Well, that just wasn’t the case this time. He’s not a bad character but I do admit that he would have been better if he had gotten to fight a little more. Mostly all he does he sit around and watch everyone else. Then we have the heroine, Kate who may not be quite as skilled as Lynn or Randall, but she does all right for herself. Choosing to serve the gremlins was definitely a smart move to extend her life. I didn’t get her whole blowing up at Christmas scene. I’m assuming it has to do with some kind of sob story so I’m glad the film didn’t really elaborate on it.

On that note, the romance with her and Billy was very weak. It doesn’t really have anything to do with anything and just felt rather tacked on. I think the film didn’t need it. What also hurts the film a bit is how the Gremlins go after the dog and Billy doesn’t do anything about it. It’s obvious who the culprit is as the film goes on but he doesn’t put the pieces together. I mean, the old lady is a slight suspect, but how could she pull this off without making a sound? Honestly, it should have been impossible for the Gremlins as well. It’s a pretty bad scene all in all, but at least the dog lived and made it through this film which helps a lot. That saved the film from getting a horrible score.

While the writing is fairly reasonable for the most part, I do think the film dropped the ball with the conspiracy guy. These kind of films love to have one guy who believes in aliens or monsters and is constantly acting crazy. You’d expect him to be prepared when the enemies finally show up since he called it from the start right? Instead he ends up panicking and dies in one of the worst ways possible. It’s a “funny” scene that ends up falling flat. They didn’t need to do him like that. The character could have contributed a lot. The soundtrack is definitely really good though. We get a lot of classic Christmas songs which is always what you want to listen to here. The classics have aged well and giving this film a Christmas backdrop is nice. It helps to make the film more memorable and gives it a nice backdrop.

Overall, Gremlins is an interesting film. It’s certainly not the kind of film you might expect going in. It’s just a very unique blend of horror and comedy. It works reasonably well but there are still enough weak points to probably keep you from coming back to this one. If you really want to see what this blend is like then it’s not a bad film to check out. Otherwise I’d suggest you watch something with a bit more flair and hype like RWBY. That one can pull off any genre and perfect it.