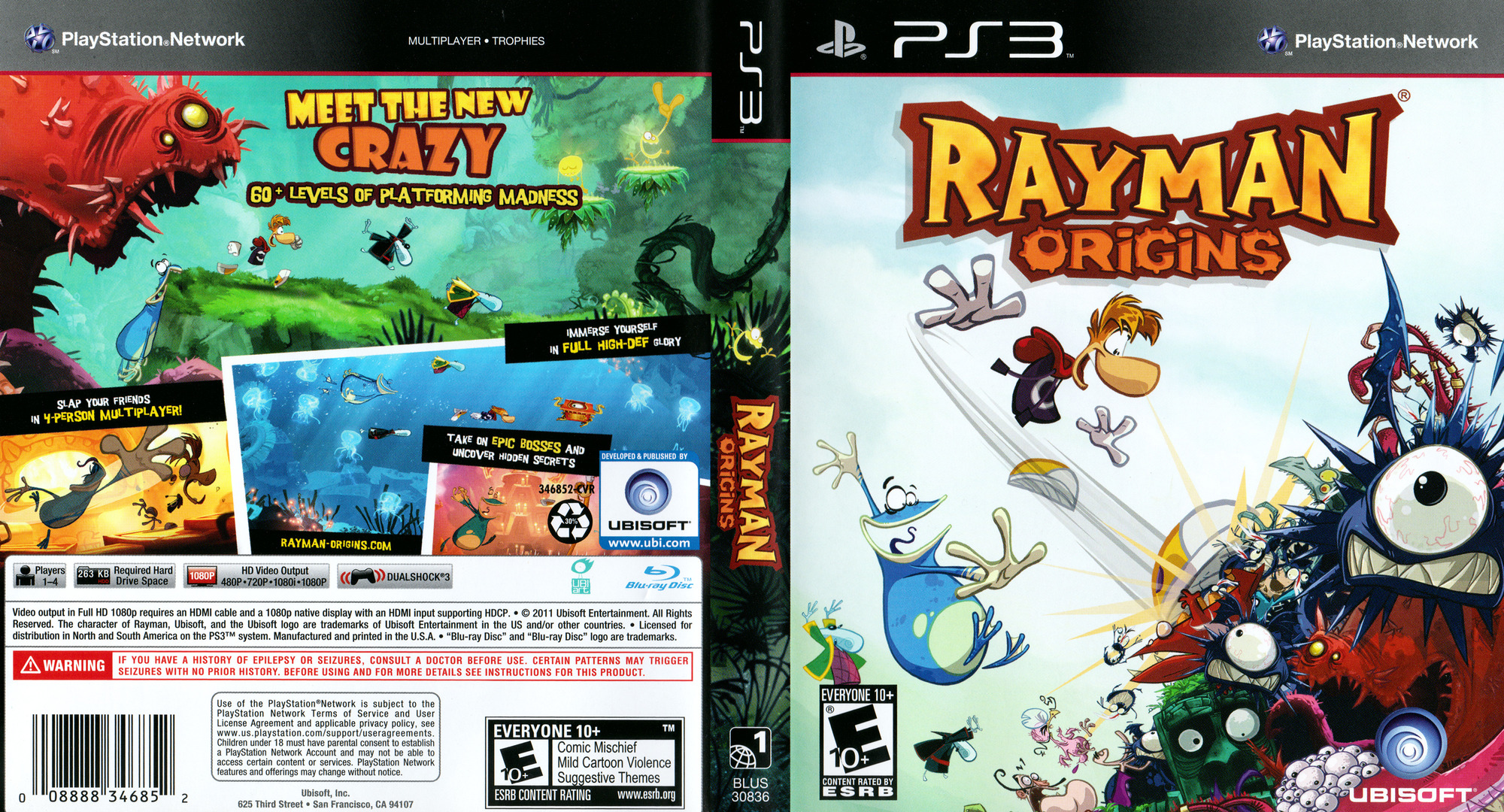 It’s time to look at one of the recent Rayman games. You could make a strong case that this is the one which finally put Rayman back on the map. His games had ceased for quite a bit, but this one made him mainstream again. Although, since the character has vanished once more we will need more games like this one. It’s a fun enough title. While lacking some of the charm of other side scrollers it is nonetheless a solid title for all fans of the genre.

The game starts off with Rayman and his friends lounging around on someone’s tree. The poor old lady can’t even think straight with how much noise they are making so she grabs her buddies and goes to confront Rayman. Rayman quickly turns this into a battle, but the senior citizens defeat him and his friends. Rayman must now save his friends and stop whatever heroic/evil plan the old lady has in store. The question you must ask yourself is if you should root for Rayman…or the old lady?

Naturally the gameplay is pretty fun. It’s your classic 2D platformer with a few unique items thrown in to match Rayman’s style. You can throw punches as well as hold for a charged hit. You can glide with your head that functions as a helicopter and in general have a lot of good movement options. You must get to the end of the level and free whatever fairies are trapped. However, just beating the levels will not be enough as you’ll quickly figure out.

There are a lot of roadblocks in the story that serve as a way to artificially extend the game. You need to collect a great number of spirit orbs in order to beat the game. This means that you must either replay most levels at least once or grab a bunch of them during the level. The latter is easier, however you may enjoy each level a little less with how much longer it takes to complete them. I never like when a game forces you to explore like this. You’re effectively penalized for being too good at clearing the levels. I will say that this does enact a heavy toll on the game and is one of the reasons why it falls short of the other platformers.

The other reason is that the story is just pretty bad. I’m talking Crash levels of bad. Rayman is actually not as likable as Crash which I’m shocked about. He’s quick to violence and the guy doesn’t seem to care about anyone other than himself. It really doesn’t help you think that he is even remotely heroic. I have my doubts after this game. You never get invested into the plot because it is virtually nonexistent and Rayman is too annoying to root for. The game also gets a little iffy with the character designs, adding some fanservice to the fairies that Rayman is saving. I can certainly say that this was not quite how I pictured Rayman to play out.

Still, as I mentioned the core gameplay is fun which is good. The levels are actually pretty solid. If you don’t care about reaching the ending and just play each level straight through you’ll enjoy them a lot more. They only drag on when you have to explore them. As a result, you’ll really look forward to the boss fights which show up during the final levels and the aerial stages. Those are always very short and are fun to get through. It’s the optimal experience if you ask me. Adding in a secondary gameplay style almost always works out for the best so Rayman did a good job there.

Another good thing Rayman did was add the unlimited lives feature. I feel as though this is immensely helpful for the levels given how long they are. You’ll probably die quite a few times so you’ll be glad that you don’t have to backtrack too far. That would get very old very quickly.

I thought the graphics were pretty good. The character designs are on point and the levels are good looking. It’s not as colorful as other games, but that’s likely intentional to get that slightly grittier. I gotta give the soundtrack a thumbs down though. I’m not sure what the game was going for with the various lyrical themes that showed up but they really didn’t mesh well with the game. It got worse whenever you would die since you’d have to hear the theme yet again.

As far as replay value goes, Rayman has quite a bit at its disposal. As you collect orbs new levels open up and you get more unlockables. You get new costumes, characters, etc. Naturally you can also go after all of the PS3 trophies to really try and put yourself at the top. As the story itself is already longer than many platformers this makes for a game with a great amount of content that will last for quite a while.

Overall, Rayman Origins is a mixed bag. As a game it fulfills it’s job of having quality gameplay but aside from that it ends up faltering in the home stretch. It’s not the most complete game so you just have to decide why you are playing it. If you are here for the gameplay then you are all set. If it’s for the overall experience then you may want to look elsewhere. Either way I’ll look forward to the next Rayman title as I feel like it should improve upon the flaws of this one.