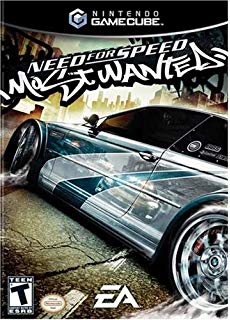 It’s time to look at the next Need For Speed game! One impressive thing about the franchise has always been how long each game is. This is another title that will potentially have you busy for 20+ hours and that’s no small feat. EA really put a lot of heart into this series back in the day so I’m curious if that will continue to be the case as I get close to the end of the game series. Most Wanted brings back all of the good elements from Underground 2 while improving on them. It’s the definitive NFS game so far.

The game starts with you heading into town for some good races. You find the top dog and challenge him to a race. Unfortunately he cheats and steals your car. You now have to rise back up to the top from the bottom with a random car. The problem is that your old car was the best in the world. Defeating that is going to be very difficult. There is one lady in your corner who defends you from the blacklist, but ultimately you’ll have to take down all of the racers if you want your dignity back. Are you ready to challenge these guys or is it curtains for you?

At its core the main gameplay of Most Wanted is naturally racing. You have to beat the other cars to the goal. If we go more in depth, the game has a consistent flow chart of how things work out. To challenge a member of the blacklist (There are 10 people on the blacklist) you have to meet certain criteria. This includes: Complete 6 races, 5 Milestones, and achieve a certain amount of bounty. The races are self explanatory, but there are various types like Drag, Circuit, Sprint, Speed Trap, Lap Knockout, and a Time Attack. They all have differing rules but as long as you drive carefully and quickly you’ll be okay. I personally like Sprint and Speed Trap the most. Just boost at the right times and you’ll be set.

Milestones involve escaping the police and doing some time trials. These start out easy but by the end of the game they are quite difficult. For example, one milestone is to run from the cops for 13 minutes without being caught. You can definitely imagine that this is not very easy. If your car tips over then it’s likely over. There’s also the spike traps that are left out which serve as one hit KO attacks against your car. If you’re hit then it’s all over. The bounty also naturally goes up by destroying cop cars or surviving for a while.

Once you’ve taken down 1 or 2 members of the blacklist you’ll be able to see how the game goes from there. While there aren’t many cutscenes here there are still a few more than in the last game. I imagine that the number should keep going up as you go through the series. The cop takedown videos are pretty fun when you lose although it would be nice if they were skippable. By the end you’ll have seen them many times so they aren’t quite as hype by then.

The graphics are definitely pretty nice. The fact that this game finally takes place in the daytime is cool as it makes for a great contrast during the gameplay. It’s like you’re finally back in a real city. The soundtrack is pretty similar to the last one. At least you are given the option to disable songs you don’t like which is very handy. That is already a pretty big game changer if you ask me. The soundtrack isn’t amazing, but the tempo of the songs certainly fit the races.

There’s a good amount of replay value here. Even after you have beaten the game there are a bunch of races to play. Perhaps not as much as you may think, but certainly enough. You can also just have fun running from the cops for hours. It’s an aspect of the game that won’t get old. Then you’ve also got Challenge Mode which has over 50 things to tackle there. The final challenge is sort of like the final mission in the game as the cops have everyone after you. Don’t think it’ll be easy to evade those guys. This time they’re playing for keeps.

One interesting thing is that you can max out your car before the final two members of the Blacklist show up. You will literally have a car that has all its stat figures maxed out. That means that the final two cars aren’t even worth equipping as they are actually slower than yours. It’s an interesting decision and it was almost a bit odd. Still, I guess it shows that you just have to keep your driving at a high level because at the end they’ll all be matching you. I do recommend trying for the pink slips when you beat the rivals on the blacklist since getting a car is worth the odds.

Also, one thing I liked about the final blacklist race is how the villain appears to cheat which fits with his character. He’ll suddenly vanish from the map and appear in front of you or take a shortcut that you don’t have access to. He beat me once using these cheap tricks. It was cool though because I can’t think of a time a game has done that before and it just makes sense. He cheated the first time, why wouldn’t he do so now? The villain’s name was Razor I believe and while he’s definitely not even a good villain, I did like the voice. It oozed confidence from start to finish.

Overall, Need For Speed Most Wanted is definitely a great title. If you haven’t played a Need For Speed game then I’d say you should certainly start with this one. It’s got the huge hub world from Underground 2, but without the style point grinding. The story also takes more of a focus as you can choose to just do the story battles and go from there. The other games forced you to do a bunch of extra races. Next up is Carbon and I’m interested in seeing how that game is set up. It looks like it might be a bit shorter than these last few, but it’s still Need For Speed so we’ll see about that.