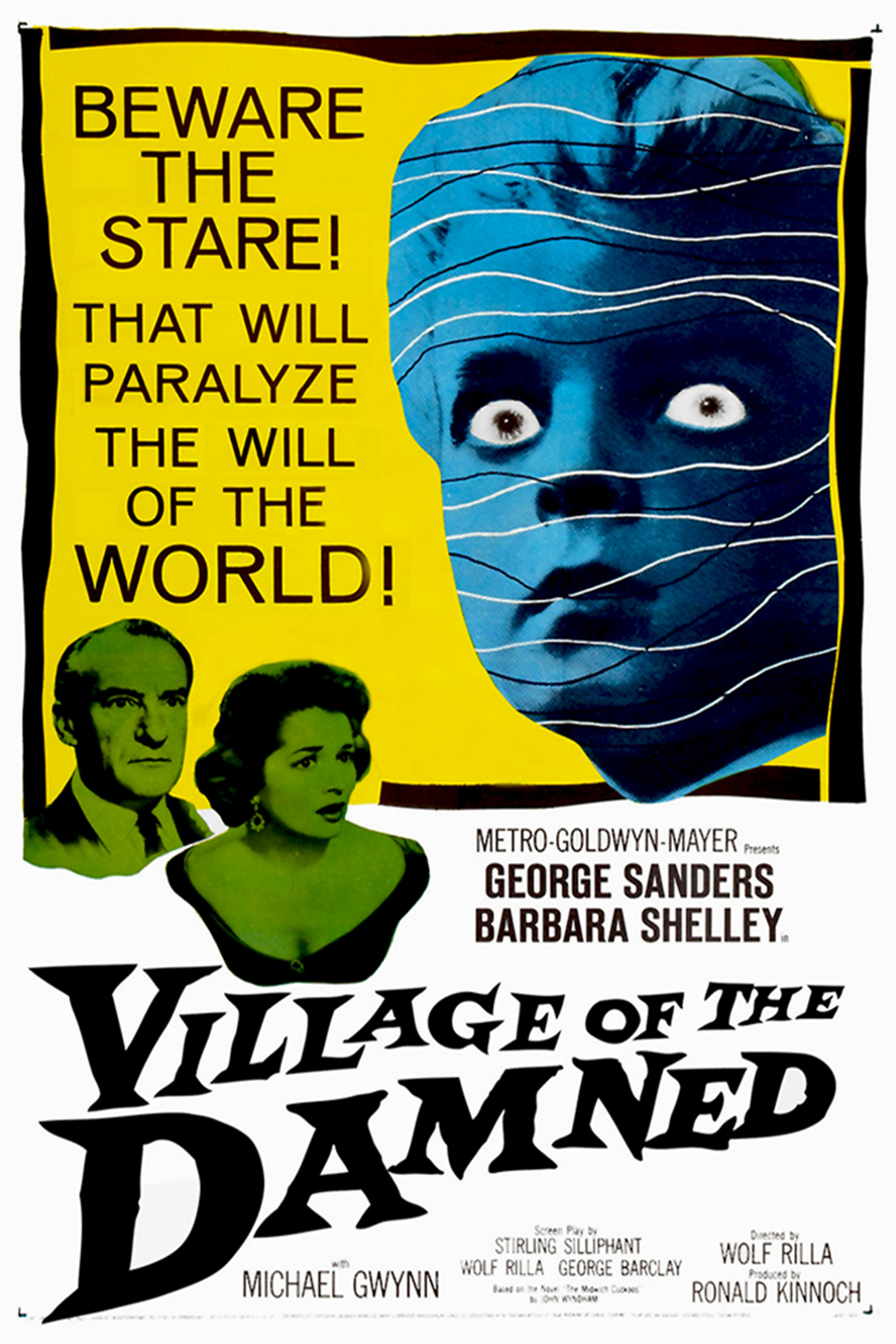 It’s time to look at an old film with a rather intense name. Apologies to my younger readers, but given the context it’s not really used as a swear word. Regardless I won’t be mentioning the title for the rest of the review so you only need to see it once! Whenever you’ve got the word “Village” in the title you have to be a little weary because those movies do not have a great track record. While this one is certainly a step up from that infamous film, I can’t say that it really succeeds either. When it comes to horror films, it’s hard to say what the best formula is. It’s either throwing in aliens, monsters, or ghosts. I can tell you now that possession and normal humans are some of the worst horror moves. What’s one other kind that competes with those? Evil kids.

The film starts off with everyone in a random village being knocked unconscious and nobody is able to enter the area. Eventually this odd occurrence ends and everyone wakes up. All seems normal for a while, but two months later a bunch of people get pregnant and the demon kids are born into the world. They look like normal kids, but have slight differences in appearance like their hair and claws. They also have the ability to take control of someone’s mind and can even affect multiple people at once. The government thinks they must be destroyed but Gordon believes that they can be used for good. One of these kids was born to him and Anthea which gives him extra motivation to convert them. Alas, they seem to be getting worse and worse instead of better.

Gordon’s plan may not have gone well, but I would still argue that he had the right idea in part at least. These kids are still just kids so even if they have super powers you can’t just destroy them right away. Locking up or quarantining them made sense though so the government agent had some good points. It’s not as if you can stop them with power or hope to protect everyone, but leaving them in the middle of a village with a ton of innocent kids and civilians is really not the best way to go about this. Gordon was too hopeful. It’s not bad to be optimistic, but you can’t be putting everyone else in danger like that. The only life you should risk is your own when it comes to ideas like this.

Anthea is probably the most tragic character here because she’s trying to just make things as normal as possible and David isn’t making that possible. The kids don’t even try to fit in. From the start they act antagonistically. I suppose they want to rule the world and all, but shouldn’t they not be putting so much attention on themselves? David later admits that they caused too much of a commotion but they could have easily gone under the radar. I suspect they are not quite as intelligent as they would have you believe. After all, they have lost to the humans in every major battle so far. With their abilities the kids should never lose.

Here’s why kids don’t work as main villains anymore than they would work as main characters. For starters, you can’t have a proper fight with them. It’s not like you can punch a kid after all. So all of the scenes with them just involve the kids staring the adults into submission until they destroy themselves. Causing the characters to commit suicide is the main trick that the kids use and it’s not exciting to watch in the slightest. I also always have a hard time buying into the whole hypnosis thing so I’m just over here shaking my head while this is all going on. These guys need to work on their will power so they don’t get wrecked so easily.

I suppose by the end of the film it’s safe to say that these are really just aliens who are taking the form of kids. It’s definitely a unique plot even if the payoff isn’t amazing. I actually prefer the first half as the characters struggle to get into the town and have to figure out a way around the dead zone. I expected that most of the film would revolve around this effect turning off and on with the humans getting closer each time. Instead we are introduced to the kid plot which throws in some tension as some of the parents reject these alien beings, but I’d prefer we have focused on the aliens.

The writing here is pretty solid. It’s got that classic feel to it with every character feigning politeness even when they are being aggressive. The pacing of the film is good as well and it doesn’t drag on. At most the second half might be a little grating just because by that point you realize that Gordon is completely in denial and everyone is dying as a result. You know that the townsfolk will fail even though there was a whole group of them. It may have actually been more interesting to have had the government take the win here rather than letting Gordon get all the credit.

At first I thought Alan was going to be the main character while Gordon would be the second in command. The film did a good job of pulling a bait and switch here as Alan quickly goes from being the lead to one of the less intelligent side characters. He doesn’t even realize Gordon’s final plan despite the character trying to be as clear as possible without tipping anyone off. I guess the guy’s army training just wasn’t quite enough for him to be ready for such mindgames. Gordon’s plan was quite solid though. Keeping your mind busy on something else to avoid the telepathic probes is exactly the kind of trick you should be using here.

Overall, this film does a good job of being an atmospheric horror title. There are no jump scares nor does the film resort to violence to try and get a quick scream. The animals don’t even end up dying because fortunately they were only put to sleep. Even the dog managed to live which is amazing because I feared the worst as soon as he showed up. Still, I can’t give the film a higher score because the kids just aren’t very interesting and their scenes can’t hold their own. It’s really up to the grownups to make the film and they do a good job. If you like the idea of alien kids among us then you should definitely check this out. Otherwise, why are you watching this one?