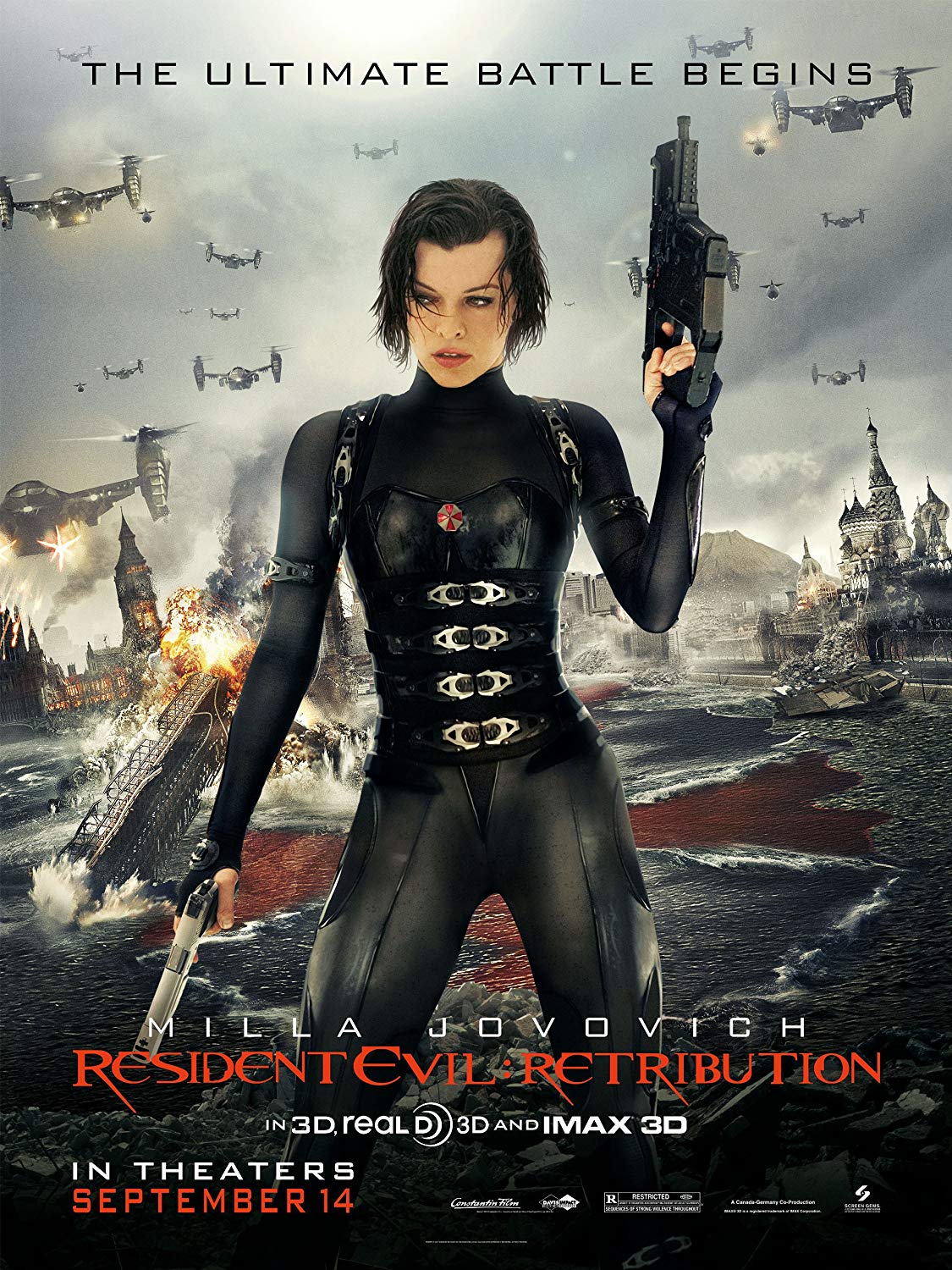 It’s been quite a while, but it’s time to finally rejoin the Resident Evil series and continue with Alice’s adventure. The movie series has always been a very interesting one. It’s got a dynamite soundtrack and the special effects are on point. It’s also got a very interesting plot and handles the whole zombie angle way better than most other titles. It ends up faltering due to the excessive violence and fanservice running around, but at least you have a decent time while watching it. This film is no exception so you’ll have a lot of fun as the film goes on even if it can’t escape some of the usual issues.

The movie starts off by giving us a brief recap of the last few films. If you managed to forget parts then this will help a bit, but honestly I don’t see how you could forget since the films are too exciting for that. To this day I have to admit that Resident Evil consistently has the best cliffhangers out of any live action movie. They always end with a bang and that keeps you going until the next movie. The credits play before that through a slow motion scene that goes backwards before then playing it again at normal speed. It’s an interesting way to start the film, but I think the scene does go on for a little too long. It’s always interesting to see how the scenes look before they’re at normal speed though.

So last time Jill and the other members of Umbrella stormed the boat and attacked the heroes. Alice was captured during this offensive and is being held at Umbrella’s most dangerous prison. The Red Queen has decided that now is the time to break Alice. Fortunately she is given an escape option thanks to Wesker. He hacked the system and sent in his top agent Ada to help Alice get out. She doesn’t trust him, but she’ll surely die if she stays so she goes along with this plan. The prison is huge with different areas spanning multiple city blocks and each area is infested with zombies that she has met in previous films as well as normal ones. Alice will really have to work hard to get out of here. Meanwhile a squad has also been sent in to rescue Alice from the outside. They’ll have to get halfway through the compound to rescue her, but breaking in is just as difficult as breaking out. Neither side is going to have an easy time here.

Well, lets tackle the film’s weak points first. For starters this is still a film that is focused on using a ton of gratuitous violence as the heroes mow down the zombies. Someone gets drilled with a spinning disc until they’re murdered, others are sliced and diced, and everyone else is eaten alive or shot down. There’s constant violence here to be sure. I feel like it’s less violent than the last one or two, but it’s been a while so it may just feel that way. As always the film does make sure to include one fanservice scene at the very beginning as the villains try to break Alice, but it’s not quite as forced as in the last films. It’s still one of the weakest scenes in the film though and I guess the Red Queen is getting emotional at this point because there really doesn’t seem to be much of a point in kidnapping Alice in the first place. At the very least they aren’t running tests or doing any of the usual maneuvers that you would expect.

The supporting characters are also pretty forgettable. Anyone who isn’t one of the main 4 characters is quickly shoved to the side. It’s hard to care about any of the group members who came to save Alice despite at least one of them possibly being a character from an older film. The main guy is Leon and he doesn’t leave much of an impact. They all just start to blend together and feel like cannon fodder. Ultimately they don’t seem all that important. At least the main cast is solid though.

As always Alice is a great character. She’s certainly kept her fighting skills over the years and is always ready for the next fight. Her character is exactly how I would like Samus to be portrayed if we ever get a Metroid film. To say that Alice is one of the best film heroines of all time would not be an understatement. At the moment I cannot think of anyone who would be above her. She’s just that good and has been consistently solid throughout all of the films in the series. This may still be her best portrayal yet as she is both a solid soldier as well as a compassionate mother figure in this movie. I’m expecting great things from her in the next film as well.

Wesker gets to appear a little here. His role is large but his screen time isn’t although that should change in the next film. There’s a lot of ways the film can finish up his character arc so I look forward to seeing what they choose. He is incredibly overpowered to the point where it seems like he could end the zombie apocalypse on his own. I suppose it isn’t that easy, but it does feel that way. Alice will have to watch out in the next film although thanks to a twist in the ending she may be ready for him.

Jill spends most of the film under mind control but makes for a terrific main villain. Her fighting skills are the real deal and when you mix in her hand to hand expertise she really becomes a serious threat. Her costume is very accurate to the games and she is a scene stealer. Then you have Ada who also gets a lot of hype for her fighting abilities, but isn’t quite as impressive as Jill. I don’t think there is ever a question of who would win if these two were to fight each other. There’s also a kid who tags along for a good chunk of the film. Her plot is fairly sad, but Alice does what she can to help. The kid can actually listen to orders so she is considerably better than most others. Her Mom also did good as she didn’t panic too much when the zombies came and actually fought quite a bit.

Continuing with the film’s excellent execution, it really pulls off the zombie invasion in this small town. It’s an intense set of scenes with a lot of good attention to detail as you see people trying to fight off the zombies in the background. I definitely don’t think heading back into a house is a good idea in the zombie apocalypse, but in the spur of the moment I suppose there isn’t much else you can do. The whole thing is pretty thrilling and it’s like seeing an AU of what it could have been.

As always the soundtrack is dynamite as well. It really feels like something out of a video game and I think that’s part of why these films shine so much. The structure and feel is like a video game and the films aren’t afraid to embrace that aspect. The costumes are on point as well and the pacing is also solid. It’s still a little hard to describe what really makes these films pop, but I think at the end of the day it’s that sci-fi works really well for any medium. It’s why Astral Chain looked so great and why these films are so engaging. Sci-Fi is just excellent.

I also need to point out that the fight scenes here are excellent. Jill vs Alice is certainly the highlight. It’s the kind of fight where it’s one sided, but close enough for both fighters to still be throwing attacks around if that makes sense. It’s just a lot of solid back and forth. Then you have the other fight of Rain taking on the side characters and that plays out as you would expect. She’s simply too powerful and Alice has a tough time there. Throwing in these super soldiers really takes Resident Evil to the next level. If there’s any complaint with this climax it is that the resolution to Jill vs Alice doesn’t make any sense. Stopping the tech should not be so easy because if it was then the fight should not have lasted so long. There would be many opportunities to do what Alice did at the end a little earlier in the fight. It’s also poor design on the villains part.

I didn’t talk much about Rain earlier, but she’s a solid villain. Her good self was also fun and you’ll feel bad for her. She did try her best to help out but is the definition of a red shirt. She was never going to last very long in this brutal world. Rain never faltered and that’s the important thing. Evil Rain is just as solid and really gave the heroes a hard time.

As I mentioned these films are known for their awesome endings and this film does its best to top them all. I’m not sure if I’ll give it the top spot over the original, but it definitely comes close with the heroes preparing for their final battle. It really feels like we have finally made it to the end of the road. It’s hard to see how the heroes will be able to overcome such crazy odds but with Alice and Wesker they have a chance. The tough part will be trying to keep the two from destroying each other in the meantime. The ending also gives a lot of hope for more awesome fights in the next film only this time we may finally be back to the more super hero-esque adventures.

Overall, Resident Evil: Retribution brings the nonstop action that you are hoping to see. It’s a very solid film on all the fundamentals and is definitely the best title in the series. It improves on all the previous ones and does its best to get over some of the negatives. It’s still dug its grave with the amount of over the top violence here, but the upwards slope this film brings the series to is definitely a good thing. If you like horror films or just want a good sci-fi thriller then you definitely need to check this out. So long as you are cool with the violence you can expect to have a home run hit on your side. Hopefully the next and last film in the series can give us a proper ending.