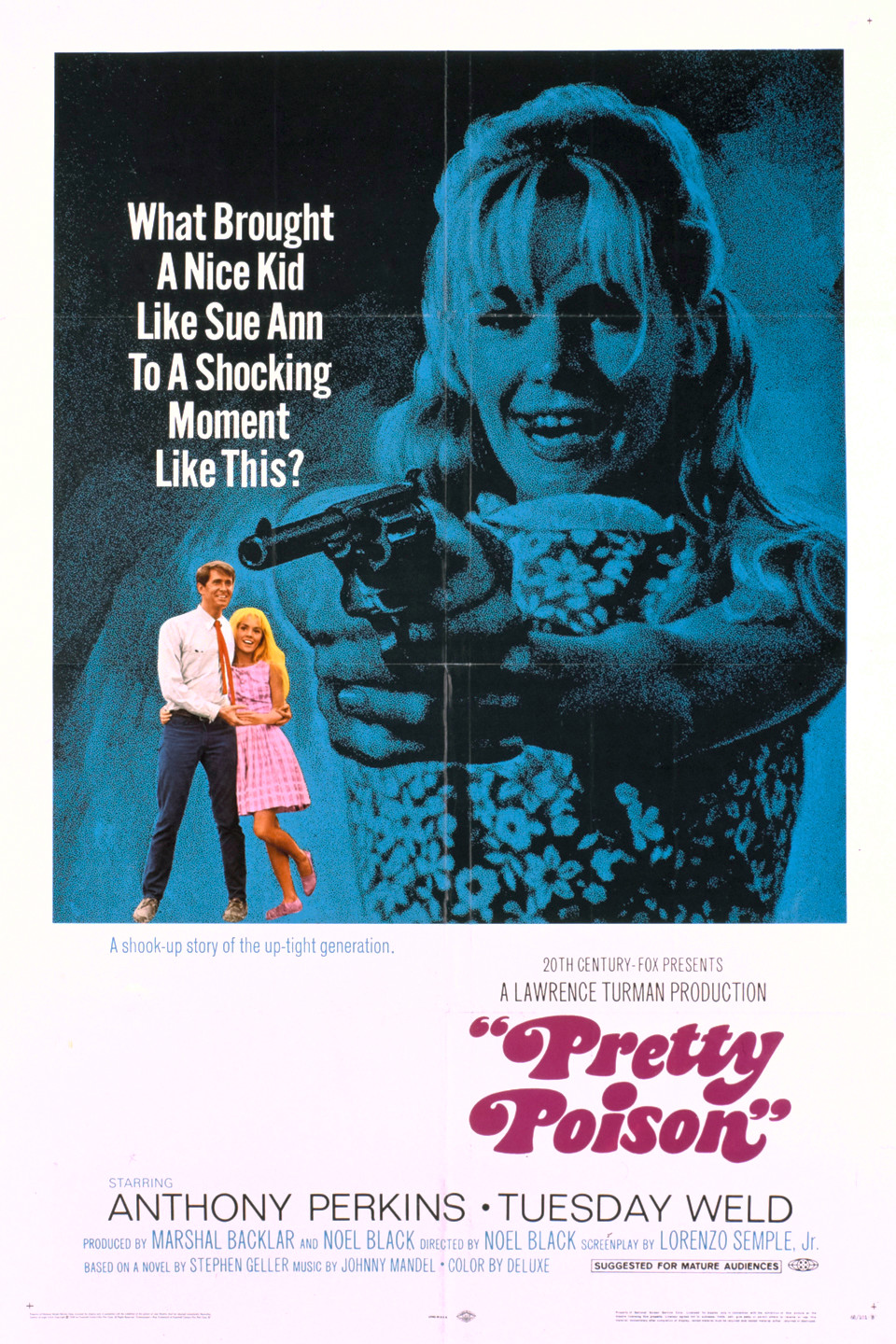 It’s time to look at the film known as Pretty Poison. I actually did review this film once, but my whole review got deleted so this is version 2. I’m not sure exactly why it didn’t save, I’m thinking somehow I lost signal so the transfer didn’t go through or it got archived somehow. It’s happened to me in the past, but it’s been a while. Usually I also keep a copy offline just in case until I see it go through, but I had seen it in my gmail so I thought it went through. I dunno, tech can be a little weird sometimes. Regardless, reviewing the same thing twice was an interesting exercise.

The film starts off with Dennis meeting with his probation officer Morton. Morton lets him know that Dennis now has a job at a chemical company and so he should be good to go. Just keep in touch for a while. Dennis already seems a little crazy but agrees and then quickly stops making contact. Once in the area he meets up with a girl named Sue Ann and decides to recruit her to his cause.

Dennis is convinced that he is a foreign agent meant to shut down various companies in the US. He tells Sue Ann that he is from the CIA though and his first act of terrorism will be to sabotage the chemical plant where he works. Yes…the main character is literally a terrorist and targeting the place where he works at almost right after joining makes it all so obvious that you have to wonder what his plan is. Most likely he doesn’t have a plan, but things take a turn for the worse when it turns out that Sue Ann is even worse than he is. She just wants to watch the world burn and is ready to murder as many as it takes.

This movie has a lot wrong with it. One of the primary factors here is the weak main cast. First you’ve got Dennis who is just a terrible lead. The guy’s not heroic in the slightest and his delusional fantasies turn him into a complete villain. There’s nobody to root for here and his final decisions in the movie make no sense. The final scenes have him refusing to state his side of the story and he doesn’t co-operate with the cops at all. It’s some misguided passion to let others die as he says that the poison was pretty. It’s a metaphor for how nobody will understand how evil this person is until they’re stung, but then he is simply accepting the fact that there will be more victims. He’s not helping anyone so that just makes him part of the problem. After all if you aren’t stopping evil then you are aiding it. You’re never given the impression that he was ever trying to help the heroes either which just makes things even worse.

Then you have the main villain Sue Ann who definitely isn’t a likable character either. The whole point of her character is that she is even worse than Dennis after all so this likely won’t come as any kind of real surprise. It’s just how it is and the romance plot between her and Dennis was also doomed from the start. It’s not a well developed romance with both of them using each other the whole time. Dennis is really slow on the uptake here.

Then you’ve got Morton who was the parole officer, but never really did a good job of reigning in Dennis. From the start Dennis breaks the laws and his probation so I would have liked for Morton to have gone after him a little more. You gotta do something when the rebellion is so open the way that it was here. If Dennis had at least made the effort to look like he was going to change then that’s different. Instead he basically just threatens Morton and somehow the guy decides to look the other way. I dare say that this makes him at least indirectly responsible for some of the damage that happens later on.

There’s really nothing good about this film and it’s a crawl from start to finish. A good chunk of this film is really just about showing how delusional Dennis is and how out of his depth he is as well. It’s all played seriously so it’s not even a comedic plot where you can mock Dennis for not being able to keep up the act once Sue Ann really starts testing him. She really figures him out pretty early on if you ask me. The ending of the film can be interpreted a few different ways. Sue Ann definitely isn’t going to stop taking people down, but the latest guy seems obviously shady as well. I can see them both bumping each other off so it’ll probably all depend on who goes out first.

Ideally the cops will have figured all of this out by then though. While Sue Ann got rid of a lot of the evidence there should still be some things that pop up eventually. Her finger prints would be all over the bodies, even the guard who was drowned unless the water gets rid of it. I don’t know exactly how all that works, but I feel like some evidence should still remain. If not….well I guess the town is basically doomed.

Overall, Pretty Poison is definitely one of those films that you will want to completely sidestep. It’s a pretty dark film that doesn’t have good pacing and gives you nobody to root for. The romance is one of the worst that I’ve seen in quite a while. You’ll be checked out early on and the title will become pretty obvious near the start so you don’t even have that to keep you engaged. I think what could have helped the film would have been if Dennis actually wasn’t insane and aliens ended up arriving near the middle of the film, but I suppose this would be a very different kind of movie at that point.