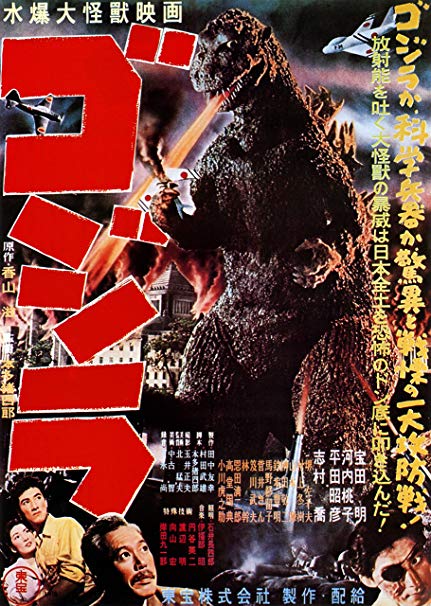 It’s time to take a look at the original Godzilla film. I saw this one a very long time ago, but it’s time to dive back in. This time I saw it subbed and while the dub is always the definitive version for me, it’s interesting to see the original version. Godzilla is a solid film for sure and it’s for good reason that the series got so popular. You can’t really have a definitive experience without a second monster for him to fight so this is still one of the weakest films in the series, but a good launching point nevertheless. After all, this works to introduce the character.

The film starts off with a few boats burning up at sea. No matter how many the government sends they all end up meeting the same fate. Eventually it turns out that this is due to a new monster known as Godzilla. He may very well be the most fearsome monster of all time and the government is unsure what to do against him. All conventional weaponry has failed and the only chance for success may lie with Dr. Serizawa. He has a secret weapon which can seal the victory, but has decided to never use it. His only mistake was in confiding in someone else. Placing trust like that is always an incredible risk if you really don’t want something to get out. The problem for him is that deep down he wanted someone to know about his invention so it was inevitable I suppose.

The best part of the movie is naturally Godzilla himself. His roar is definitely a lot more villainous here compared to in the later Showa films where it just sounds a little more heroic. Here he sounds like a wild beast who can snap at any second. While the effects aren’t quite at the level they would be at in later films, it’s still nice to see him smashing the buildings and laying the world to flames. He is an intimidating Kaiju and the film is a reminder that Godzilla is not the kind of monster you want to make an enemy out of. You do have to decide who you root for here of course, the humans or Godzilla. It’s tough because Godzilla doesn’t have any malice towards the humans, but he is still destroying millions. Meanwhile the humans have started the fight, but now you have to count on them to finish it in order to save everyone. I’m on team Godzilla, but I can understand why one would want to pick humanity.

There are 3 main characters. First is Ogata who is not having the best last few days. First he is unable to get the approval of Emiko’s father since they get into a heated debate about Godzilla. Then he takes a head injury and is put into an awkward spot with Serizawa. I wasn’t a big fan of his. While Emiko’s father may not have been very reasonable, Ogata handled the whole situation pretty horribly if he really wanted the guy’s approval. They don’t have to agree on the Godzilla issue, but he didn’t have to bring it up. Meanwhile we have Emiko who I also didn’t like.

Her friendship with Serizawa is exploited by everyone as she is unfortunately not someone who deals well with pressure. A reporter asks her to set up a meeting with the doctor and she does even though Serizawa didn’t want to see the guy. Then he tells her the secret of the Oxygen Destroyer and she spills it very quickly. She should have just said that she would be unable to keep the secret as that would be preferable to just telling Ogata the whole thing. Keep in mind that Godzilla already existed at this point so she should have known that eventually there would be more casualties. Emiko’s reaction to the weapon is also really overblown as she shrieks and almost faints from witnessing a glimpse of it.

Part of why she is my least favorite character here is because of these reactions. After she betrays Serizawa she is quick to ask him to forgive her for doing this but it doesn’t feel sincere since she doesn’t regret asking. Then Serizawa has to fight Ogata off when the latter tries to steal the research. Serizawa was really the only reasonable main character here and he ultimately paid the price for it. There are points to be made against him like not inventing such a terrible weapon in the first place. His only real defense seemed to be that he couldn’t help himself and naturally that isn’t the greatest defense to be used. I suppose it’s better than nothing, but that’s not great. I’d also argue that he just shouldn’t have told Emiko in the first place.

The soundtrack is definitely top notch. A lot of the themes that we hear here will be used in future Godzilla films. It’s an array of songs that have really withstood the test of time. The heroic theme, the Godzilla theme, etc. They’re true staples and especially for a film as early as the 50s this was extremely rare. Most movies in this era either didn’t have a soundtrack or it was incredibly forgettable. I’m impressed with how much detail was in these tracks.

Overall, Godzilla is definitely a pretty fun film. It’s certainly one of the original creature feature films and you can never get tired of seeing Godzilla show up. He had more screen time than I had remembered and we even did get to see some of his Atomic Breath. If you haven’t seen this film yet then I’d recommend changing that. It’s got good action and pacing. While the cast of characters is pretty weak, they don’t hold the movie back. You also have the government characters and the reporters who hold on to their ideals throughout. The side characters all hold their own and everyone is fighting in what they believe are the best interests of Japan. None of them are acting selfishly so you at least have to give them some credit there.