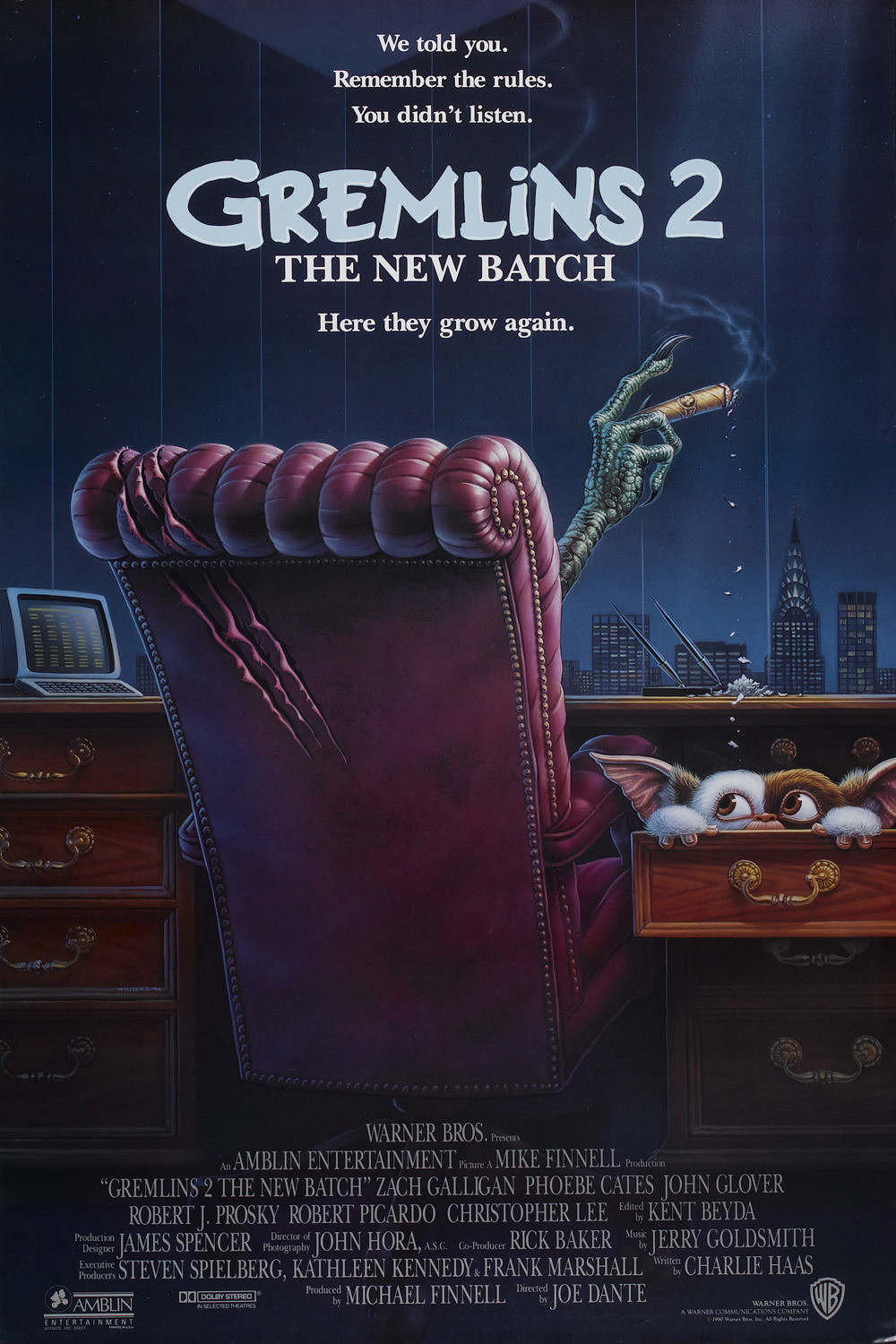 It’s time to look at a sequel to the classic Gremlins film. This one dials the craziness up as the film breaks the third wall and the monsters gain various super forms. It’s an improvement over the first in some ways but I wouldn’t say it’s enough to throw it onto solid territory. At this rate a third film could be the one to do it though.

The film starts off with corporate heading over to the store where the gremlin is being held and they attempt to buy out the building. The owner refuses since he has decided to never sell the place. Corporate is never denied though and the old man soon dies of old age. Interestingly the film plays it straight as if there was no foul play involved. The owner was simply too old. One thing leads to another and after corporate captures Gizmo he ends up being exposed to water and his various clones quickly take over the building. Billy figures that since he has prior experience with the Gremlins that he is the best person to stop them. Can he pull this off or is the city already doomed?

It always makes for a good plot when corporate is involved because I like to see how they handle an alien invasion. Gizmo isn’t technically an alien but with how the plot plays out he may as well be. The company actually did pretty good here. They definitely lost the first round but once the big boss Daniel showed up they were in good hands. From the first scene Daniel was in I had a good feeling about his character. He seems like the kind of guy who made it to the top through his own abilities and he is quick on the uptake. Even with no heads up or survival training he was able to take down one of the powered up Gremlins. That’s not bad. Then he helped execute the final plan really well and even had a Batman type secret exit. He was constantly working hard and showing why he deserved to get the position.

Billy’s direct supervisor’s supervisor definitely doesn’t fare even half as well. Not only is he shaken up and overwhelmed right from the start but then one of the gremlins even forces him into a fake wedding. Clearly the creatures aren’t respecting him as an actual threat which is pretty sad for the guy. He had some potential since he looked good during the opening scene where he negotiates with the shop owner. From there his character fell down though. Then you’ve got Billy’s supervisor whose plot is pretty unnecessary. She decides to try and seduce Billy since he is on the track to success and he puts up very half hearted resistance the whole time. This plot is dropped pretty quickly later on and at the end of the day it just didn’t matter much.

As for the main heroine, Kate isn’t bad, but definitely not as pro-active as some other characters. She doesn’t handle the gremlin in her house too well and doesn’t really get to lay on the damage to the remaining ones. At least she is upset about Billy being so weak willed though. Then you’ve got Billy who makes the wrong choices consistently. You have to give him points for being predictable, but why would you leave Gizmo alone at any point? He should have taken him home straight away. It’s good that he rescued him, but that’s not going to help if you leave him in the villain base.

Gizmo gets a big role of course. He is still the mascot of the series after all. Unfortunately he is really just used as a punching bag by the other characters the whole time. He’s the original so you would expect him to be able to fight but that isn’t the case. The others get cool super forms and such while Gizmo is stuck trying to load a flame arrow to help fight them off. He gets a good moment at the end, but the rest of the film is him losing every round so it only helps a little bit.

The other Gremlins are interesting although their super forms range from actually being fairly threatening to just being grotesque. The fruit ones can be a little hard to look at, but the bat one was pretty cool. Their super forms don’t seem to actually amp up their physical abilities all that much so they’re really here for style points. One of the gremlins ends up getting super intelligence so he tries to give us some reasons for why the Gremlins are attacking. Ultimately it really just boils down to the fact that they want a society and have to eliminate the humans.

On one hand I like that Gremlins 2 does amp up the crazy factor. Having the Looney Tunes actually get a scene was pretty interesting. It’s always nice to see Daffy steal the show. Then there is one point where we break the third wall and a wrestler shows up to tell the theater to continue playing the film. That was definitely out of left field and it’s a bold moment that really pays off. Of course with a lot of extra humor like this there will be moments that don’t work like the wedding sub plot. You have to take the good with the bad in a title like this.

While the film doesn’t take itself seriously all that much, there are a few intense scenes here like one of the Gremlins being shoved inside a blender which leads to a violent death. It’s all rainbow colored so I suppose that’s why it wouldn’t ultimately rate too high as a violent moment, but it can definitely be a bit disturbing. The pacing isn’t bad for the most part. It may drag on just a bit towards the second half, but all in all you should be in for a decent ride.

Overall, Gremlins 2 can be fun. It’s hard to put my finger on it though, but the film doesn’t have any real replay value. It’s not the kind of movie I would ever need to watch a second time. I think it just isn’t a strong enough movie for a second viewing, but on your initial watch it will be entertaining enough for you to make it to the end. Ideally if we get a third film we’ll get to see corporate return. Without them this movie really would have worked so you gotta have them return. Even seeing the employees fighting the Gremlins in the background was pretty fun. I always like a good background gag, they’re subtle but work pretty well.