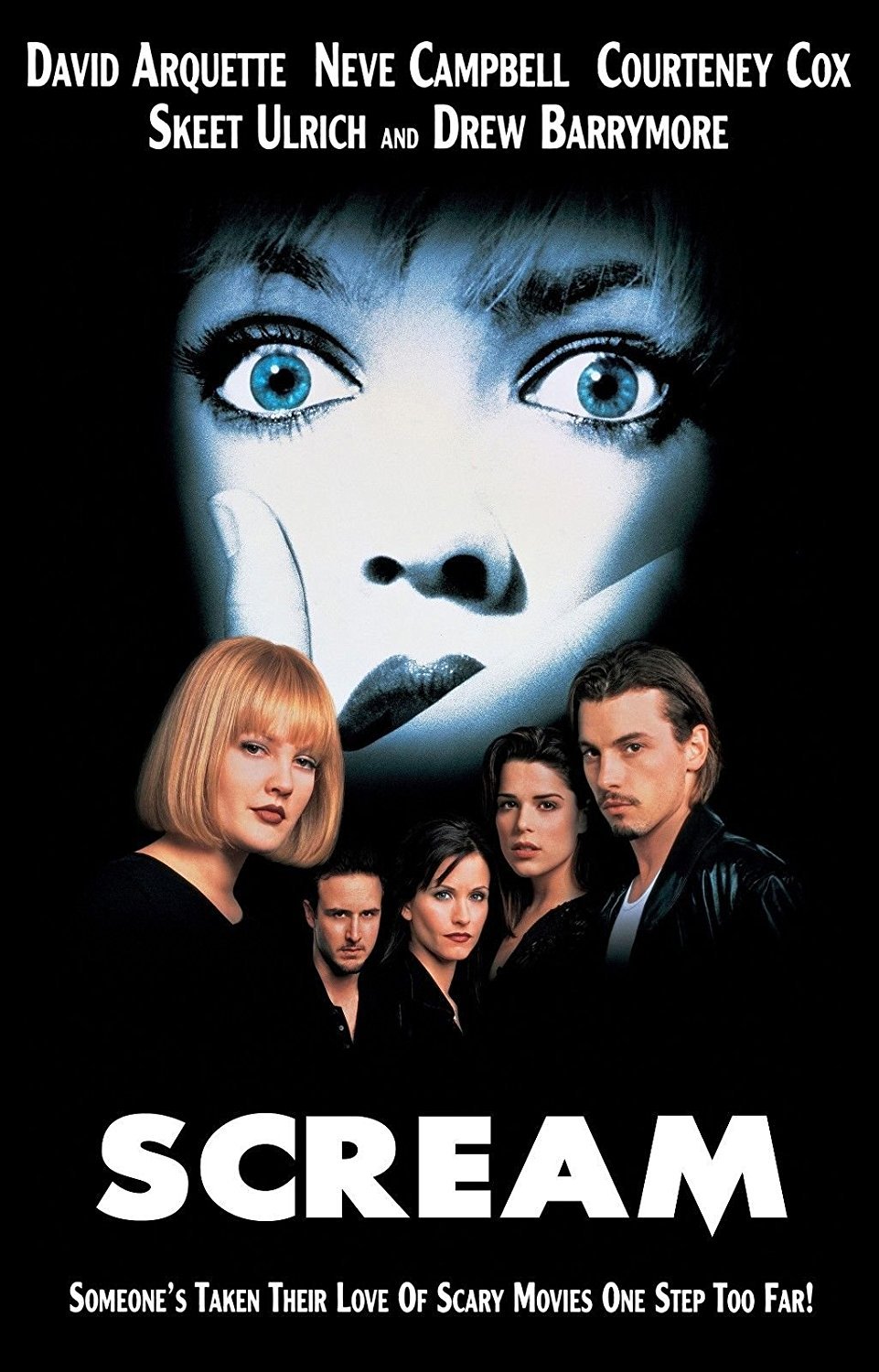 It’s time to look at one of the most iconic horror franchises of all time. I’m talking about Scream with good ole Ghostface. I think it’s fair to say that you expect a certain kind of film when you watch Scream and it delivers. This is exactly what you would expect in pretty much all aspects. It isn’t my kind of film and the crazy excessive violence dooms it from the start, but at least the film tries to differentiate itself a bit during the journey like with the great soundtrack. It’s not a film I could ever recommend but if you like slashers then this isn’t a bad one to check out.

The movie starts off with Ghostface showing up to someone’s house and murdering her. We then cut to the next day as the whole town is on red alert. School is still on for now, but security has been ramped up. Nobody knows who the killer is, but there’s a good chance he is somewhere in the town. Sidney is particularly distressed because almost a year ago her mother was also murdered in a grisly way. Sidney quickly finds out that she is the next target as Ghostface calls her and makes his intent known. She will need to find some way to stop him before she becomes the star of her own horror movie.

So lets talk about what makes Scream a little different from the average horror movie. For starters we have a great soundtrack here. I dare say that it’s probably the best horror soundtrack I’ve ever heard. It’s certainly the best slasher one I’ve experienced. We get constant rock music and the music doesn’t bother being subtle as it really intensifies during all of the big scenes. I dare say that this was poking fun at the usual horror films as well which is always a good idea if you ask me. The music really takes you to the next level.

Then there is the fact that the film wastes absolutely no time. Ghostface appears almost immediately in the film instead of showing up way later. Horror films are no stranger to having a quick beginning, but it is really rare that the guy shows up in costume so early on. It’s like having a mini movie at the beginning of the actual movie which was clever. Then even when he confronts Sidney that happens a lot sooner than I had thought. The guy shows up quite a lot and takes many attempts at the heroes but it works really well. Even as he loses the guy still makes his presence known.

It’s also nice to see the characters actually putting up a good fight against this guy. They really give him a beating and knock him down several times as the adventure goes on. It’s not something you would typically see in a movie like this one and while they are ultimately doomed it still works out very well. It delays the inevitable but that’s fine. Having a quality fight scene is always a good idea. If anything you will just wonder why the heroes never try finishing this guy off and turn their backs to him. Some of these characters seem like they would win in a fist fight so they just should have pressed the advantage.

Then the film goes into the usual slasher tropes which takes us back to square 1. For starters the film is incredibly violent. Everyone dies as painfully as possible and in particular there is a lot of blood in how they die. I dare say that the film is poking a little fun here too as everyone takes multiple stabs to go down instead of the usual just 1 hit like in most other films. It’s not like they ever really manage to do much between stabs though but with that and the face of the mask I dunno. It feels like a bit of a parody here too even if these are serious scenes.

We also can’t forget the script which isn’t very good as the teenagers all like to yell and panic as much as possible. Most of them seem to love the violence and are borderline rooting for the murderer as they have a lot of fun with the concept. The fact that they wear the costume later on is quite telling as well. Everyone in this town is intense though like the principal as well as he really threatens the students with death for this. You can tell how his character arc is going to end right from the start. The characters are portrayed to be as unlikable as possible which is always unfortunate.

Finally Ghostface himself has motives that are pretty sad all around. The film goes out of its way to make Sidney’s mother’s death as tragic as possible. Why can’t the villain just be a mass murderer and not a super sketchy individual on top of that? Such a character is already completely unlikable, it’s not necessary to go any further than that. Between that and him getting beaten up by just about every character in the book, things don’t look very good for Ghostface.

As for the main character, I can’t say that I’m a big fan of Sidney. Sidney is trying to come to terms with all of these dark events and does a reasonable job of this. Unfortunately the only supportive person in this is Tatum. Everyone else are really just here to make the situation tougher. Unfortunately she caves in to peer pressure with Billy at the end and loses sight of her priorities. It’s really not the best time to completely be messing around…especially when it’s not even her house. She has good confidence even when fighting Ghostface so that’s good. She’s generally very determined and knows how to throw a punch. Sidney may not be amazing, but she gets the job done.

Meanwhile we have Billy who is the super shady, suspect boyfriend. The film makes him look as creepy as possible even to the point where he appears out of nowhere right after Ghostface leaves. You have to decide if this makes him an actual suspect or if this is another trope that the film is mocking. Either way there is no reason to like him as the guy has no respect for anyone else and keeps pressuring Sidney into going further despite her reservations.

The friends are just as bad if not worse aside from Tatum. Tatum is Sidney’s only real friend and is at least a nice person who will stand by her. Tatum really gets the short end of the stick in this film as things never go well for the best friend. You have to give her a lot of credit for really trying to help Sidney and she was always quick on the defense. Tatum also puts up a good fight in her scene.

Then we’ve got Dewey who is a young cop that is trying to be taken seriously in the town. Unfortunately this is not going over very well as everyone keeps on thinking on him as the little kid they once knew. In their defense, Dewey doesn’t do a lot to garner respect as he still enjoys ice cream and gets bossed around by Tatum. When it’s crunch time he ultimately folds and that’s really all you need to know about the character. He also puts romance before the job and that’s never a good thing for a cop or any other position.

Finally there is Gale. She’s a bold reporter who gets on everyone’s bad side, but always manages to get a scoop. She doesn’t get along with Sidney because she believes that the lead tagged the wrong person for the gas chamber. She intends to blast this case wide open and will do whatever it takes towards this goal. It makes for a good subplot but I don’t think the execution was completely on point. Honestly she should have been the one to shoot Ghostface at the end. I’d say that she earned it considering how much work she put in and the fact that she was tracking this case for over 10 years. It just felt like she got the shaft here. Still a fun character though even if she is using her wiles to manipulate Dewey. It’s more his fault for falling for her tactics. She’s just winning.

Overall, Scream will grab your attention and it really does end up being a smarter slasher film than most. It’s not going to win an Oscar or anything like that, but it feels more realistic than some others. There aren’t a lot of moments where you think “The character should have done this instead of that” They actually make logical choices for the most part (Crawling into the garage door was a bad move) but it’s just too late for them anyway. The main takeaway here is that you’ve gotta try and fight off the villain when you have the edge instead of running. This film’s way too violent until you’re of age so be warned. If you do want to see a slasher though, you can’t do much better than this one.