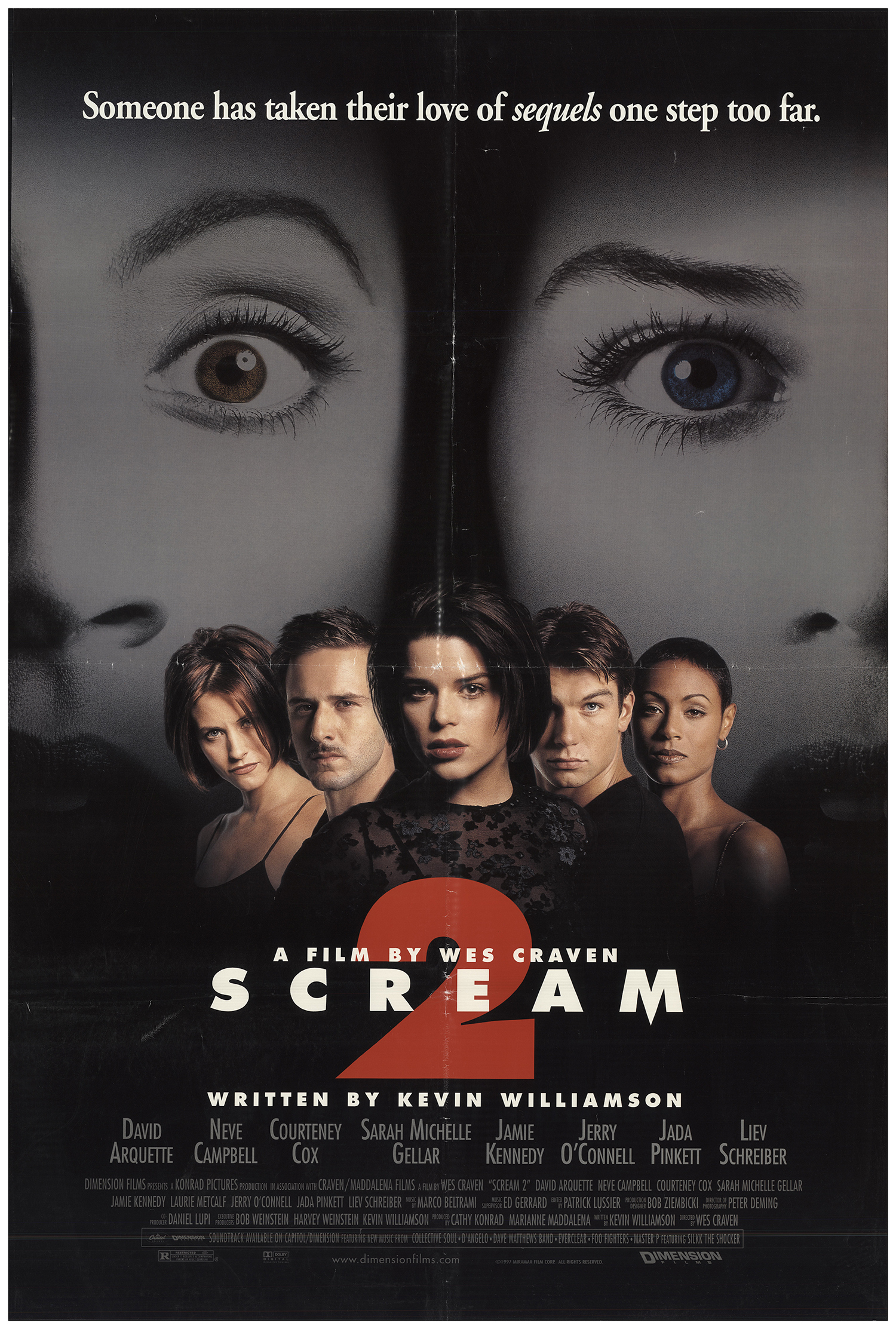 It’s time to look at Scream 2 which brings back pretty much everyone for another round with the murderer. Last time a few of the heroes got away so we’ll see if they are so lucky this time. This sequel is a little better than the first one but of course a slasher film can only get so good.

The film starts with a scene where the characters are watching a screening of Stab, which is a film adaption of the first movie. This theater decided to try something a little extreme as everyone brought in a fake knife and a mask. This results in the villain sneaking in and claiming his first 2 villains. Then we cut to the main part of town where Sidney is still dealing with the aftermath of what happened last time. People prank call her all the time and with the movie out it’s gotten worse. Still, she has managed to mostly be at peace. This all changes when news of the murders gets out and it seems like the new one wants to repeat everything from the first film. Can Sidney manage to survive this encounter?

Let’s go through the basics real quick. The film is extremely violent as you would expect from this series.  Everyone dies pretty brutally and the body count is fairly high so you can expect a lot of scenes like this consistently during the movie. There’s not really much the movie can do to rise up with this level so with the score doomed pretty early on the question becomes whether or not the movie can at least be entertaining in the meantime. After all, you can have a 1-2 star film that will at least give you some fun scenes like the Resident Evil series or you’ll get some that are just a slog to get through from start to finish like the Exorcist. This one is closer to Resident Evil.

One thing that does help the series is the fact that the cast returns from the original film. Establishing some kind of continuity like this is pretty rare for any horror series so it’s impressive that Scream pulled this off. It may ultimately not feel like much of a silver lining but at the end of the day I’ll take what I can get with these. It at least helps to balance all of the tragic elements like the opening scene where everything that can go wrong for the victim does. Everyone was super oblivious there. It’s probably the saddest scene in the film especially because these characters really had no heads up and almost nothing to do with anything. Their names simply were on the list.

The script naturally still has a lot of characters talking like sailors, but at least we still do get some fun lines here and there. The characters all talk really tough at times and they’re pretty aware of what’s going on which is good. The back-up camera man for example correctly realizes that he’s probably in a lot of danger since Gale has decided to get mixed in with this dangerous plot once again. The movie loving character also talks really tough to the villain although he probably shouldn’t have gotten so close to the abandoned van in the middle of the road. That’s definitely a rookie mistake.

Sidney is back as the lead and she is definitely a solid character. She has gotten better as the films progress. At the time of writing this review I have also seen Scream 3 and that is her best portrayal but lets not get ahead of ourselves. After the events of the first film she is naturally pretty wary of being around people. When the murders start escalating again she wants to do something about it, but everyone else just tells her to calm down. It’s hard to say what the best course of action is for her since either way there’s no guarantee she will be safe. How I see it the murderer is after her either way so it makes sense for her to get involved in the case. At least she’ll be around the cops which should help in theory at least.

Meanwhile Dewey and Gale are back to bickering as usual. There banter with each other can always be fun, but then it’s cheesy how quickly they get back together again. The music is perfect for their first meeting in each of the installments though. I dare say that Dewey gets weaker with each film, but at least I do like the fact that he is always trying to help out. Surprisingly he never gets scared off and considering what he’s been through that is impressive.

Likewise Gale doesn’t let anything get in the way of her story. She does get a little sloppy in the climax here, but the fact that she always seems to make it to the climax is a sign of her persistence as well. Gale is basically the Lois Lane of the series and does whatever she has to in order to get the scoop. She’s one of the best characters in these films. Meanwhile the guy she saved from execution shows up as well. Cotton is pretty upset as Sidney due to being framed and seems rather unbalanced throughout the film to the point where he even threatens her. He just seems really shady and I wouldn’t trust him if I were the other characters. He seems to be reasonably tough though and that’s always handy. As long as he is not the murderer then he can possibly be helpful.

There are some minor characters like Sidney’s roommate and her new boyfriend, but neither one of them are terribly important unless of course one of them is the culprit. For now I’m going to count Ghostface as his own character so I don’t blow the mystery. I will say that this Ghostface is a huge improvement over the one in the first film. For starters he isn’t getting kicked around the curb by every person he tries to attack. This one actually wins most of his fights. While his goals are just as delusional as the first guy, at least they aren’t as deplorable. This is definitely relatively speaking though since murder is murder. He gives a crazy speech about how the court case would go down and that could be an interesting movie in itself. There are other important characters in the climax, but there’s not much more I can say on that here without major spoilers.

While the soundtrack doesn’t quite match up to the first film’s dynamite tunes, this one still sounds pretty good. They just don’t seem to have some of the really solid rock themes from the first film and that’s too bad since it would have been cool to grab those. It’s still got more music than most films have by default though which is always good. The effects are also pretty solid. Ghostface’s simple design actually works well and makes him appear more menacing than most other horror icons.

One area where the film doesn’t standout as much as the first film is in the victims fighting back. As I mentioned in the original film they all landed a lot of hits while this time it’s more like a classic horror villain. It does make Ghostface more of a serious villain but it also becomes slightly less realistic as just about anyone would at least try to put up a fight. The film actually captures a lot of elements better than most like with how it takes multiple stabs to take anyone down in these films while in others people magically die after a single hit. You expect people to put up a fight between hits but that doesn’t really happen this time.

While a horror trope is that the villain is around every corner, the films have been pretty good with keeping it mostly realistic here. There is one scene you will question though as the guy somehow escapes a car and runs all the way around the street to get within stabbing range of the characters and doesn’t make a sound. Keep in mind that this is a deserted block in the middle of the night so there are no sounds that could drown out his. I dunno about you guys but when I leave a car it’s pretty noisy just due to how cars are. The guy was also just in a car crash so he’s pretty wounded. Honestly the characters should have quickly finished him off while he was knocked out, but I suppose it’s hard to just straight up murder someone like that if you’ve never done it before. The best friend was right (as always) in saying that they should have just gotten out of there. Anything is better than heading back into stab range.

Overall, Scream 2 is an improvement over the first film. I’d say that the villain is an improvement and the writing is better as well. The characters aren’t quite as crude and that’s probably because only the good characters survived the first film. At the same time the film couldn’t really improve on the score. The violence is still way over the top with Ghostface messing with most of the villains from the get go and as the viewer you know that they have no chance. I don’t think there’s really much of a way around that with these slasher films. At least realistically since they could just have the characters die off screen but then it would basically switch genres. If you liked the first Scream then I’d recommend checking this one out. It feels like a direct continuation and it does improve upon the first film in almost every way.