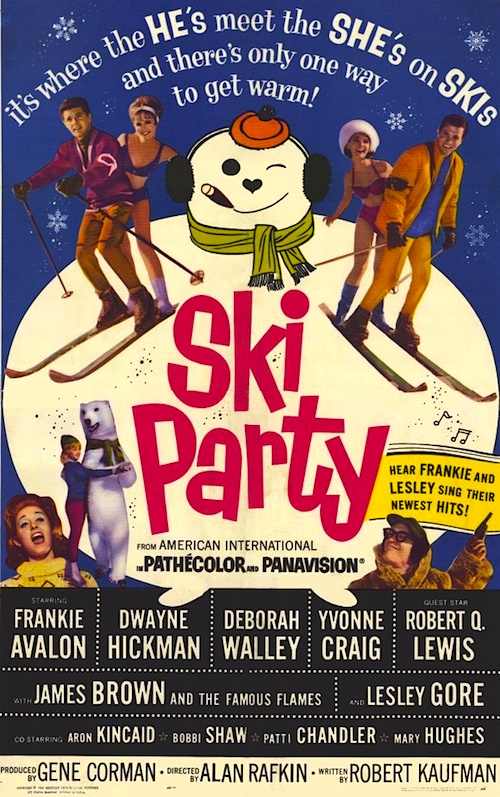 I’ve seen most of the old beach party films from this crew so I may as well see their skiing version as well right? It’s certainly not much better than the rest and makes all of the same mistakes. The characters may not be at the beach but they certainly dress as if they are. I would make the case that there is a little less fanservice here than in the beach versions, but I’m not invested enough into the series to do so. You certainly wouldn’t catch me defending this film. Well, let’s take a look at what we got.

The film starts off with Todd and Craig being down in the dumps because they are still single. They joined a bunch of sport programs but it was no use. Then they notice that Freddie is the star of the party and everyone is only interested in him. Perhaps the trick is that he is always skiing. The two leads quickly decide to go to the next big skiing event and are determined that this will put them on the radar. Will such a shallow plan really work or will the film test our intelligence by continuing to make the plans crazier and crazier?

There are a lot of issues here so it’s always hard to know where to start. I guess we should tackle the romance first. Romance was always a hard genre for films to really pin down and that can be especially true for this one. Part of the reason why the film kicks off is because both of the girls don’t seem to love the two guys straight away. They did go with them on two dates though so this is more about the main characters not being very patient. They want to immediately go further in the relationship while the girls are waiting. The guys are Freddie all the time and that really warps their expectations. You also can’t feel any sympathy for them because they would cheat on the two girls in a heartbeat. We have many scenes where they try to go after other girls so there is absolutely no loyalty here. They’ll simply go after the first one who accepts them.

They also use rather underhanded methods in order to complete their mission. One such tactic is to dress up as a girl and sneak into the dorms. This is a pretty bad move for many reasons. It’s also one of the largest gags in the film and it gets old very quickly. Naturally Freddie falls for one of them in this form and nobody can put the pieces together. I think if you cut away this whole sub plot the film will still be pretty terrible but it would certainly have improve. This plot line just didn’t do anything to really help the film rise up. It drags on and on.

It goes without saying that there is a lot of fanservice here even though they are in the snow. Characters just don’t care about the storm at all. They’re dressed for the beach and they aim to keep it that way for most of the film. We get a lot of zoom ins and crazy dances reminding yo that the plot was not the movie’s first priority. At least the singing isn’t too bad, the series has certainly had worse songs at any rate. Then you’ve got the beach scene at the end just to mess with the audience even further.

There are moments in the film that can be reasonably funny. It’s not like the whole duration is one failed joke after the other. While a good chunk of the jokes don’t work, the surreal nature of the movie helps at times. The scene of the main character floating like a balloon was fun. Additionally I liked the Polar Bear scenes. It’s a pretty nice gag to have that guy running around. The problem is that the movie beats this joke into the ground by having the same joke show up around 5-6 times. You never want to spam a joke that often because it will inevitably get quite old. It’s going for the running gag approach but that works better in a series. If you cram it into a single movie then you are bound to have some issues.

There aren’t any characters to root for here either so you won’t be as invested in the film as you could be. The two main guys are chronic cheaters. The two heroines are too passive and ultimately try to say that the guys were right even though that is definitely not the case. Freddie starts out as a pretty intense guy but by the end he is total comic relief to make the other characters look better. The movie definitely could and should have had more restraint. Maybe make it so the heroes get a win but Freddie still keeps his dignity. The parental figure here literally goes insane by the end of the film and I couldn’t give him any consolation points either. It was rather mean of the main guys to mess with him the whole time, but it’s also partially his fault for falling for their gags. They absolutely should not have worked on him. I prefer the guardians who at least talk tough the whole time. This guy was a punching bag so you’ll sooner feel bad for him than find the scene overly funny.

Overall, Ski Party is definitely everything you expect it to be. The film is pretty straight forward on delivering everything it is advertised to be. If this is your kind of film then you’ll enjoy it. However if you want a film with good writing and an actual plot then I’d recommend staying far away from this movie. It will have nothing to offer you. At least the gang sub plot isn’t around to get dragged out forever. The car chase at the end is actually a little better without those guys around to slow the pacing.