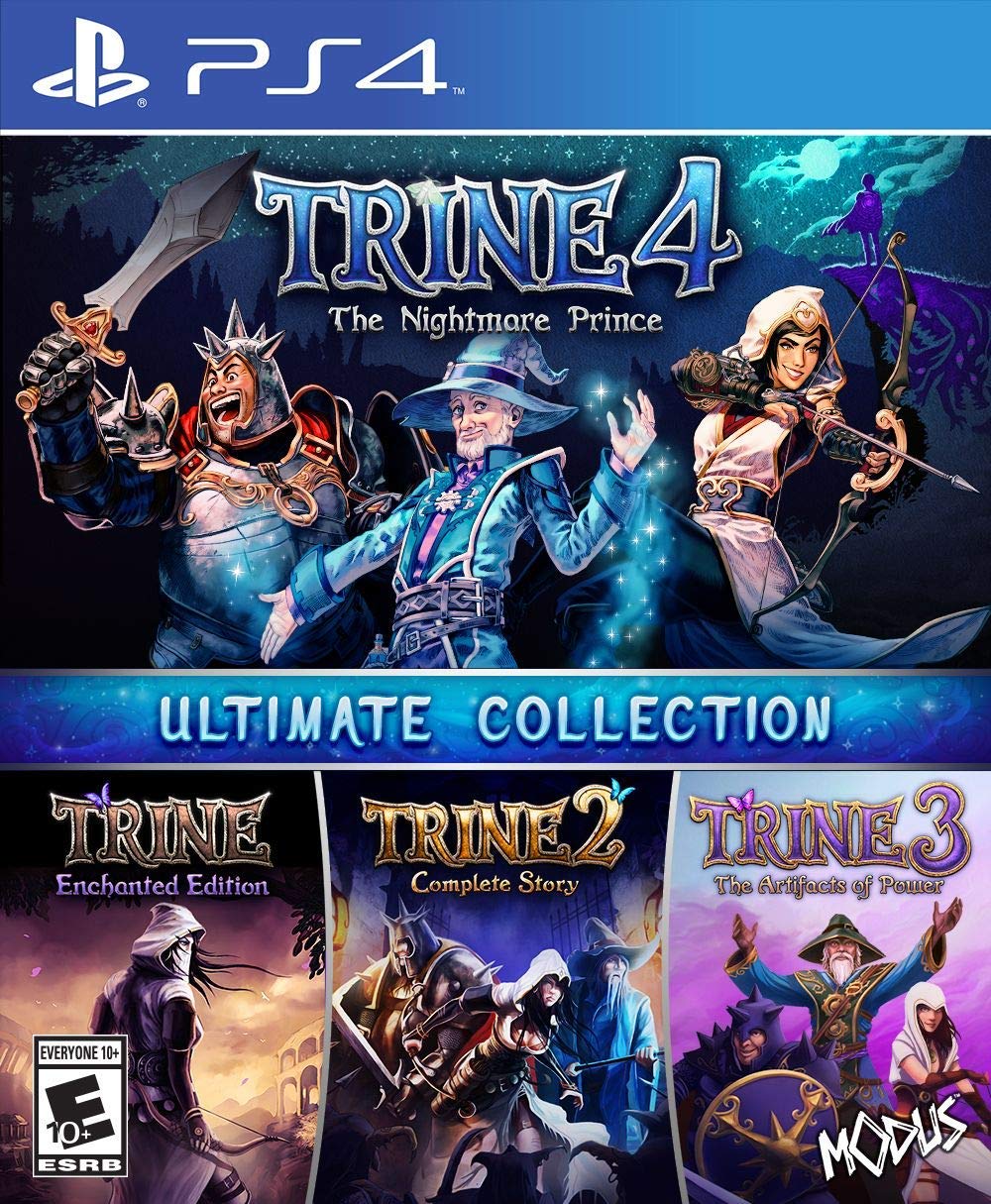 It’s time to look at the Trine HD Collection. Unlike most collections this game actually brought 4 whole titles in it which was pretty cool. I wasn’t too familiar with the games before although I did know the name. Now that I’ve played all four of the games it’s like I’ve gone from novice to expert in one shot. The games are pretty fun side scrollers and I can see why the series got so many games. They’re fun and will test your problem solving skills while giving you a fun little plot. Lets look at this one game by game.

The first Trine introduces us to the 3 main character. You’ve got a third, a warrior, and a mage. The Trine brings these three together and gives them immortality. The catch is that they must stick together now. None of the characters are thrilled about this so they all set out to find a cure. There isn’t a whole lot of plot in the first title. The gameplay is also the toughest out of all 4 of the games with not too many advanced features being added yet. Each of the three characters have their own unique talents and you can switch at any time. The brawler is a good fighter and he can slice ropes or beat up enemies. The mage can create squares out of thin air and levitate objects. The thief can swing across pitfalls and connect objects together with rope. You’ll have to learn how to master each character to deal with the puzzles.

Some of the puzzles here can be quite difficult. The levels are all pretty straight forward as you go from start to finish so the puzzles aren’t about figuring out where to go. They’re about figuring out how to get to your destination. For example you may see an extra large hole and you need to get across it. You may try swinging across with the third of creating a path there. Most of these puzzles have more than one way to get across which is fun. I would always try to cheese it with the mage by creating something and jumping across as it falls away. I feel like a lot of the time this wasn’t the intended route, but as long as it worked that was good enough for me.

You’ve also got upgrades here. You can re-distribute the upgrades at any time which was handy. Typically I would give them to the mage because his let you create up to 2 extra objects which further helps with the puzzles. A fully powered mage on your team is really all that you need in order to clear most level. The gameplay was really quite sound. Some parts could be rather difficult, but never too crazy. This is easily the toughest game in the collection so it really starts you off on a hard note.

Then you’ve got the second game. The heroes are called back into action as a kingdom is being overrun by darkness. The princess may not be what she seems and there are goblins everywhere. The heroes will have to stick together and use their abilities as a team once more. From all 4 of the games the stretch between 1 and 2 is the only one where the gameplay doesn’t change all that much. It’s pretty similar to the first one but the game is a bit easier. The controls have been ironed out further and you won’t be cheesing quite as effectively with the mage but there is less of a need to. You’ll be able to blast through this game pretty well.

With the third game things get changed up quite a bit. For starters the game is in 3D now. It’s a 3D brawler with quite a lot of fighting involved. As a result this is definitely the easiest game of the lot. It also felt like the shortest, but I suppose they’re all close. The goal is to get to the end of the level as always, but this time you will want to make sure that you stop and grab as many of the collectibles as possible. You’ll need a great chunk of them to be able to unlock the final level. I’m never a big fan of games forcing you to grab all these things. I like being able to just blast through a level and I’ll pick up the pieces for the Platinum trophy later on if I feel like it. Fortunately the collectibles are pretty easy to grab and they aren’t super out of the way. As long as you know to grab them right away then you should be good.

The plot here is the most ambitious. Someone has stolen the Trine and we have to get it back. We’ve got a character who may be related to the thief and people running around with dark energy. The story opens up a lot of questions, but unfortunately it ends rather abruptly. It seems to me like it was cancelled early on or funding ran out and they just had to release the game. It’s too bad that the fourth game didn’t continue the plot either. At this point it’s just not likely to ever get resolved. I don’t believe the 3D part was a big hit with fans either which was also too bad. 3D is just so much fun for any game. It takes the experience to the next level if you ask me. It’s hard to say that this is absolutely the best game in the series but it was a lot of fun. You’ll miss the puzzle aspect but you’ll love the combat.

Then we’ve got the final game. This one is a return to form as it plays like the first two. The gameplay has been further streamlined though and some of the abilities you initially started out with in the first two games have to be unlocked gradually as you go through the story here. The puzzles are back and there is a much larger variety of them than the last few times so you’ll have to be extra careful. There actually were some pretty tricky puzzles here so you can’t sleep on them. Approach the puzzles carefully and then you should be okay. One change that was probably inspired by the third game is there are now beat em up sections where you have to beat all of the enemies to proceed. You can expect them in each level so I wonder how the people who aren’t crazy about combat felt here. I always like a good battle though so I was definitely fine with this.

In this game we learn that a prince’s powers are going out of control. He’s able to turn dreams into a reality and unfortunately one of his nightmares created a shadow version of himself. The heroes need to get his powers under control or the whole kingdom is doomed. Alas, they aren’t strong enough to beat an unlimited imagination so they will need to go and find an item that can aid them in this quest. The heroes are pretty well experienced by this point so they are definitely ready for this challenge.

It’s really tough to rank these games, but I think this is the best time to do it. So ultimately I’d rank the games as 3>4>1>2. 3 wins the tiebreaker because I really enjoyed the hub world and the 3D gameplay was just really good. I like to see a clear progression as well an the checkpoints/easy level access was great. Game 4 is the most polished of the 2D titles and 1 beats 2 because I did really like how the puzzles were constructed.

As for the soundtrack/graphics, those areas are a little less impressive. I remember the main menu themes really well, but not much else. The games are going for a very old look so it’s intentional that this game doesn’t pop out the way that something like River City Girls does. I think the 3rd game looked the most impressive to me though. I think that’s because the game could show off more of the backgrounds this way. It all just looked so fresh and new.

If the game has any weaknesses it is that the characters aren’t very interesting. The same can be said for the plots of the first two as they didn’t really pick up until the third game. Even though Zoya is a thief and you can sort of tell what they’re going for with her character, she doesn’t get a lot to do. You don’t really buy into the mystique around her. Pontius is your classic strong but not very smart guy. He also doesn’t look too impressive most of the time. Being able to fight is great of course, but you need more than that to be a really likable character. Finally you have Amadeus who is always having a lot of trouble with his magic. He can’t perform the fireball which is still his lifelong dream. Hopefully some day he will be able to do it. In the meantime he does his best to help out, but is fairly timid.

It goes without saying that there is a lot of replay value in a collection like this. Lets say you beat the 4 games in about 20 hours then you can probably double that for the platinums. The Platinum trophy requirements actually aren’t that crazy here but they will still take some time. You’ll have to really master each level and if you’re going to get them all I’d recommend starting with the 3rd game. That way you can then focus on enhancing your 2D platforming skills for the other 3 games. You’ll be in good shape at that point.

Overall, The Trine HD Collection is definitely a title you will want to have. Being able to attain 4 games for the price of one is really a steal. It’s also pretty cool that you can get the entire series in one shot. While the games aren’t particularly long on their own, they end up being a pretty good length when you combine them. You won’t just be beating this one in the blink of an eye. If you aim to get all of the trophies then you can extend the time even further. It’ll be cool if we ever get a 5th game. If we do then I want them to finish up the story from game 3. The cliffhanger there was too good to just let go. The game easily had the best plot.