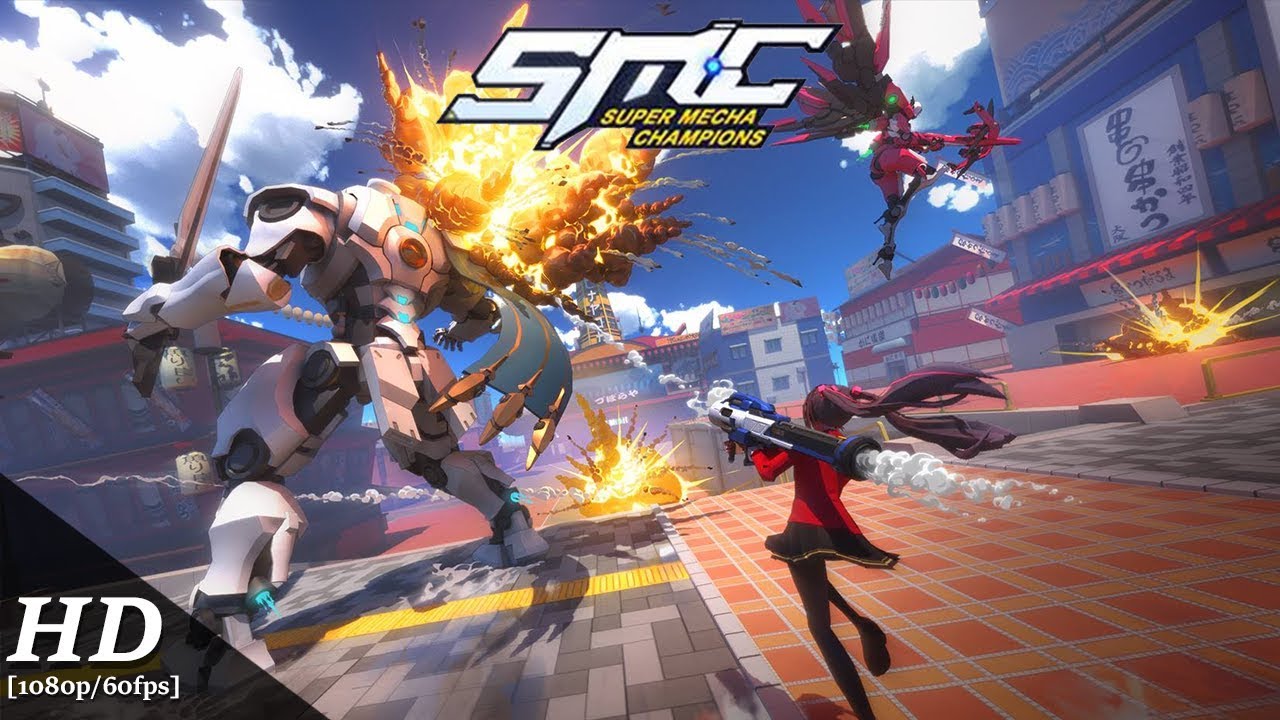 It’s time to take a look at an IOS game that always looked like a Fortnite ripoff. Granted, you can be a similar game to something else without being a ripoff but that was just my first thought. Since Fortnite is so cool I thought I’d give this one a whirl. It’s got a lot of potential and honestly with a big mainstream release for PS4 and the rest it could probably hold its own to an extent. It’s definitely pretty bare bones compared to Fortnite, but has a lot of the same gameplay aspects while throwing in its own spin.

The gameplay here is that of a third person shooter. There are 100 people running around the map and your goal is to be the last one standing. Be sure to stay inside the safe zone as being in the storm will cause you to lose health quite rapidly. You can pick up guns as you run around the island. Once you down another player and you last long enough you can summon your mecha. In this form you deal a ton of damage and can move very quickly making it a very simple matter to take down the humanoid opponents who dare stand in your way. That’s the jist of it and the controls are pretty simple but it will take practice to really get used to shooting on the phone. It’s why I had a hard time even playing Fortnite on the mobile. It’s just way different than using a controller.

I am proud to say that I ended up winning my very first match in the game. It was squads mode, but I did contribute with 3 kills. I had to quickly get the win because I was playing this while at the theater waiting for the One Piece film to start. It took all of my fundamentals to quickly do this, but it worked out well. When I tried out Solo mode I didn’t fare quite as well. I got 96th place, but I did get one kill so at least I didn’t die without landing a hit right?

The graphics are pretty sharp. It’s all very colorful since you’re playing in a futuristic city filled with anime characters and giant robots. In terms of visuals it’s even more colorful than Fortnite. Fortnite still has the better graphics overall, but Super Mecha Champions is just very nice to look at. When it comes to the music I don’t recall any big themes from this game. At the very least there isn’t a sound as unique as the battle bus leaving.

You get bonuses for logging in every day like new mech suits. I don’t think they give you any special abilities are are like the Fortnite suits, but I’m not positive since I didn’t test any of them out. I just wanted to get in and test my battle royale skills. The map is quite huge so if you want to live it won’t be too hard to do so. Especially with how fast the characters move. One thing that will grate on you a bit though is how long it takes to travel from point A to point B. It definitely feels longer than Fortnite at times and I think that’s because the running speed is slower here. It’s not a huge deal but I imagine if you were to play the game more often then it would quickly start to take its toll on you.

Overall, Super Mecha Champions is a fun game, but one that is too big for a phone title. As great as the app games have been over the years there are still some limits to the IPhone. We saw that with the Sword Art Online game a while back where it played like the PS4 titles. That’s very impressive of the developers, but it’s just tough to truly appreciate it on the phone. The controls also aren’t quite as well suited. Of course most of the games can now use console controllers to play now so that’s a big improvement as well. A real controller makes a pretty big difference. If you like Fortnite a lot and want to take a look at what it might look like on the mobile then this is a good game to check out. At the same time, you could literally just play the actual mobile Fortnite game instead so odds are that you wouldn’t need to try this one out. I’ll give the game props for managing to copy so much of Fortnite though.