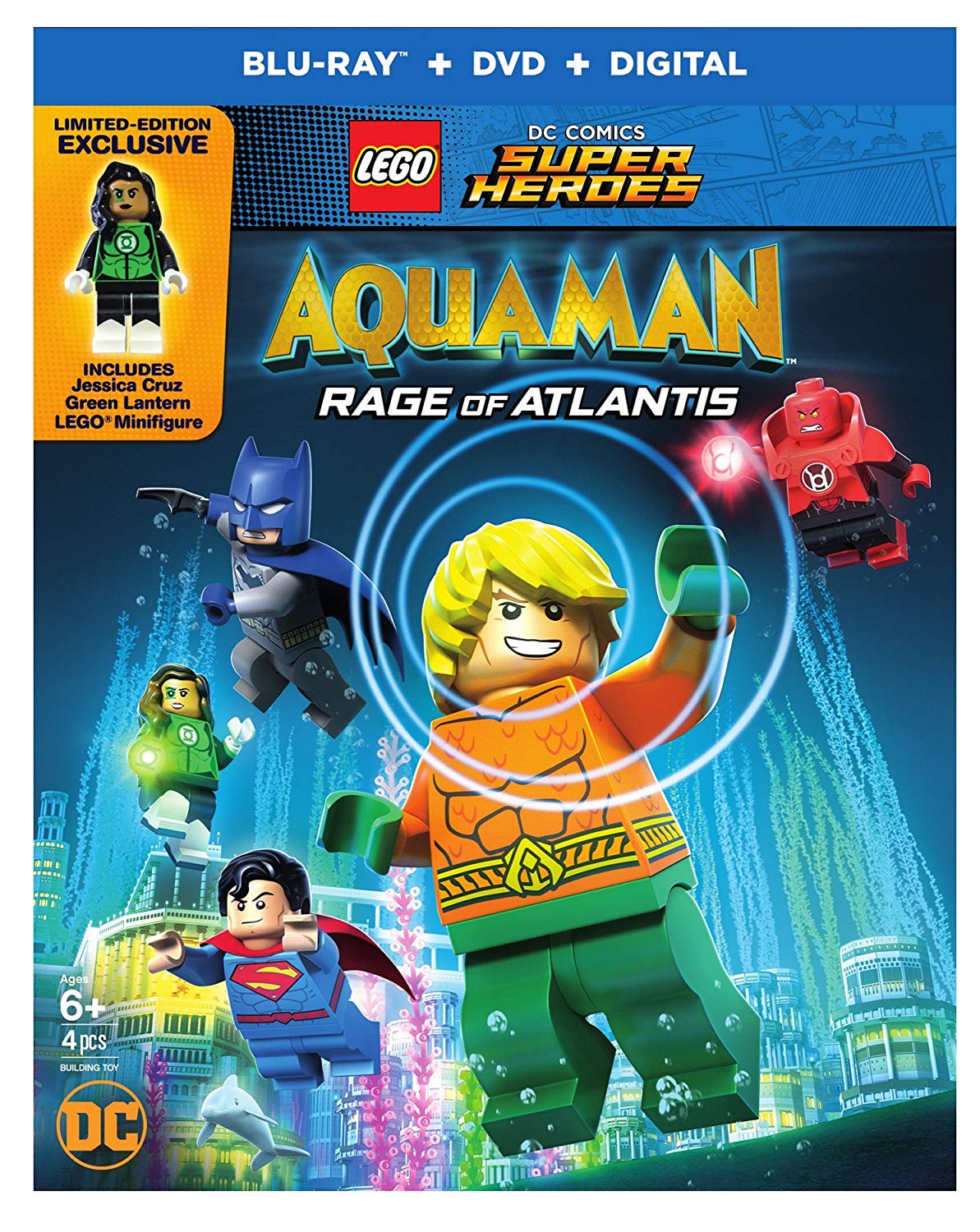 It’s time to look at the next big LEGO adventure. This time Aquaman takes the center stage as he tries to prove himself. It’s a pretty fun LEGO adventure and while it can’t quite match up to the best ones out there, it holds its own pretty well. We get some decent fight scenes and it’s always fun to see the Justice League return no matter what format it is. So without further ado let’s dive into this.

The film starts off with the Justice League sending out a call for help to Aquaman. He is delighted to hear this, especially because the villain is attacking a river so he’ll be able to do some real damage. Unfortunately this area is just called a river but it’s totally dry so Lobo beats Aquaman up. Aquaman struggles to hold onto his confidence but even the Justice League can barely defend him in faqront of the media and Ocean Master has now taken over Atlantis. If Aquaman doesn’t regain his confidence really soon I’m afraid that it’s going to be too late for him.

DC’s been doing quite well with the Lego adventures and this one continues the run of solid titles in the franchise. While Aquaman can’t hold his own film nearly as well as the Flash, he’s a fun enough lead. We really hadn’t seen him in the other specials so this was a good way to give him some focus with the league. Naturally a lot of his scenes are played for laughs. Most of the characters land a lot of burns at his expense but Aquaman does his best not to let it get to him. He still keeps on trying to be the best and after he gets drunk Aquaman finally experiences some clarity on what he has to do next. It took him a while to get to the answer, but better late than never right?

The Lego animation is fairly consistent with how all of the others were. Lego in general still isn’t my favorite style but this one still gives us some pretty good fight scenes. Superman surprisingly (well maybe it’s not too surprising) doesn’t look great in the battles though. Lobo is just too powerful and really deals out the pain to everyone who goes up against him. It’s always nice to see him looking good though since Lobo is often one of my favorite DC villains. I like his biker theme and the fact that he actually can fight with the likes of Superman. His appearances in the DCAU is really what got me into being a fan.

Meanwhile the humor is pretty sound as you’d expect. My favorite humor scenes are admittedly the ones that are poking fun at Aquaman a lot. It’s the low hanging fruit of course, but you can’t help but smirk when Ocean Master shows his little compilation video of Aquaman getting wrecked. The humor scenes that don’t work quite so well are the more over the top ones like when Wonder Woman gets dazed/confused for a while. Damian trying to act like a kid also doesn’t work quite as well. I was surprised to see him and Batgirl since they basically come out of nowhere, but the more guest stars the better.

Ocean Master makes for a fun villain. He may not always be the biggest mastermind but he did convince Aquaman to give up the throne without a fight which does take a good degree of skill. A lot of villains would love to be able to say that they took over Atlantis without having to lift a finger. It’s usually just not that easy though. Things may not have worked out well for him in the end, but if not for the rest of the heroes being around he probably could have pulled the whole thing off. There’s also the slight sympathy angle that any story with Ocean Master comes equipped with because Aquaman tends to put him down without realizing it. “It’s good to be king!” was definitely something that Ocean Master doesn’t need to hear from Aquaman on a daily basis. Still doesn’t make him any less of a villain though.

The most tragic part for Ocean Master though is the fact that he starts to be overshadowed by the other villains here like the Red Lanterns. How can he really hope to compete with powerful foes like that? Dex-starr and Atrocitus both get fun roles and you don’t really doubt that either one of them would be able to clobber Ocean Master. It was a cool team up though because that’s one of those out of the box pairings that seems like it would be interesting.

Meanwhile we have a full subplot about Jessica Cruz working to find confidence in being a Green Lantern. It’s not as good as the main plot, but it’s decent. Most of it involves her ring giving her a lot of snark as it constantly mocks Jessica and makes things tough for her on purpose. Honestly Jessica has enough trouble trying to be a fighter, the ring doing its thing really doesn’t end up helping matters at all. It just ends up getting in the way and making trouble for both of them. I lost a lot of sympathy for Jessica when she started making fun of Batman’s utility belt though. The first time you can write off as an accident, but after that it has to be intentional. It may have been a humor plot, but it still hurt Jessica all the same. Especially since Batman was the best character in the special. One simply does not disrespect the Dark Knight like that.

Overall, Rage of Atlantis is a fun DC special. There’s not a lot more to say beyond what I’ve already mentioned. If you like Aquaman or the new Green Lantern Jessica then you should enjoy this one. Quite a lot of characters show up and so the special is able to make the most of its longer run time. I wonder which hero will get a lego special next. I dare say that Green Lantern has earned his, but I wouldn’t mind another Batman centered JL special either. Those are always fun.