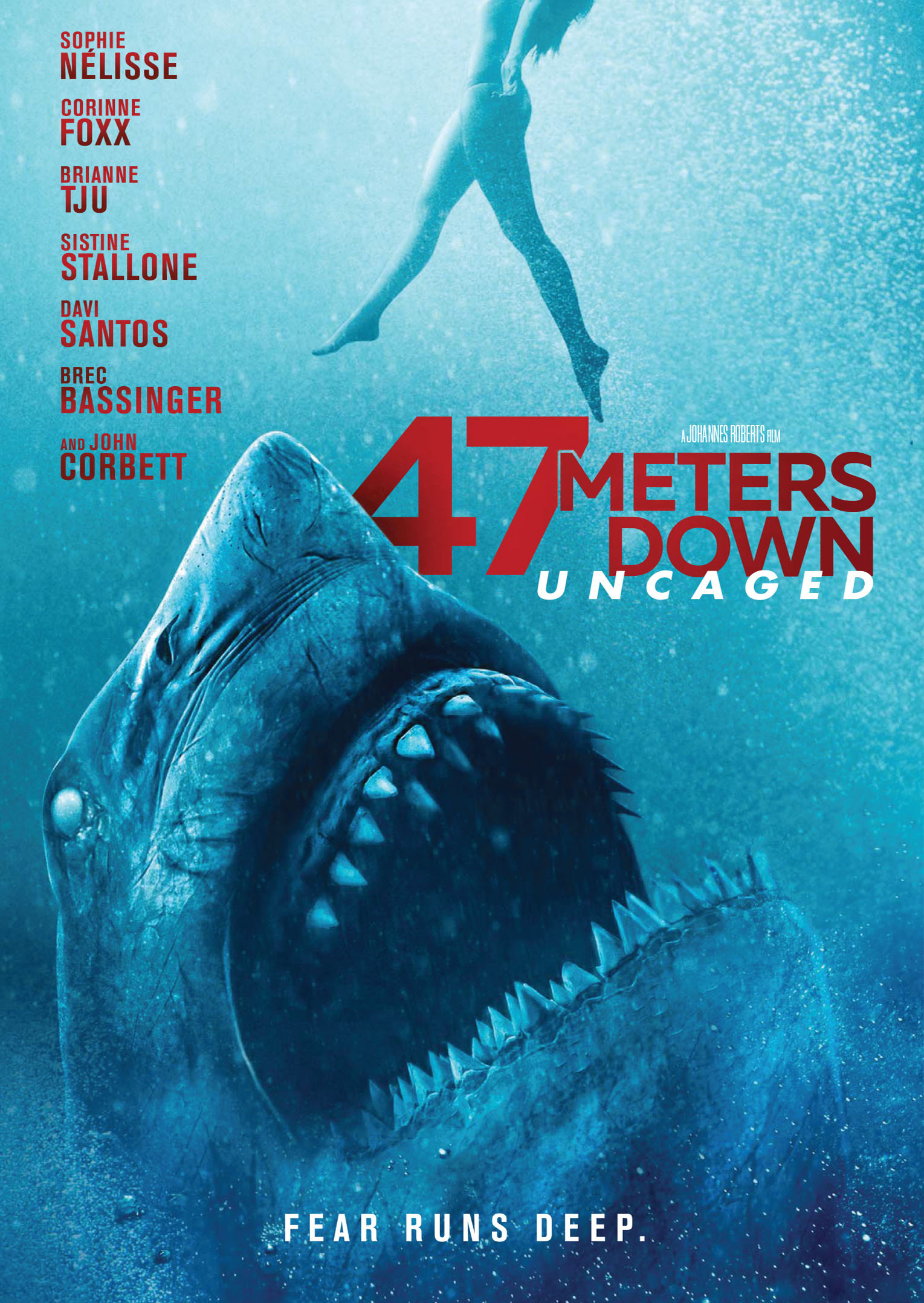 It’s time to look at the sequel to the original 47 Meters Down film. I can’t really say that it’s much different from the first film. In general I don’t think the plot leaves the movie a lot of room to be all that good. For starters there is almost guaranteed to be some kind of animal violence in a film with sharks all around. On another note the ocean setting just isn’t great. Give me the city any day. You more or less know what to expect in a film like this and I’d say that there are no surprises here so you really shouldn’t be surprised one way or the other after watching it.

The movie starts of by introducing us to Mia and Sasha. Mia was adopted into the family and doesn’t have a great relationship with her step sister Sasha. Mia gets bullied all the time in school such as being thrown into a pool and Sasha never steps in to help. Their parents decide to get them to spend time together by having them spend a day in one of those underwater shark tanks. Neither girl is excited about this, but orders are orders. Sasha’s friends end up appearing though and convince the two to ditch the plans and head to an abandoned underwater city. Despite being warned not to go anywhere near this place the 4 girls head down and promptly break the entrance so nobody can get back out. Now they are stuck underwater with some very large sharks and a dwindling air supply. Which girl(s) will make it out of this alive?

As per slasher film tradition you can more or less guess you will live through this film by the end. If you’ve seen enough of these films you’ll likely guess 100% correctly. The main thing to keep in mind for horror films like this is that karma hits really quickly and even an innocent mistake will be remembered and used against you. The main character typically has plot armor so the question is if the armor will expand to protect someone else or if everyone is doomed. I’ll let you make you guesses and think about it. This review isn’t for spoiler details like exactly who survives.

That being said, there isn’t a whole lot of fun to be had in this movie. I also think some parts randomly drag a bit. The intro is a good example of this. The film starts off with a nice atmosphere as we see a bunch of skulls and some good underwater visuals. Then…this scene keeps on playing. After a few minutes you’re waiting for the actual film to start. We then get a super slow shot of someone falling into the water before the film finally starts. The whole thing was way too long and destroyed the potential effectiveness of the scene. It was a little unfortunate because otherwise you do always want a suspenseful start like what the film was trying to go for.

Another thing hurting the film is the cast of characters. There aren’t really many likable ones to be found here. Sasha’s friends come across as rather fake as they clearly don’t like Mia but put up with her since they want to hang out with Sasha. They were quite willing to ditch Mia which would have left her alone with the bullies and no supervision. Those aren’t really the best friends to ave at the ready even if Mia seems oblivious at times or is just trying to make the best of the situation. It’s also hard for Sasha to recover from the opening scene. Even if she doesn’t like Mia all that much they are sisters so you’d expect her to at least help when the bullies are around. Letting Mia get pushed into the water like that was pretty bad.

The parents are good characters at least. There’s only so much they can do to get the two step sisters to get along, but they do their best. Their heart’s in the right place at least. Mia admittedly doesn’t make things any easier, but we can assume that this has been going on for quite a while so by now it’s easy to see why she’s pretty upset. You can only be bullied for so long before you start to feel pretty down all the time. Also the bullies do outnumber her 4-1 so it would be pretty hard to fight back as well.

As far as the writing goes, the film’s not great but I’ve seen worse. The characters are all pretty obnoxious and make all of the worst decisions so it’s hard to root for them. They are intentionally breaking as many rules as possible which isn’t great and one of them was mainly responsible for everything going wrong by swimming off by herself. Nicole is easily the worst character by the way. You’ll see why if you watch the film as she is directly responsible for just about everything that goes wrong here. The teenagers are the stereotypical ones you’d expect to see in a film like this. It’s a shame that teens have such a bad rep. No worries we also get the “teens always have earphones on” part so someone doesn’t notice people about to get eaten right in front of him. It’s all pretty tragic for all parties involved.

In terms of violence the film does get pretty intense so you’ll want to watch out for that. There is some shark violence as expected which is also a shame. This is why films like this should either go for Mummified Sharks which can’t bleed or robotic ones. That would go a long way to making the film a lot better. Otherwise you are guaranteed to hit this snag and that’s just not going to end up well for anyone. An underlining theme in the film is that you have to resist peer pressure or you may get eaten by a shark. It’s a pretty solid morale because while that may not be what literally happens to you in real life, peer pressure can often lead you into some pretty sticky situations. You really want to learn how to resist that early on.

Overall, 47 Meters Down Uncaged is not a film that I’d recommend. Having access to the rest of the ruins makes for a much more engaging backdrop than being stuck in a small cave, but being underwater was never great anyway. Having sharks as the main villain is a self defeating concept and the characters weren’t that good. Even Mia as the main heroine wasn’t all that solid. If you really like shark films then you should check it out. There’s a homage to Deep Blue Sea that you’re bound to recognize because it’s basically the exact scene copy and pasted into this film.