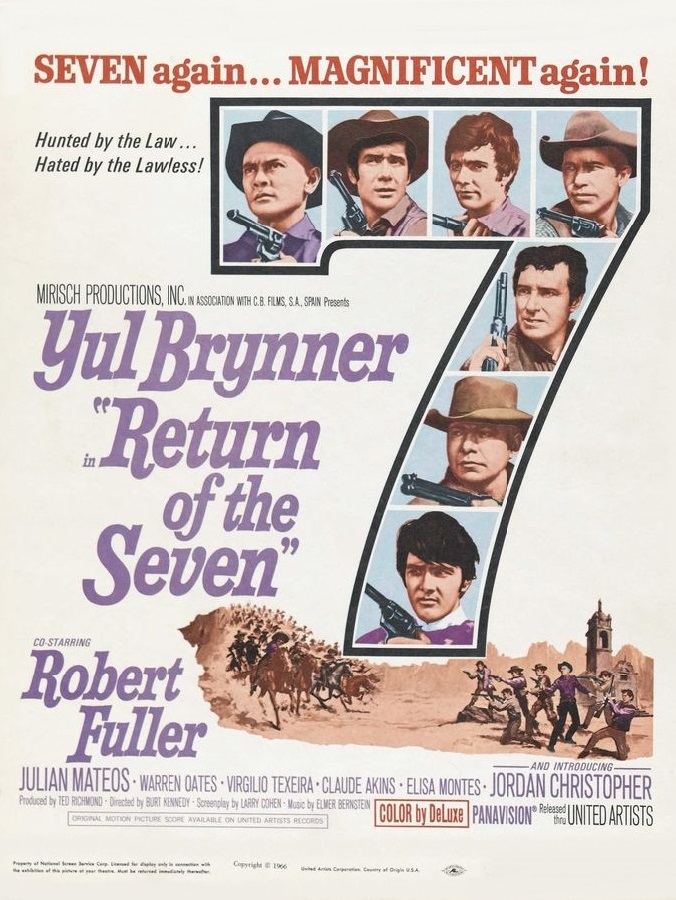 It’s time to look at the sequel to the Magnificent Seven. After seeing how solid the first one was I was hoping that this one would at least be in the same league as the original. Unfortunately this wasn’t meant to be. I guess the first one just set the bar a little too high because the sequel ultimately couldn’t even come close to the first. It ended up trying to copy all of the ideas but executed them all in a less effective fashion. Sometimes it’s just not enough to try and copy success.

The film starts out with the village from the first film getting attacked yet again. While Chico tries to fight them off he goes down after beating only 3. All of the men are kidnapped except for one who manages to get over to the main characters and asks for help. Chris and Vin got reunited when Vin reveals that there is now a bounty on Chris’ head. Vin has arrived to help him stay alive during this time. Now with news of the village being attacked Chris is forced to become a hero once again. Since most of the gunmen from the last film were murdered Chris needs to assemble a new squad. With all of the best fighters already out of commission he will now have to grab some of the B listers and man does the film try to make them as unlikable as possible. Can this group of 7 manage to stop the villains?

Here’s the problem with the film. It’s exactly the same as the last one. Usually a sequel will try to at least disguise itself as being a little different by switching up the characters a bit or making the circumstances new and unique. This film doesn’t bother with any of that to even the slightest degree. The villains are almost the same number as the last group only they have significantly less character. Chris assembles a group of hot shots once again only these guys don’t get any big intros and they are all pretty terrible from the jump. The group is assembled within the first 15 minutes. This sequel feels like it’s going on turbo speed right from the start. It cuts out all of the development time we had in the first so we can skip straight to the fights in this one.

I think the film is shorter so they didn’t have as much time as in the first film but it still could have done a better job. In the first movie at least everyone was actually here to help out the village for positive reasons. That’s not the case in this film with one guy in particular who may as well be a villain himself. He causes crimes constantly and was in jail for good reason. It’s a lot harder to root for the heroes this time around. The movie also did Chico dirty by having him lose almost instantly. Remember how he got a huge character development arc in the first film? Well, neither does do the writers of this film so you’re okay on that front.

Chris is still a good character, but he’s a lot less mysterious than he was in the first. His skills also seem less extraordinary here. He may just be acting modest but he does seem a little more nervous of the new characters here in general which is never a good look. Vin also gets less to do here. He’s still a fun sidekick and there’s nothing particularly wrong with him. I don’t get why he was so bored that he had to look for Chris though. He seemed to have had a pretty good set of goals in the last film as a drifter. No sense in giving that up now.

From the new guys first off we have Colbee. He’s the worst character in the film. All he cares about is women and he always makes it a point to go after married ones which just makes him a deplorable character from the start. It’s hard to tolerate the guy and since he’s a main character that’s a problem. Then we have Manuel who participates in cockfights. I can’t just overlook that either. It’s a terribly inhumane sport which has no business being here and the scenes in general don’t do the film any favors. We’re already down two gunmen so that isn’t a good sign at all. He’s meant to be the new Chico but the guy was getting washed in his first fight without throwing a single counter. I don’t see how this guy could possibly help the group out at all.

Frank is reasonable. He talks tough throughout the film at least so there’s that. From the new characters he is probably the best by default. At least he seemed like a decent character. Then you have Luis who is okay I guess. He doesn’t have a ton of character but he is skilled which is the important thing. The group manages to hold their own against the villains pretty well all things considered. Without the dynamite they would have been doomed in the end though. Dynamite is always a game changer so it’s important to have that on your side. With it you know that you always have a chance in battle.

The gunfights are solid as always. The opening fight when the gunmen first make it to the village is pretty good as we see them all firing at once in a pose similar to the first Avengers film. They all just start blasting and manage to take out most of the villains in an instant. Of course it was just the advance scouts and more fights would come, but it was a good start. I definitely had no issue with the action.

The pacing isn’t bad. It’s extremely fast for sure and I do think more time to develop the characters would have been nice, but in principle it’s not a bad idea to have things happen very quickly. The issue is that the characters just weren’t very good. The writing is also not nearly as strong as in the first film. Nobody acts quite as cool and professional as they did in the first film. We also had fairly pointless scenes included like the bull chasing and the cockfighting. Both scenes really should have been cut and the film would have been better off for it.

Overall, While the first film was one of the best wild west films I’ve ever seen, this would be one of the weaker ones. The whole movie feels redundant as it’s just a carbon copy of the first movie with weaker characters. The villains don’t really get to do much and even their overall plan isn’t quite as intense as in the first one. At least there the guy was trying to feed his starving men. Here these villains are basically lackeys. If the first film didn’t exist this one may have fared a little better but at it stands I couldn’t really give it a thumbs up. If you really loved the first film and want to see the characters again then by all means you should check this one out. Otherwise I’d recommend giving it a pass and just watch the original again.