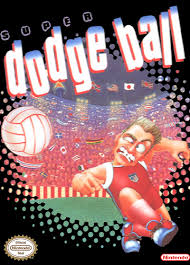 It’s time for another retro NES game and I have to give this one major props for actually going above and beyond the game. You actually get to travel to another dimension in the final levels and the game gets a bit supernatural. I mean, you’re probably not playing a Dodge Ball game for that, but it’s still a nice addition if you ask me. You get to fight all of the other countries during the Arcade Mode and the final boss takes you into space. Then there is an extra bonus challenge where you fight zombie versions of your characters. It’s like looking into a mirror and fighting your distortions which I was not expecting in a game called Super Dodge Ball.

In a way the retro sprite style helps to build the atmosphere. It’s like how Undertale changed the game for most people with what you could do with sprites because of the atmosphere. It’s possible that if this game was more polished it wouldn’t look quite as intriguing with the backdrops because maybe it’s not meant to be space or your shadows in the final level. It’s all in how you interpret it, but I was definitely impressed. The gameplay took a little time to get used to though. I had to look up the controls online but after that I was ready to dominate. It’s actually a lot of fun and I always thought Dodge Ball looked pretty fun in real life as well.

The goal is of course to tag your opponent with a dodge ball at top speed which will take some of their health away. You win when you’ve tagged all 3 of your opponents enough times for them to be knocked out. When they throw the ball your two options are to catch the ball or dodge. Catching is the best way to counter though because dodging usually lets the ball get back to the opponent on a convenient bounce. Also in this ruleset catching the ball doesn’t tag out the guy who threw it, but it does give you possession back which is very helpful. The controls are also pretty in depth with each character having several super moves.

You can use a running start to throw a softball at the opponent or you can jump and fire a spiral shot. There are quite a few moves but my favorite is the running jump super charge. If you land that you can deal around 30 damage compared to 2-3 for standard shots. It’s also hard for the opponent to dodge. If someone tries it on you I recommend trying to jump out of the way. You can jump really hard in this game but the catch is that you can’t move after jumping so if they pretend to throw but don’t then you could be in quite a bit of trouble there. It gives the game extra depth.

I think you can already see why this is one of the better NES sport games. For sure I can say that it has more personality than a lot of the others and you can really feel the care and passion behind this one. The gameplay is actually a lot of fun once you really get the hang of it so I recommend looking up the controls to make sure you enjoy this one. If you don’t know how to play then there is definitely the chance that you will give it a thumbs down and that would be unfortunate.

Overall, Super Dodge Ball is a fun title. The length and amount of content are naturally quite limited, but even if you just play it for a quick playthrough it’s worth the experience. There aren’t a lot of dodge ball games out there so it’s also pretty unique which is a plus as well. Throw in the fact that there is virtually a story mode and you’ve got yourself a winner here. This is definitely one NES game that I won’t be forgetting anytime soon.