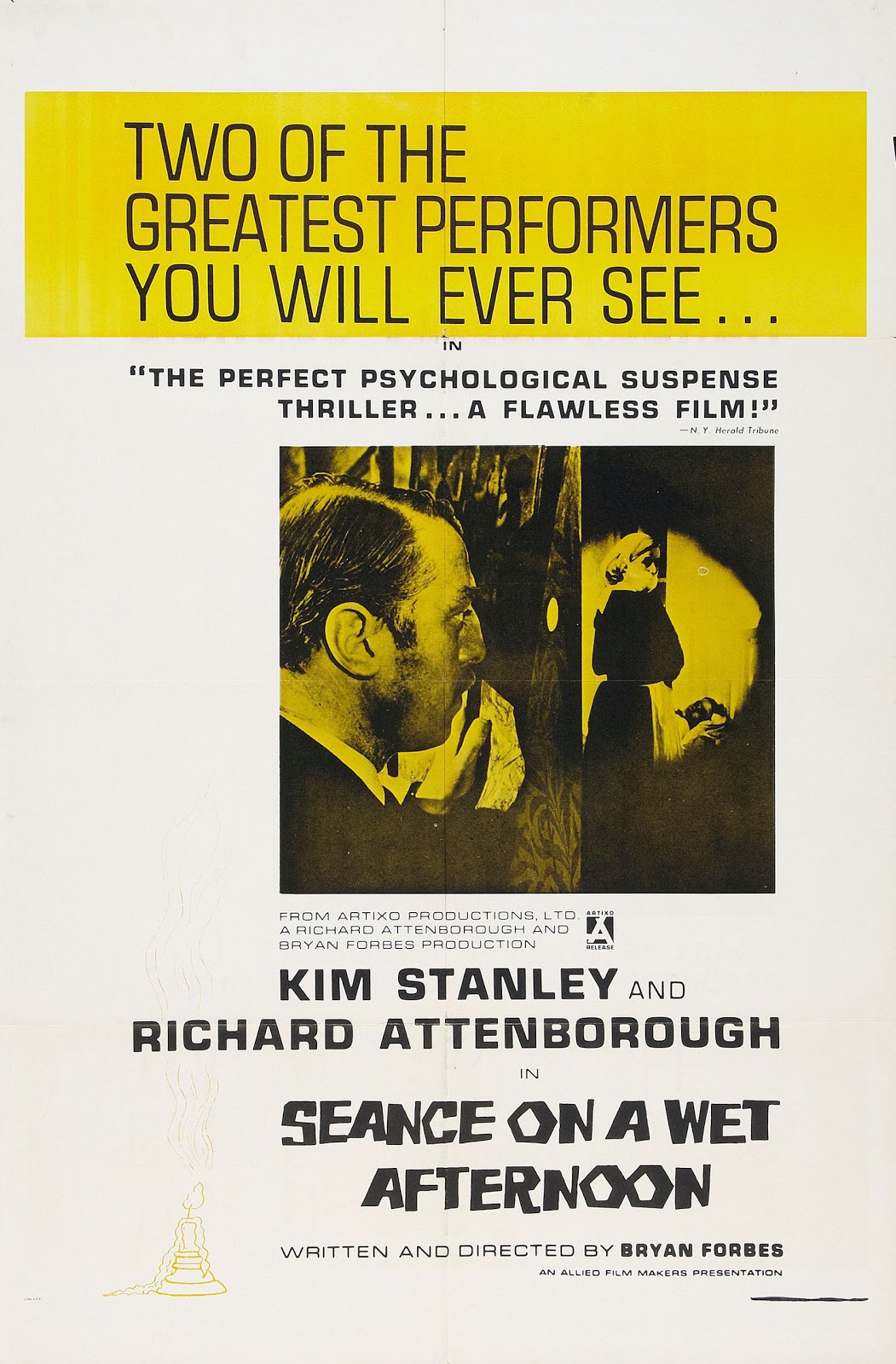 It’s time to look at an old film about a couple of insane people trying to see what’s worse, being an insane criminal or being a gutless accomplice. The two of them duke it out for the whole film on which character is worse. For my money I’m going with the accomplice because at least the villain is straight forward with this. The accomplice is always offering some justifications and half heartedly saying they should stop. This is definitely a film that drags on for quite a bit so be prepared.

The movie starts with Myra hosting another seance with a group of her friends. Afterwards she tells Billy that it’s time to enact their plan. They’re going to kidnap a kid and will hold her for ransom for a while. Once the cops are unable to turn up any leads she will use her fake psychic powers to tell them where the kid is. At that point she will be rich and famous just like she’s always wanted. Her husband Billy is less sure of the plan but he’s not even sure of his own sanity so Myra sends him to get the job done. Kidnapping the girl is criminally easy because everyone is negligent in this film so once they have the girl Myra gets her plan into action. The only tricky part is that aside from every part of the plan being pretty insane Myra’s own fragile psyche is getting worse and worse. Soon she may not even be able to speak rationally.

Obviously I don’t have a whole lot of respect for these two characters. Myra is portrayed as insane from the start and is just super lucky that she has Billy here. He does whatever she said. Even when she turns off the music and Billy sees her do it, she just says that he did and he accepts this. Billy accepts whatever Myra says to pretty crazy degrees. The whole opening scenes are basically just Myra making a long speech and doing whatever she wants and telling Billy he better agree to it. These scenes are a chore to get through in part because of her but definitely because of Billy.

Billy is one of the most annoying characters in a while because the guy just acts defeated in every single scene. He somehow is able to pull off the kidnapping and stealing the money despite all of this which is a stretch. What kind of designated driver for a super rich family just leaves the car alone and unlocked with the key in the ignition when a stranger is there? The whole thing was super suspect and he should have taken the kid with him. Billy had no real backup plan either so the whole thing was based on a lot of luck.

The villains are also asking to be foiled the whole time by doing things like having a seance with one of the parents while the kid is right upstairs. The room also didn’t seem very sound proof either and the kid should have done something. That would have been a tougher spot but yelling a bit would be ideal. The only good characters here are the parents. I’m glad that the father wasn’t falling for the supernatural nonsense. The Mom gave the main characters a little more of a chance and got pretty emotional but I won’t blame her either since the situation is so intense.

Going back to the plan though, even if Myra did use her “abilities” to find the kid it’s not like the cops would believe her. That would just throw even more suspicion on Myra being the one to kidnap her since she was already making that point pretty obvious early on. At the end Myra even wants to murder the kid and that would really seal her fate. That’s the thing with having main characters like this though, it’s never going to make sense in the end.

Ultimately the film doesn’t go for the ultimate grim ending which is good because that would have been an easy way to hit 0. The ending isn’t bad but it doesn’t help the rest of the film. The whole scene of Myra cracking in the climax as she talks to herself goes on for a very long time and it’s all nonsense so you wish the film would just gloss over it. Since we know she is crazy from the jump I think it’s fair for us to just skip the scenes entirely. You already get the point of the film. The cops did good even if the one detective should have been more confident. I liked the code of how they would pretend to be talking about a car radio while trying to identify Billy as the thief from earlier. The detectives did a lot of beating around the bush and passive aggressive talk but at the end of the day they got the job done and that’s what counts.

Overall, This is definitely a movie that I would advise you to avoid. There’s really nothing positive to say about it. The whole movie is very slow and the main problem here is that all of the focus is on the main two characters and they’re not likable in the slightest. They’re just petty criminals who are also insane and I think it’s pretty much impossible to have a quality film about such leads. The film should have been from the focus of the detective or the cops. That would have made for a much more interesting story at least and the film would have been better off with that change.