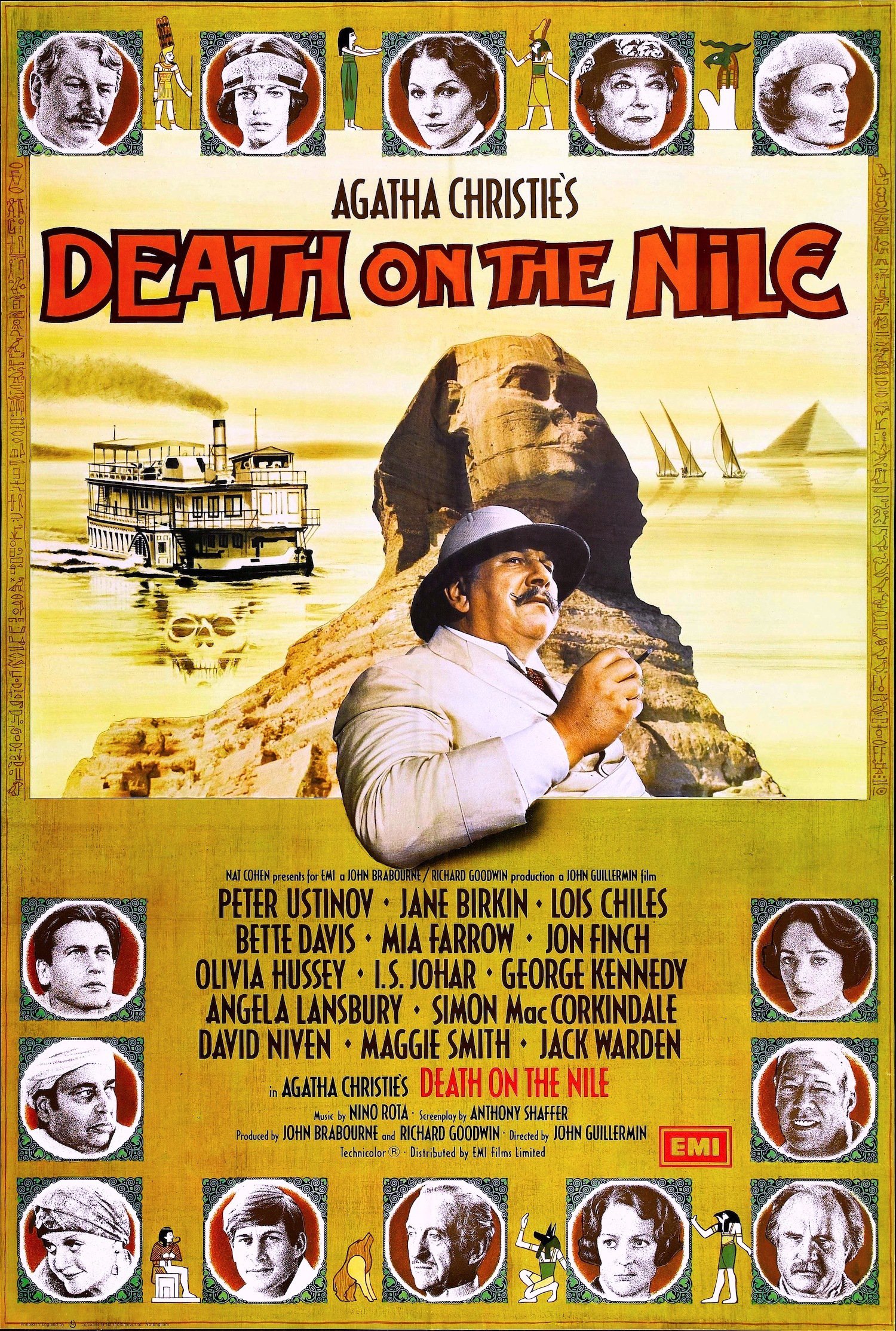 It’s time to look at a mystery film. Both versions of Murder on the Orient Express were quite great. I do tend to enjoy a good mystery after all and a boat is a decent setting. It’s definitely not as good as a train setting but it’s close enough. This is a solid film although it can’t really hold a candle to the Orient Express. It would have been hard for any film to follow that up though and I’d say that this one does give it a good shot. There are a good amount of suspects and the film is fair in letting you decide who the culprit is.

The movie starts off with Linnet finally heading back home after being away for a while. She is quickly introduced as a very rude person who flaunts her wealth with no remorse. Her friend Jackie convinces Linnet to hire Simon as the head of the estate because Jackie and Simon are engaged but both don’t really have any money. This is a pretty iffy request if you think about it and while it’s not personal, that’s why you don’t hire friends. Regardless, Linnet hires Simon, but turns the tables on Jackie by quickly stealing him away. The two of them get married and now Jackie stalks them wherever they go. Linnet and Simon decide to get on a cruise to get away from her but Linnet is quickly murdered. Fortunately, Poirot was on the cruise and now it’s up to him along with Colonel Race to get to the bottom of this. It’ll be tough though since everyone on the cruise has reason to murder Linnet.

One thing about this film is it does take a loooong time for the murder to happen to the point where I’d almost consider that to be a spoiler. Still, it’s technically the main plot so I included it in the summary but if you go in blind it’ll probably be extra fun although you would suspect it early on. I think parts of the opening could have definitely been trimmed to get to the murder and investigation a little earlier though. We need a lot of the scenes to establish motives and all, but parts still could have been trimmed up some. It wouldn’t be necessary depending on the cast but most of the suspects aren’t all that interesting here compared to the first film.

The film successfully shows Linnet to be a rather mean person. I do think that her reactions were a bit extra the whole time though. Just having Jackie show up everywhere shouldn’t freak Linnet out each time. Just take it in stride already. I do have to question how Jackie has enough money to follow them everywhere though. She apparently didn’t have much money earlier and I don’t recall any scenes saying she inherited a ton of money or anything like that. These details are minor in some respects, but in a way the whole case depends on these two details which is a bit iffy. There are a lot of other things Linnet could have done that would have changed everything. I think in part that’s what also makes this a weaker case than the first movie. Everything has to go absolutely perfectly for the murder to work out to the point where it’s less believable than the events of the first film.

Naturally I won’t say who the murderer is, but when the method of the murder is explained it’s rather hard to buy into. It seems as if everyone on the ship was deaf and didn’t have very good eyesight. I can’t say much more than that without it at least hinting as to who the murderer is, but I wasn’t sold. Even considering that though, the film does give you a fair chance at figuring out the murderer. You just have to decide whose motive is best and also how well each of their alibi’s stick. Since every character has an alibi you get to determine which one doesn’t hold true. It’s a pretty fun mental exercise as the film plays out. So even if the ending may be a bit tricky, the case itself is nice and engaging.

Poirot makes for a fun lead. He’s definitely very confident at all times which is really good for a detective. Who wants a detective who doesn’t believe in his skills and gives luck a lot of credit? Poirot also enjoys messing with the others quite a bit and also likes a nice meal. He doesn’t let a bunch of murders get in the way of his appetite. Race makes for a fun sidekick as he follows Poirot around. While he may not be quite as quick to figure things out as the sleuth, Race is definitely helpful here because without him Poirot wouldn’t be able to just run around everyone’s cabins so easily.

Lets take a look at all the suspects now. First up is Jackie who has threatened to murder Linnet quite a bit over the course of the film. She has a gun in her possession and the motive is naturally so that she can be back together with Simon. Simon’s motive is easy, the guy doesn’t have a dollar to his name and so if he murders Linnet then he gets everything. The guy is obviously flighty given how easily he leaves one engagement to the next so maybe he’s found someone else. You’ve got Louise who has worked for Linnet for many years. Unfortunately for her Linnet hasn’t given her any inheritance yet to go and be with a guy who’s already married. Linnet tried to explain why this would be foolhardy but Louise wants her married man and may do anything to get some money.

Then you have Andrew who has been stealing money from Linnet for years. Now that she’s married it will be a lot harder to do so without getting caught despite the husband admitting that he loves to sign things without reading them. If Linnet gets bumped off then nobody can ever prove that he swindled the money from her in the past and he will be home free. Schuyler is an old lady who loves precious gems like the ones Linnet owns. There’s no way Linnet would ever part with them so perhaps knocking her off would be the best way to grab them. That would settle the matter pretty quickly. Then you have Schuyler’s maid whose family was ruined by Linnet’s father. This forced the maid to lose everything and work as a maid to a cruel boss. The maid refuses to even talk to Linnet.

Salome writes a lot of romance books but she is being sued by Linnet for some similar characters. Salome doesn’t have a whole lot of money and wouldn’t survive this lawsuit so one way to end things would be to take Linnet down once and for all. Rosalie is Salome’s daughter and her motive is pretty similar. If she can take Linnet out of the picture then her mother won’t go bankrupt and their lives can resume as normal. Jim is a guy who doesn’t like rich people very much and especially not Linnet. He mentions several times that somebody should bump her off so perhaps he nominated himself for that role. If he were to take her out then the world would be closer to being balanced once more. Finally, we have Ludwig who has been taking a lot of heat by Linnet for various treatments he has given that did not work out. Several of his patients have even died and if this publicity keeps up then he will be destroyed. The only way to stop her from talking would be to silence her.

So those are all of the suspects and motives. As you can see there are a ton of suspects here. Part of why the film is so long is that it tries to develop all of them. Some of the characters look real similar too so it can be easy to mix a few of them up. Still, the more suspects the better because that gives you more options and makes picking the correct culprit a whole lot more difficult. One tough thing though can be that at times some of the accents are a little tough to follow. Race comments on that quite a few times since Poirot loves to troll him by speaking in French. It’s always suspicious when someone isn’t talking in English.

Overall, This is a pretty fun film. The first half is a bit on the slow side but once the murder happens then the film picks up as you would expect it to. The writing here is definitely pretty solid. While I do have some issues with how the death ultimately occurred I still wouldn’t say that it is totally impossible either. It just comes across as very convenient the whole time. I had no other real issues here. If you want to see a solid murder mystery with a lot of moving pieces then I definitely recommend checking this one out. You can’t really go wrong with a quality mystery after all.